With a new year underway, the Appalachian oil and natural gas industry is focused on many of the issues it faced in 2017, but above all else the leading trade groups want to keep their thousands of upstream, midstream and supply chain members competitive in what remains a challenging environment. 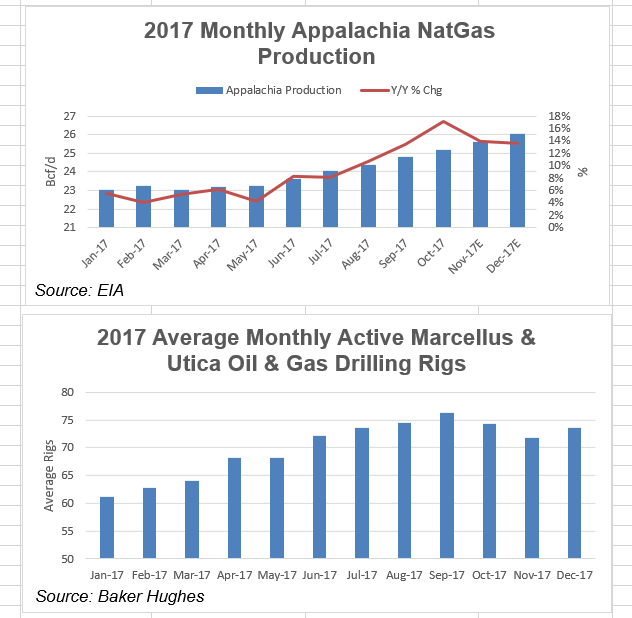 “We want to make sure that we’re a capital competitive location for folks to invest in upstream development, to continue to invest in the modernization of our midstream infrastructure,” said Marcellus Shale Coalition (MSC) President David Spigelmyer, when asked what the Pennsylvania-based organization’s top priorities are for 2018.

U.S. dry natural gas production is expected to be nearly 80 Bcf/d in 2018, or about 6 Bcf/d more than projected 2017 levels, according to the Energy Information Administration’s latest Short-Term Energy Outlook. That growth should be driven largely by growing production in the Marcellus and Utica shales.

Pipeline projects that came online toward the end of 2017, such as Rayne and Leach Xpress, along with Adair Southwest and Access South, tapped into production. Larger projects including Nexus, Atlantic Sunrise, the Mountain Valley Pipeline and Rover Phase 2 should keep producers in Ohio, Pennsylvania and West Virginia busy and production growing as they come online throughout 2018.

In Pennsylvania, which produced 5.1 Tcf of natural gas in 2016 and was on track to finish higher in 2017, trade groups maintain that momentum remains threatened by a series of regulatory and legislative realities and possibilities. Basis discounts and rising associated gas production from places like the Permian Basin also have producers feeling pressured, industry representatives said.

Compared to its neighbors, the stakes would appear to be the highest in the Keystone state, where the gas industry faces new permitting requirements that should take effect early this year and where lawmakers continue to push for a severance tax in an election year.

The Pennsylvania Independent Oil and Gas Association (PIOGA) is primarily concerned with the possibility of implementing a severance tax in addition to the state impact fee, which is levied annually on most unconventional wells or distribution to communities and state agencies. Since the fee was implemented in 2012, producers have paid more than $1 billion, easily surpassing severance tax collections in states that include Arkansas, Colorado, Ohio and West Virginia, Spigelmyer said.

The answer to any severance tax “is simply no. We can’t afford it. We honestly can’t,” said PIOGA Executive Director Dan Weaver. Lawmakers in the state have quarreled for years about implementing a severance tax on gas production to help plug budget deficits. Democratic Gov. Tom Wolf, who is up for reelection this year, has proposed a tax three times since taking office. A four-month budget impasse that ended in October, after much debate and again no tax, didn’t pacify the industry. Representatives believe the debate will pick up again when the legislature reconvenes for the new year.

“No doubt that this will probably be the cornerstone of the governor’s campaign,” Spigelmyer said. “So, we’ll be engaged, and we’re going to be working hard to educate.”

The upstream and midstream sectors in the state are also facing the daunting prospect of permitting changes that could go into effect by the end of March. The Pennsylvania Department of Environmental Protection (DEP) has been working since last year on a new general permit for unconventional well sites and revisions for the general permit for midstream facilities, such as pigging and compressor stations, and processing plants.

The proposals are part of Wolf’s plan to reduce industry emissions and would be among the first in the nation to establish a threshold to control methane emissions at upstream and midstream facilities.

“They took a few steps in the right direction after the comment period and tried to fix some of the more glaring errors within [the proposals], but we didn’t get all the way there,” Weaver said of the new permits. “There’s still some huge concerns about how this affects the ability of our members to operate. I think it raises a lot more questions than it answers.”

One of those concerns, Weaver said, is the current stipulation that operators “spec-out” their equipment, or provide the agency with the serial numbers of certain pieces of equipment, like an engine, for example. If the engine goes down during operations, and it’s replaced with the exact same model, then a new serial number would still have to be provided, Weaver said.

“It’s a brand new piece of equipment, but it’s the same model, and it would have the same emissions,” Weaver said. “It’s going to cause operational delays. They’re asking us to know what every piece of equipment is going to be on location way in advance. We don’t know that far out.”

Spigelmyer added that the permitting proposals prompted what was likely the MSC’s “most comprehensive committee effort ever on commenting on those rules.” He declined to discuss what exactly the MSC would still like to see changed for fear of compromising ongoing negotiations with the DEP. He joined Weaver, however, in adding that his organization is committed to working closely with the agency and complying with the final rules when they’re issued.

Industry representatives added that ongoing delays for existing earth disturbance and well permits in Pennsylvania — which the DEP has in some cases taken more than 100 days to issue — remain a top concern heading into the new year. “We have to do a better job when our neighbors are turning those permits around in a month,” Spigelmyer said. “We need better certainty on the permitting side, and I’m confident the agency is working to improve there.”

Forced pooling legislation has repeatedly failed in the state over the years because of legislators’ concerns about property rights. WVONGA Executive Director Anne Blankenship told NGI’s Shale Daily that her organization would push only for co-tenancy legislation during the 2018 regular session, which begins next week (Jan. 10), and drop the joint development proposal it also pursued in 2017.

Co-tenancy would require a producer to obtain a simple-majority agreement from mineral rights owners to gather landowners into a proposed tract. Joint development would allow unconventional development to occur on land with older leases without having to modify them.

Joint development “is not something that WVONGA is going to pursue because it is just too controversial,” Blankenship said. “It may be something that another company on their own will be working toward, but our goal is to keep anything like that out of a co-tenancy bill.”

WVONGA continues to maintain that producers’ inability to gather leaseholders into large tracts to block up acreage for today’s longer laterals is hurting the state’s competitive advantage. Blankenship said that while she expects a number of energy-related bills to advance during the 2018 legislative session, co-tenancy “is at the top of our list.”

Ohio Oil and Gas Association (OOGA) spokesman Mike Chadsey said things have been quieter in the Buckeye state, with operators settling into a more methodical development pace. He said his organization is primarily focused on three bills that are expected to advance this year.

HB 225 would make it easier for the state to identify and plug orphaned and abandoned wells, while HB 430 would expand the sales tax exemption to cover oil and gas producing equipment. Another piece of legislation supported by OOGA is SB 236, which would create an “affected mine commission” to better guide coal and natural gas producers working near one another.

“I know we’ve certainly had some input on all three of them,” Chadsey said of the bills. “We’ve been out talking with legislators, the Ohio Department of Natural Resources (ODNR), to educate them on the issues and share our perspectives,” he said. “We have to stay in front of these guys, have to remind them that we’re here. These are priority issues for the industry, so we have actively been working on them.”

Beyond that, Chadsey joined others from across the basin in stressing how important downstream opportunities are to both the upstream sector and the region’s economy. Representatives for all the basin’s leading trade groups said they’ll be working more in 2018 to capitalize on growing natural gas production by focusing on attracting petrochemical, power generation and manufacturing opportunities to all three states.

One of the leading opportunities, representatives said, is Mountaineer NGL Storage LLC’s underground natural gas liquids (NGL) storage project in Monroe County, OH. Support has been growing in the private and public sectors for a storage hub in the region to help accommodate more petrochemical facilities like the ethane cracker Shell Chemical Appalachia LLC is constructing in western Pennsylvania.

Mountaineer, which hopes to have four 500,000 bbl NGL storage caverns in service by 4Q2018, has hit permitting snags in Ohio that it’s currently working through.

“It’s challenging for the state of Ohio because ODNR has never issued a permit for an ethane storage hub,” Chadsey said. “We’re admittedly starting from scratch here. We’re writing the book from day one. We can look to other states for best practices, but the real fear is that if we keep delaying this, these guys are just going to pick and move across the river” to West Virginia.

The trade groups also said they have a wary eye trained on the rash of pipeline opposition that’s cropped up across the basin and in nearby states, such as New York. The groups said they plan to keep up the fight at the grassroots level to educate the public, support various projects throughout court proceedings and help their midstream members in any way they can as pipelines continue to face challenges at both the state and federal levels.

“It’s always a possible threat that makes the Appalachian states more burdensome to invest in,” Chadsey said of the environmental opposition. “What we want is a consistent and transparent regulatory structure serving our operators, whether they’re upstream, midstream or downstream. We’re competing with other Appalachian states for investment just like the Gulf Coast is.”