West Virginia’s leading oil and natural gas trade groups have merged in a sign of how the Appalachian Basin has changed in recent years. 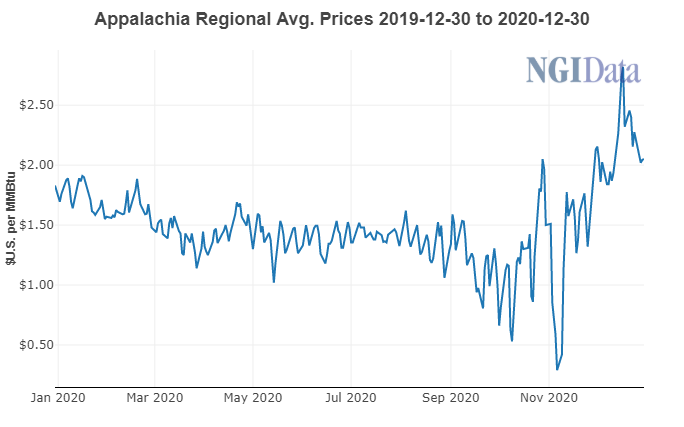 The two groups have taken “virtually identical” positions on legislative, regulatory, environmental and safety issues over the years, Burd said. The new organization will be in a better position to advocate for the industry with one voice, he added. But Burd also acknowledged that the merger is emblematic of the spending cuts, slowing production and consolidation that has characterized the Appalachian industry’s operations in recent years.

“It just seemed to be the appropriate time,” to move ahead with the tie-up, he told NGI’s Shale Daily. There are fewer producers, midstreamers, oilfield services companies and other ancillary businesses working in the basin as mergers and acquisitions, along with bankruptcies, have consolidated operations across Ohio, Pennsylvania and West Virginia.

While IOGA was the larger of the two organizations, WVONGA was older. Formed in 1915, it historically represented pipeline and ancillary companies. IOGA was formed in 1959 and had long represented small, conventional producers. That changed around 2008 as unconventional drilling was on the rise across Appalachia. Both organizations eventually grew to represent every facet of the industry.

But as the double-digit production growth that characterized Appalachia for roughly a decade slowed in recent years, membership — and the fees that come with it — declined and further necessitated the merger. GO-WV will have about 600 members, Burd said.

“A lot of companies, because some of them were smaller, either don’t exist or we were looking at producers buying up other producers,” said Dan Weaver, executive director of the Pennsylvania Independent Oil and Gas Association (PIOGA). “That does affect our bottom line when it comes to membership.”

PIOGA currently has about 375 members, Weaver said, although that number is down by 87 since 2019.

As commodity prices have fallen and shareholders have demanded better returns, Appalachian producers have been forced to cut back. The outlook deteriorated in early 2020 when demand took a significant hit from the Covid-19 pandemic. Another tough year is expected.

“I don’t think there’s any question that until this nation gets a handle on the Covid-19 virus and people can return to what we would call normalcy, it’s going to be more difficult to explore, drill and produce,” Burd said.

Appalachian natural gas production stood at about 33.4 Bcf/d at the start of 2020, but fell by about 1 Bcf/d in March and hovered near 32 Bcf/d before bouncing back above 33 Bcf/d in October, when the forward strip was around $3.00/MMBtu, according to the Energy Information Administration (EIA).

“I think it’s safe to say that Appalachian producers will continue to exercise caution, not just in 2021, but for the next several years,” said NGI’s Patrick Rau, director of strategy and research.

Eight of Appalachia’s main publicly-traded producers are expected to grow natural gas production by 6% year/year in 2021, according to Wall Street consensus estimates cited by Rau. “But you have to peel that figure back a bit,” he said, noting that most of the growth is expected to be driven by Southwestern Energy Co.’s acquisition of Montage Resources Corp. Consensus gas production for the remaining seven companies is expected to grow by just 3% in 2021.

“As a group, the publicly-traded Appalachian producers still have some work to do to get down to their targeted leverage ratios, so the main barometer of their success in 2021 will be by how much they are able to reduce their debt, rather than growth via the drill bit,” Rau said.

Private producers may have other plans, and some have proved more aggressive than their publicly-traded counterparts, yet the drilled but uncompleted well inventory in Appalachia remains at its lowest point since the EIA began tracking such data in late 2013. Moreover, the Appalachian rig count has ranged between 24 and 30 since early May, and only broke over the 40 mark in the final week of 2020, bringing it closer in line with levels seen at year-end 2019.

Appalachian producers must also contend with steep basis differentials. While they’ve narrowed over the last year, Appalachian prices averaged $2.050 on Wednesday, according to NGI data, up from $1.830 at about the same time a year ago, but still below where the Henry Hub prompt contract settled at $2.422.

“I think there is light at the end of the tunnel, but 40 degree days in December headed into January don’t really help natural gas pricing real well,” Weaver told NGI’s Shale Daily on a warmer day ahead of the Christmas holiday. Temperatures moved above 50 degrees in Pittsburgh during the last week of 2020.