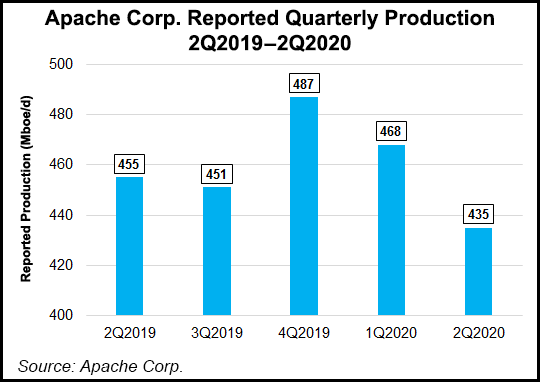 Apache Corp. has no plans to raise rigs again in the Permian Basin “unless oil prices recover well into the $50s,” CEO John Christmann said Thursday.

The Permian, which in recent years had been the Houston independent’s No. 1 prospect, continues to deliver “highly competitive economics,” Christmann said. However, “other areas within our portfolio offer more attractive investment options in a capital-constrained environment,” including Suriname, on the northern coast of South America.

Total global production in 2Q2020 was 435,000 boe/d. Apache chose to curtail 28,000 boe/d across its portfolio. It also shut-in an additional 7,000 boe/d because of unscheduled pipeline downtime at Alpine High.

Overall, Alpine High curtailments and shut-ins averaged 19,000 boe/d during the quarter. Curtailments in other Permian assets peaked at 8,000 boe/d between April and June, with total output averaging 6,000 boe/d.

As prices have rebounded, some curtailed volumes in the North Sea and Alpine High have returned to production, along with a portion of shut-in oil volumes in other Permian plays.

Within the Permian, 20 wells were placed online in April. However, with the pandemic squeezing demand, all drilling activity was eliminated by mid-May. Within the Permian’s gassy Alpine High, 15 wells remain drilled but uncompleted (DUC), with 47 DUCs still to be turned online in other parts of the basin.

“At this time in the Permian Basin, we have no drilling or completions activity and no plans to complete our DUCs for the remainder of the year,” Christmann said.

If West Texas Intermediate oil prices were to remain “at or below $50/bbl, we do not anticipate a material change in our annual capital budget from the current rate of around $1 billion. For oil prices significantly below $50, capital spending is more likely to be reduced from the $1 billion mark.” And if prices rise above $50, “we will be very measured with our capital increases…”

While most Permian activity is shelved until pricing improves, activity in Suriname and Egypt has become more appealing. One exploratory rig is working in Suriname and five are in Egypt. Apache also has a floating rig and a platform rig working in the UK’s North Sea waters.

“We intend to maintain this activity set for the remainder of the year if commodity prices do not deteriorate significantly,” Christmann said. “As we look at the second half of 2020 into the long-term, our key objectives remain unchanged despite the extreme price volatility.”

Suriname, where Apache works with joint venture partner Total SE, “will continue to receive priority funding for both exploration and appraisal activity. Under the terms of our joint venture, the incremental cost to Apache associated with appraisal and ultimately development should be very manageable.”

The second priority is Egypt’s Western Desert, where Apache has worked for about 25 years. At the end of 2019, the company held 5.1 million gross acres in 24 separate concessions, with 70% of the lease undeveloped. Operations are conducted via production sharing contracts (PSC), where Apache bears the risk and costs. In return, if exploration proves successful, Apache is entitled to some of the physical volumes. The PSC structure “offers more stable returns in relatively low and more volatile oil price environments,” Christmann said.