Two conventional drilling companies in Ohio have filed a lawsuit against a Cleveland suburb challenging a charter amendment that bans oil and gas development within city limits in yet another case that finds the industry fighting to preserve centralized regulation in the state. 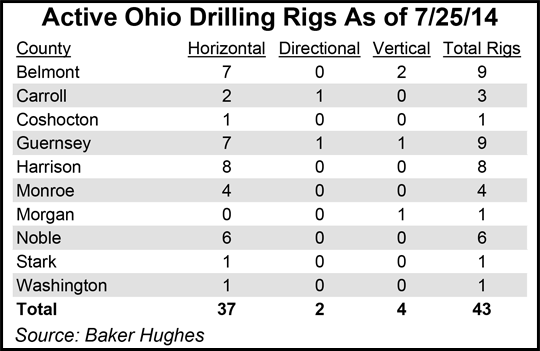 Bass Energy Inc. and Ohio Valley Energy filed a complaint in the Cuyahoga County Common Pleas Court last month seeking declaratory relief to prevent the city of Broadview Heights — about 15 miles south of Cleveland — from interfering with the drilling of a conventional well on 100 acres owned by a local church.

The companies argue that the city does not have authority under state law, which gives the Ohio Department of Natural Resources (ODNR) the “sole and exclusive authority to regulate the permitting, location and spacing of oil and gas wells and production operations within the state.”

In November 2012, voters in Broadview Heights approved a community bill of rights that amended the city’s charter and banned the drilling of new oil and gas wells, as well as the transport and injection of the industry’s waste.

The latest home rule challenge comes as the Ohio Supreme Court is considering a similar case that challenges ODNR’s preemptive authority, which was clarified with the passage of HB 278 in 2004 (see Shale Daily, Oct. 4, 2013). Broadview Heights became one of Ohio’s first cities to ban oil and gas development. The companies’ attorney, John Keller, of Vorys, Sater, Seymour and Pease LLP, said that if the high court upholds ODNR’s authority, Bass Energy’s lawsuit would “pretty well be resolved.”

According to court documents, the company signed a lease with St. Sava church in 2007 and drilled three wells on the property. Ohio Valley Energy is a non-operated partner and both companies have been preparing to drill another well on the church property, with development also slated for land nearby.

The city’s community bill of rights provides for the protection of water, air and sustainable energy, among other things. It bars any new oil and gas extraction and excludes existing wells.

Keller said Broadview Heights did not intervene with plans to drill new wells on the church’s property or take any legal action that prompted the Bass Energy lawsuit. The company obtained a permit to drill the well in question more than a year ago, but Keller said “it became clear” during discussions with city officials that they would take action against development plans at the church.

“So, rather than wait we decided to bring it to a head by challenging the city’s ability to stop drilling,” he said. “Our position, however sincere a city’s intentions, are pretty straightforward. A city cannot override the law that says state officials control the permitting and location of wells.”

City officials could not be reached to comment, but they have reportedly said in the past that it could be difficult to uphold the charter amendment given state law. Broadview Heights, which is located in an area removed from the Utica Shale boom in the state’s eastern counties, is not alone in its efforts to stop oil and gas development. Activists in Youngstown have failed three times to pass a community bill of rights that would have banned drilling within city limits (see Shale Daily, May 7), while Mansfield, Cincinnati, Athens and Bowling Green, have either passed or tried to pass similar laws.

The Ohio Supreme Court case originated in 2011 in Summit County when the northeastern city of Munroe Falls filed a complaint against Beck Energy Corp. The city alleged that after the company had started to drill on private property there, it failed to file for local drilling permits and did not comply with right-of-way ordinances. That case challenges HB 278 and if the justices strike it down it could hand a win to the industry’s opponents, who believe home rule should be restored and localities should be empowered to decide where and how drilling occurs.

Keller, who also represents Beck Energy Corp. in the state Supreme Court case, said the parties continue to await a decision after oral arguments were held in February (see Shale Daily, Dec. 30, 2013). Broadview Heights has yet to file an answer to Bass Energy’s lawsuit.