The Permian Basin’s Delaware play gave a solid assist to Anadarko Petroleum Corp. volumes in the first quarter, but new regulatory scrutiny in its other big onshore play, the Denver-Julesburg Basin in Colorado, weighed on investor sentiment Wednesday. 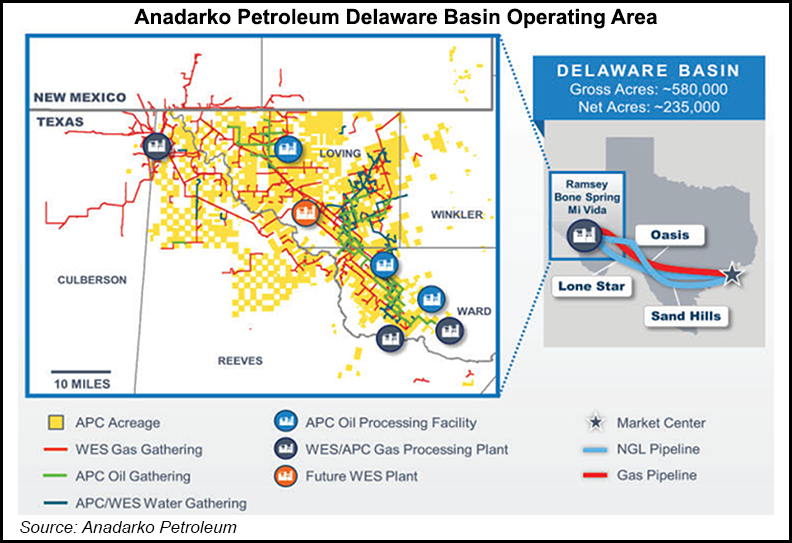 Investor confidence was low after a vertical oil and gas well owned by Anadarko in Weld County, CO, was linked to a fatal home explosion in Firestone last month. State regulators said in preliminary findings Tuesday the explosion was caused by an abandoned and severed unrefined natural gas flowline; they have not assigned blame. In response to the April 17 tragedy, Anadarko shuttered 3,000 vertical oil and gas wells in the DJ, and Great Western Oil & Gas Co. shut in 61 wells.

In response, Gov. John Hickenlooper mandated all operators to inspect/pressure test existing flowlines within 1,000 feet of occupied buildings; ensure pipelines not in use are properly marked/capped; and ensure all abandoned pipelines are cut below the surface and capped.

Before he began discussing the quarterly results Wednesday, CEO Al Walker expressed remorse for the tragedy that claimed the lives of homeowner Mark Joseph Martinez, 42, his brother-in-law, Joseph William Irwin III, also 42, and which critically injured Martinez’s wife, Erin, who remains in the hospital. Her 11-year-old son was treated and released.

“We are saddened by the tragic events in Colorado and our thoughts are with the Martinez and Irwin families during this difficult time,” Walker said. “We are committed to the public trust and safety of the communities where we operate. We will cooperate with the ongoing investigations to fully understand the…preliminary conclusions and will engage all possible resources as final determinations are reached in this matter.”

Walker was asked a few questions about what Anadarko planned to do in the DJ regarding inspections and well shut-ins during the conference call, but he demurred, indicating it was too early to detail efforts.

Turning to results, Walker said it was the first time management was able to provide a “clear picture” of what the U.S. portfolio could do. The latest results overall reflect the “simpler, more streamlined model” he laid out in March, in which he detailed how 80% of global capital spending is now being directed to the “Three Ds,” aka, the deepwater Gulf of Mexico (GOM), DJ and Delaware sub-basin.

“During the first three months of the year, on a divestiture-adjusted basis, we increased oil volumes to an all-time high, growing 26% year/year,” he said. “Our margins improved by more than 100% due to an increased liquids mix and high commodity prices from the prior year. Cash generation was strong, with more than $1 billion in cash from operations. And our financial flexibility and strength were improved by completing divestitures totaling almost $3 billion.”

As Anadarko moves into 2017, cash on the the balance sheet may be used to “maintain or accelerate upstream spending and fund our midstream build-out…to enhance the productivity of our onshore assets.”

Highlighting operations in the Delaware, the CEO said Anadarko is working to capture “as many open operator leases as possible,” with a target for at least 70% operatorship later this year. The producer now has 15 rigs running in the basin, and “we’re planning to transition to pad development in the second half of the year, where we believe we can do this effectively through our established infrastructure in this basin.”

Total volumes from the Delaware averaged 54,000 boe/d in 1Q2017, with oil output averaging 31,000 b/d — representing 9% sequential growth and a 46% increase year/year. For the third consecutive quarter, the average drilled lateral length in the Delaware exceeded 7,100 feet.

To manage growth plans and proactively engage regional stakeholders, Anadarko has opened a regional field office in Midland, TX, to house the Permian development team. At the end of March, about 150 employees had relocated, with another 100-plus set to be in inhouse by this summer.

In the DJ, Anadarko has six rigs in operation, and the company’s Advanced Analytics & Emerging Technology Group, is testing completion designs to maximize the net present value per section.

DJ volumes rose to 242,000 boe/d in the quarter, mostly natural gas-weighted, which, “despite substantially reduced activity in 2016, represents a slight increase” year/year. Oil volumes were 79,000 b/d. In the first three months, the average lateral length in the DJ was more than 7,800 feet. It also set a new company record for long-lateral drilling cycle time, completing a long-lateral well in 5.2 days.

Anadarko also achieved record output from the deepwater, aided by a solid performance from the Caesar/Tonga and new wells at Heidelberg and K2. “This, along with other successes we’re having with our tie-back inventory makes us feel very good about the future in the Gulf of Mexico,” Walker said.

During the first quarter, Anadarko completed previously announced sales of its Marcellus and Eagle Ford shale assets, which combined had an announced value of $3.5 billion.

Expenses were about 53% higher from a year ago, surging to $3.88 billion from $2.54 billion. Exploration expenses, in part attributed to the expensive deepwater, rose more than eight-fold to $1.09 billion. U.S. capital spending in 1Q2017 totaled $836 million, with almost two-thirds ($522 million) directed to the Lower 48; another $282 million was spent in the GOM and $32 million was directed to Alaska. Total capital spending, including international and midstream activities, came in at $1.255 billion in 1Q2017.