The last natural gas well producing at the Independence Hub in the deepwater Gulf of Mexico (GOM) was shuttered in December, less than nine years after the facility ramped up, Anadarko Petroleum Corp. said. 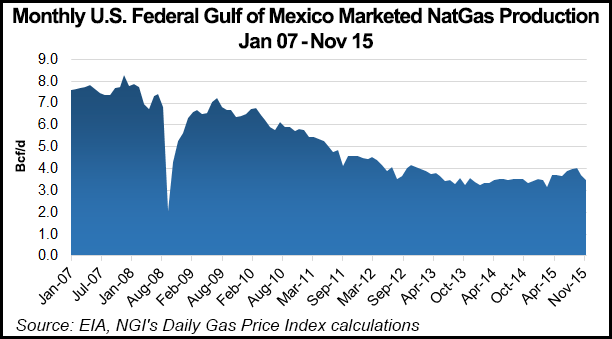 Over eight and a half years, Independence produced 1.3 Tcf gross, which exceeded initial production estimates by 30%, according to Anadarko’s operations report for the fourth quarter. Gross production averaged 37 MMcf/d net during the final three months of 2015.

“The project hit payout within 1.5 years of first production,” management said of the project, whose hub was built to last for 30 years. When it was conceived, operators expected the hub to provide “the single largest increase of gas” from the GOM, with the ability to provide services for up to 1 Bcf/d from 10 anchor fields.

The estimated $2 billion project, about 110 miles from the Mississippi River Delta, was considered a blueprint for future exploration in the U.S. offshore (see Daily GPI, Oct. 23, 2006). It started up in 2007 through the expertise of midstream operator Enterprise Products Partners LP, production contractor Helix Energy Solutions, with contributions from a group of exploration and production companies led by Anadarko (see Daily GPI, Nov. 11, 2004).

The U.S. onshore has taken over heavy lifting for domestic gas supplies, and the deepwater GOM has become a haven for Anadarko and other producers to extract more oil. Last month the producer and its partners ramped up production from the first three wells at the Heidelberg field of the Lower Tertiary Trend, Anadarko’s second major deepwater truss spar development in two years following installation of the Lucius spar (see Daily GPI, Jan. 21).

During the fourth quarter conference call Tuesday, management indicated it would concentrate more on its conventional production in the GOM and overseas at the expense of domestic onshore targets (see Shale Daily, Feb. 2).

Anadarko now is flow testing a sixth well at the Caesar Tonga development in the GOM, which is scheduled to come online by the end of March. A seventh well was near its target at the end of last year, and the second phase of its project is on track to begin first production by the end of 2017.