Anadarko Petroleum Corp., it would appear, followed the advice (in more ways than one) of Ralph Waldo Emerson, who said, “Fractures well cured make us more strong.” Faced with low commodity prices, the super independent turned to better drilling, improving efficiencies and output across the board while lowering costs during the first quarter. 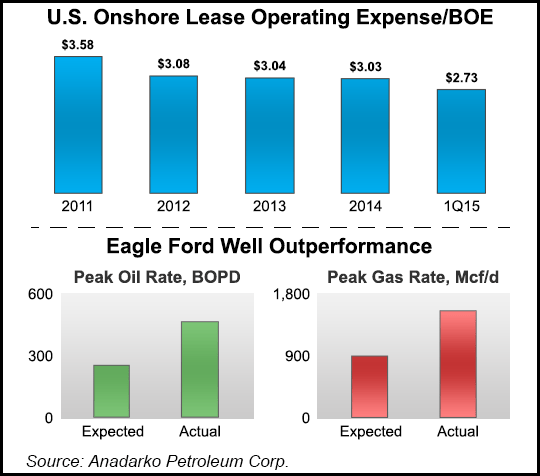 CEO Al Walker shared a microphone with his management team Tuesday to discuss quarterly performance. Profits suffered year/year from a variety of impairments, mostly related to crude oil prices. However, natural gas and oil volumes smashed previous records, while costs are set to glide lower through the year.

The operations teams used a “competitive spirit” to improve performance in adverse conditions, Walker said. For example, costs to drill wells in Colorado’s Wattenberg field declined by 17% from the fourth quarter. Drilling-to-spud times in the Eagle Ford Shale in Texas fell to less than seven days.

“Back in March, we thought we had about $3 billion to spend” for maintenance capital expenses this year, Walker said (see Shale Daily, March 3). In two months, that number has fallen to $2.7-2.9 billion. “We’ve lowered that threshold in this process. Some of that has to do with the fact that we’ve done a great job to date reducing the base decline” with continued improvements now expected going forward.

Anadarko shunned building production in 1Q2015 to instead tweak costs, and “a lot of things have been very positive,” said Walker. “If there’s a benefit of $50-60 oil, it’s focusing on trying to do what you do every day less expensively and better, and improve your efficiency. Our ability to improve our efficiency around our base decline is probably one of the real super positives that came out of the first quarter.”

Based on the stronger-than-anticipated well performance, base production enhancements and reduced downtime achieved to date, full-year 2015 sales volumes guidance were punched higher by 5 million boe to 300-306 million boe from March guidance of 295-301 million boe.

Efficiencies and better deals with the oilfield service operators sent first quarter capital spending toward the low end of guidance to $1.67 billion, leading the company to reduce the upper end of capital expectations for the full year by $100 million. However, even if efficiencies were to improve and commodity prices increase, Anadarko isn’t likely to add to its capital program.

“We have no interest in adding to an oversupplied market that doesn’t give us a good rate of return,” Walker told investors. “I’m not worried about getting back to growth mode” without higher prices. “Most important…we need oil prices not only to be higher but more sustained. We still have some concerns that if we achieve higher prices, we will see an industry increase in activity, then we’ll suffer again…We’re going to be a little careful in adding to our production numbers…”

The U.S. onshore and improvements in drilling and completion techniques proved their mettle, delivering record volumes of nearly 65 million boe. The 59,000 boe/d growth sequentially was 58% weighted to liquids (34,000 b/d), predominately drawn from Wattenberg and Eagle Ford.

Field operators optimized their choke strategy and completion designs to improve well productivity in various basins, with recent Eagle Ford wells demonstrating a 70%-plus increase in peak output rates on completion design enhancements. In addition, a drilling record of $112/foot was achieved in Wattenberg, a 25% improvement year/year. Wattenberg operated well costs in 2015 have decreased on average to less than $3.4 million from last year’s average of $4 million.

In total, Anadarko operated on average 29 rigs in the U.S. onshore between January and March, which is eight fewer (22%) than in the fourth quarter and 23 less (44%) year/year. The company also reduced completion activity to 12 crews from 17 sequentially.

Not to be neglected, Anadarko continued to pursue several deepwater Gulf of Mexico mega projects with its partners, ramping up production from the Lucius spar toward its design capacity of 80,000 boe/d in the first quarter. Progress also continued on the 80,000 boe/d Heidelberg spar, which is more than 85% complete and expected to sail to location by the end of June.

Net losses in the first quarter totaled $3.27 billion (minus $6.45/share) versus a year-ago loss of $2.67 billion (minus $5.30). Excluding one-time items, losses were 72 cents/share. The one-time items included $2 billion in impairments related to prices and unproved properties, as well as $5.15 billion for the settlement related to legacy Tronox Inc. claims (see Daily GPI, April 3, 2014).