Super independent Anadarko Petroleum Corp., which in the past two years has turned its focus to building an arsenal in the onshore and deepwater, plans to pace its upstream spend to manage finicky commodity prices, CEO Al Walker said Tuesday. 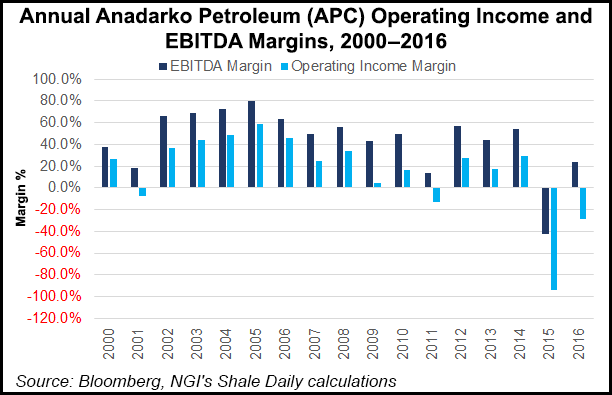 Surrounded by his executive management team during a conference call to discuss second quarter results, Walker again reiterated that overspending, even with $6 billion in cash on hand, does a body no good.

Capital expenditures (capex) for 2017 have been cut by $300 million, which includes a reduction of around $250 million in upstream spend and $50 million for midstream. Combined with asset sales, the lower capex should reduce volumes.

“We sincerely believe the volatility of the current operating environment requires financial discipline, and as I have said many times, pursuing growth without adequate returns is something we will avoid,” Walker said.

“I think as we look into the balance of the year, we’re going to continue to watch the market and see what oil prices do, try to pace our spending this year and next year…That said, we’ll continue to look for opportunities to improve our capital efficiency this year and into next year…”
Anadarko has “fairly durable assets” in both Colorado’s Denver-Julesburg (DJ) and Permian Delaware sub-basin and it remains one of the largest operators in the Gulf of Mexico deepwater.

“I don’t want to leave you with the impression that there’s nothing that we would overlook,” Walker said. “I think we will look at anything. I think we will continue to look for capital efficiency where we can.”

Anadarko keyed its growth to a West Texas Intermediate oil price averaging in the mid-$50s. Oil has been under $50 for a while, but efficiencies are helping the company to manage.

“The current market conditions require lower capital intensity given the volatility of margins realized in this operating environment,” Walker said. “We feel this is a prudent move,” while still expecting to average 130,000 b/d of oil in the deepwater and exiting the year at around 150,000 b/d of oil from the Delaware and DJ basins combined.

“As I’ve said before and still really believe, we’re in the margin business, we’re not in the revenue business,” the CEO said. “So it’s really about how we manage that margin that in turn gives us a rate of return that we believe makes for allocation of capital in an efficient way.

“So today, I don’t know of any indication that would lead me to believe that if prices are a little lower than $55 that we would come off that compounded growth at this point…”
Anadarko still plans to invest around $600 million to expand midstream capacity in the U.S. onshore. It also is in the final stages of securing operatorship on about 70% of the acreage in a former area of mutual interest of the Permian with Royal Dutch Shell plc, which should provide the company with more control over the pace of future development, Walker said. The AMI was completed this month.

“For the remainder of the year, we will continue our evaluation to better understand the incredible potential of our position there while beginning to make the transition from appraisal to development, or said differently, loading the spring for the day when significantly ramping activity is more compelling,” said Walker. “In the meantime, we will continue building out our gas, oil and water infrastructure in the Delaware, having recently secured additional takeaway capacity for both crude oil and residue gas to support future growth.”

The drilled but uncompleted (DUC) backlog is mounting in the Delaware and in the DJ, but the opportunity set should be smaller by year’s end, said operations chief Brad Holly. More fracture (frack) crews should help, along with a rapid acceleration to complete wells in the DJ.

The Delaware still is in appraisal stage and will be for a few more months, with 16 rigs now working the play. In the longer established DJ, the focus is to complete more wells.

“As we ramped up both of these assets, you’ve seen us pick up the drilling side and we’ve recently picked up the frack crews in both areas to address that,” Holly said. “So we did build some DUCs on the frontend, but we expect to work those off in the back-half of the year. For instance, in the DJ, we’ll have 50% more completions in the second half of the year than we had in the first half.”

Overall volumes were down 6% sequentially largely because of Anadarko’s response effort in the DJ. Colorado investigators linked the home explosion to a severed flowline from a legacy Anadarko well sited near home. Anadarko responded by disconnecting all of the 1-inch natural gas flowlines running underground from its vertical wells in northeastern Colorado. Other state producers also were required to test their flowlines.

Asked about the regulatory environment today in Colorado, Walker said most of the likely regulatory impact remains on mapping flowlines and requiring operators to maintain their wells properly.

With billions of cash on hand, the plan is to maintain optionality while building out the midstream and self-funding upstream operations. Management also isn’t averse to considering mergers/acquisitions in the Permian or the DJ, but all deals have to make sense, Walker said.

The producer, headquartered in The Woodlands north of Houston, recorded a net loss of $415 million (minus 76 cents/share) for 2Q2017, versus a year-ago loss of $692 million (minus $1.36). One-time losses included a $234 million after-tax loss on derivatives, $66 million related to asset sales and $11 million for impairments. Operating net cash was $857 million for the quarter.