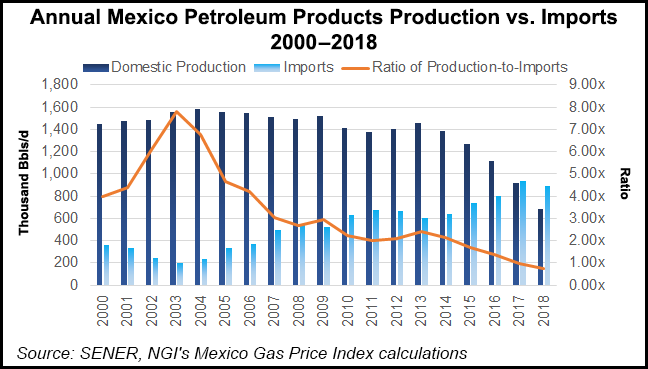 The scourge of “huachicoleo,” a colloquial term for fuel theft, caused a loss of approximately 60 billion pesos ($3.05 billion) for Pemex last year, LÃ³pez Obrador said at his morning press conference, a figure he said will likely be surpassed this year.

“What’s been stolen this year could finance 40% of a refinery,” said LÃ³pez Obrador, whose government plans to build a refinery in Tabasco state at an estimated cost of $8 billion. “In other words, three years of fuel theft is equivalent to a new refinery.”

Attorney general Alejandro Gertz said that the anti-huachicoleo intervention, a coordinated effort between multiple government ministries and branches of the military, began December 20 and has already resulted in the detention of three high-ranking officials at Pemex LogÃ­stica, a subsidiary dedicated to the storage, transport and distribution of fuels throughout the country.

In financial terms, fuel theft is expected to cost Pemex some 66 billion pesos this year, Romero said, more than double the 2016 amount.

The scale of the theft speaks to the “complicity” of Pemex officials, LÃ³pez Obrador said, asserting, “Therefore we are going to combat this theft outside and inside the installations of Pemex.”

Defense secretary Luis Crescencio Sandoval said that the ministries of defense and navy, in coordination with Pemex, identified 58 high-priority Pemex assets where fuel theft has been most prevalent.

These include all six of Pemex’s refineries, 39 storage and distribution terminals, 12 pumping stations, a control center, and 15 distribution networks.

The military has already begun overseeing operations at these sites since December 21, as well as controlling the entrance and exit of all vehicles, Sandoval said.

For the period of December 21-25, fuel theft was down 43% compared to the same period a year ago, Romero said.

Compounding the fuel theft problem is a steady decline in Pemex’s hydrocarbon output.

Natural gas output has been in decline in Mexico since peaking at 6.52 MMcf/d in 2009, largely as a result of falling crude oil production at the country’s flagship Cantarell shallow water oilfield in the Sureste basin.

Crude output in Mexico has plummeted since 2004, when it reached a high of 3.38 million b/d.

LÃ³pez Obrador has pledged an approximately 40% increase in crude oil output by 2024, and a 50% increase in natural gas production in the same period, driven by associated gas.