The FERC order, which followed an investigation that began in May 2006, cited Greenwich, CT-based Amaranth Advisors, seven affiliates and two traders — Brian Hunter and Matthew Donohoe. FERC has given the parties until late September to dispute why they should not be assessed civil penalties and be required to disgorge profits totaling $291 million for allegedly manipulating the price of Commission-jurisdictional transactions by trading in the Nymex natural gas futures contract in February, March and April 2006.

The FERC charges against Amaranth followed the filing of a civil complaint by the Commodity Futures Trading Commission (CFTC) against the hedge fund that also listed Hunter, who directed the fund’s natural gas trading (see Daily GPI, July 26). Amaranth collapsed in September 2006 after losing $6 billion in the gas futures market.

Amaranth was accused of committing 219 violations over a three-month period. The action against Amaranth marked the first prosecution of market manipulation by the Federal Energy Regulatory Commission with its new enforcement authority granted under the Energy Policy Act of 2005, and also was the first time the Commission proposed maximum civil penalties.

In a joint request filed Monday seeking expedited rehearing, Amaranth Advisors and parties challenged FERC’s jurisdiction in the matter. “The Commission’s claim that it has the implicit power to assess civil penalties for transactions conducted entirely beyond its purview cannot be reconciled with its admission that those transactions lie solely within the province of the CFTC,” they said.

“Amaranth Advisors respectfully requests the Commission [act] expeditiously to reassess its jurisdictional ruling to avoid an expensive waste of Commission and taxpayer resources, and the unjustified burden and cost this proceeding is imposing on Amaranth Advisors.”

The argument mirrored those made by former Amaranth trader Hunter in a last-minute court attempt to fend off the charges. A federal judge in Washington, DC, in July denied Hunter’s petition for a temporary restraining order to block the FERC enforcement action. Hunter argued that FERC lacked standing because its regulatory jurisdiction covered only physical natural gas trading, not futures trading (see Daily GPI, Aug. 9). Chairman Joseph Kelliher countered that FERC has jurisdiction because the futures market activities affect the Nymex settlement price, which determines the price of a substantial volume of jurisdictional gas sales, notably in the eastern, midwestern and Gulf Coast markets.

“Of critical importance to this request for rehearing, the [FERC] show cause order alleges that the supposedly manipulative trading took place entirely in the Nymex futures market, a market which the Commission concedes to be subject to the CFTC’s ‘exclusive jurisdiction,'” the Amaranth parties said. “Not one single physical natural gas transaction involving Amaranth Advisors — or anyone else — is even mentioned by the Commission in its show cause order. In fact, Amaranth Advisors never bought or sold physical natural gas in the wholesale natural gas market…Thus, Amaranth Advisors have never engaged in a single natural gas transaction subject to FERC jurisdiction,” they argued.

“The Commission’s jurisdictional theory, therefore, hinges entirely upon the tangential and indirect effect that the price of natural gas futures may have had on the price of unrelated physical natural gas sale by unidentified third parties.”

Separately, former Amaranth trader Donohoe also challenged FERC’s jurisdiction in the matter, and further argued that the Natural Gas Act (NGA) authorizes FERC to pursue manipulation claims only against an “entity,” not an individual. “Section 717c-1 [of the NGA] does not authorize FERC to bring manipulation claims against natural persons and any contrary interpretation by FERC will not stand,” he said. Donohoe cited several cases in which the courts have rejected FERC’s arguments that the term “entity” included natural persons. He called on the Commission to terminate the show case proceeding against him.

Amaranth LLC, also known as “the Fund,” asked FERC to terminate the show cause proceeding against it, saying that the agency’s actions were done “without notice and without providing the Fund any opportunity” to respond to the charges. “Had FERC provided the Fund with such an opportunity, it would have learned that the Fund is nothing more than a client of Amaranth Advisors and did not direct any trading in the natural gas futures markets. Rather, all investment decisions were in the sole discretion of Amaranth Advisors, which the Fund granted complete plenary authority for all trading and manner of investment,” the Amaranth affiliate said.

“As such, even assuming FERC has subject matter jurisdiction over the natural gas futures markets, the Fund cannot fall within the ambit of…the Energy Policy Act of 2005 because it did not make any trading decisions and accordingly could not have intended to affect, or have acted recklessly to affect, a jurisdictional transaction,” it noted.

Affiliate Amaranth International Ltd. (AIL), a Bermuda investment company, also said it had nothing to do with the alleged manipulative activity. “The Commission has cast far too wide a net and swept in a party that does not belong in this proceeding. The decision to name AIL should be reconsidered and reversed now,” it told FERC.

“AIL literally had nothing to do with the conduct at issue in this proceeding. It had no knowledge of any alleged ‘scheme’ to manipulate any market. Nor was it a party or counterparty to any of the transactions; the trades were not conducted on AIL’s behalf…AIL was not a ‘principal’ with respect to any of the transactions in question. Amaranth Advisors is not, and at all relevant times was not, an advisor to, or agent of, AIL,” the affiliate said.

The FERC case against Amaranth involved manipulation of the Nymex settlement price on Feb. 24, March 29 and April 26, 2006, which the hedge fund allegedly accomplished by selling an extraordinary amount of the prompt-month futures contracts during the last 30 minutes of trading before they expired, with the purpose and effect of driving down the settlement price, the agency said.

Investigators in the Commission’s Office of Enforcement found that Amaranth had previously taken positions in various financial derivatives that were several times larger and whose values increased as a direct result of the fall in the Nymex settlement price. Thus, for every dollar lost on its sales of the futures contracts, Amaranth would gain several dollars on its derivative financial positions, FERC noted.

Evidence uncovered by the investigation included instant messages (IM) written by traders. According to one such IM, the scheme began as “a bit of an expiriment [sic]” devised by Hunter on or before Feb. 23, 2006, the day before the first manipulation allegedly occurred. The Feb. 24 “expiriment” was then repeated and refined on March 29 and April 26.

These reported market manipulation violations took place well before Amaranth’s demise in the fall of 2006, when it experienced massive trading losses and ceased trading operations. Amaranth’s collapse was not related to these alleged manipulations, according to FERC.

Based on the facts and circumstances and the absence of any material mitigating factors, the Commission recommended penalties of $200 million for Amaranth, $30 million for Hunter and $2 million for Donohoe. The Commission also proposed that Amaranth disgorge more than $59 million in unjust profits, plus interest. The penalties will go to the U.S. Treasury, while the unjust profits are to go to those harmed by the action, FERC said. 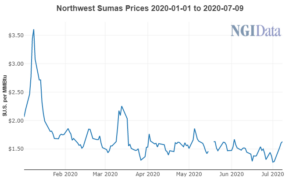 The Covid-19 pandemic played a central role in how state of Washington regulators finalized a $205 million general rate request from Bellevue, WA-based Puget Sound Energy (PSE), and they indicated that will be their practice for as long as the virus is present. New natural gas and electric rates are effective July 20. In the…