Halcon Resources Corp. said it will exercise an option to acquire more than 6,000 net acres in West Texas within the Permian Basin’s Delaware sub-basin and drill at least two wells in the near future, after determining that its first operated well in the play was a success. 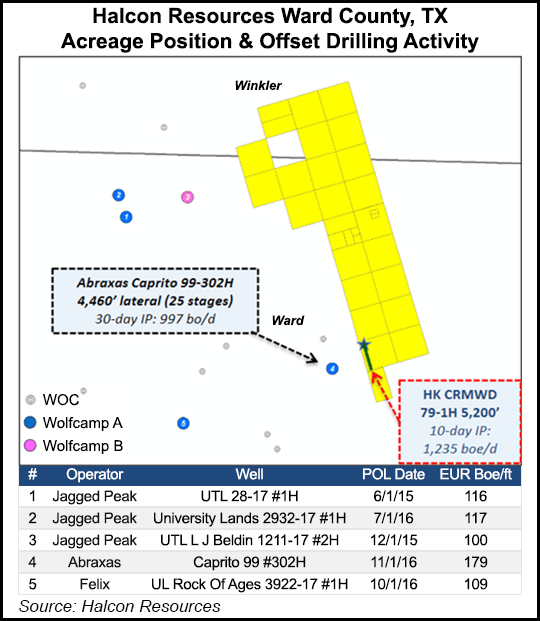 Meanwhile, the Houston-based company said it recently closed on the acquisition of more than 3,000 net acres in the Delaware and is currently looking for more bolt-on opportunities in two Texas counties, as it looks to sell its nonoperated assets in the Williston Basin.

“Both the 10- and 20- day peak rates are continuing to increase as the productivity of the well continues to be very strong,” management said, adding that the well’s latest 24-hour production rate was 1,519 boe/d, 82% oil, with a 28/64-inch choke and wellhead pressure of 2,016 psi.

After adjusting for lateral length, the well, in which it has a 100% working interest, exceeded Halcon’s type curve estimates for its Ward County acreage of about 1.26 million boe for a 10,000-foot lateral.

Halcon said in response to the well’s success, it will acquire by next week (June 15) 6,720 net acres in the southern portion of its Ward County acreage for $11,000/acre. The company plans to spud a vertical well in 3Q2017 on the northern portion of its position in the county, which totals 8,320 net acres, and follow up with a horizontal well “shortly thereafter.” The option to acquire the acreage expires at the end of the year.

Halcon plans to continue to add acreage near its existing positions in both Pecos and Ward counties. The company currently holds about 41,555 net acres in the Delaware sub-basin, with net production of about 4,500 boe/d. Halcon said it would continue to run two rigs on its properties in the basin for the remainder of 2017 and begin completion activities on the first Pecos well in mid-June. One dedicated fracture crew also is to be deployed for the rest of the year.

In the Williston Basin, Halcon expects to sell its nonoperated assets later this summer, provided the company receives an acceptable offer, it said. The company said the properties up for sale — including 15,600 net acres and more than 1,000 gross undeveloped locations — had 2,350 boe/d of production, 91% weighted to oil.

Halcon would use proceeds from a Williston sale and debt to fund the option acquisition in Ward County and future acquisitions in Pecos County.

Last January, Halcon acquired 20,748 net acres in Pecos and Reeves County, TX, from an undisclosed seller for $705 million. The company also agreed to sell its Eagle Ford Shale assets in East Texas, known as the El Halcon, for $500 million.