Business leaders, analysts and politicians have joined a chorus of warnings that shortages of natural gas could strangle the ambitions of the Mexican administration to boost economic growth and create greater opportunities for the nation’s poor. 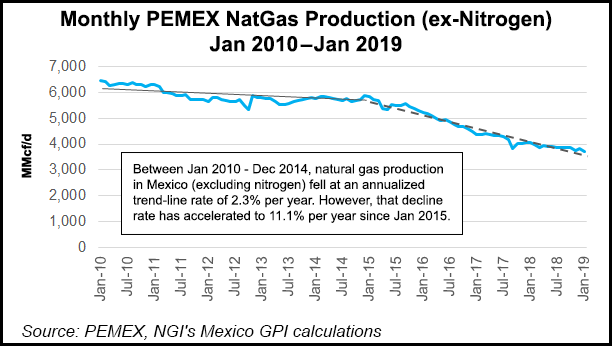 Community protests have delayed the conclusion of seven pipelines to bring gas from the United States. Moreover, national oil company PetrÃ³leos Mexicanos (Pemex) hasn’t been able to stem its long-standing decline in the output of gas, and Pemex remains almost Mexico’s sole gas producer. The combination of these factors has led to the threat of gas shortages to industry.

“The biggest problems that are facing industrial users right now are in central and west-central Mexico,” said RamsÃ©s Pech, a partner of the Tabasco-based consultancy Caraiva y Asociados. “These are the areas that are more dependent on imports while Pemex is putting its budget and its efforts into increasing oil output.”

Mexican employers’ association ConfederaciÃ³n Patronal de la RepÃºblica Mexicana (Coparmex) said that its members received warnings from Pemex some months ago that supplies of natural gas would be restricted from time to time for reasons of force majeure.

Consejo Coordinador Empresarial (CCE) president Juan Pablo CastaÃ±Ã³n told newspaper El Financiero that while the business group’s members expected gas rationing from Pemex in early 2019, “we are feeling it with a bit more intensity than we expected.”

“Our members fear that their gas supplies will be cut by about 20%,” he told reporters at a recent event.