Following through on a Trump administration pledge to spur energy development in Alaska, Department of Interior (DOI) Secretary Ryan Zinke signed a secretarial order (SO) that includes provisions to jump-start oil and gas production in the National Petroleum Reserve in Alaska (NPR-A). 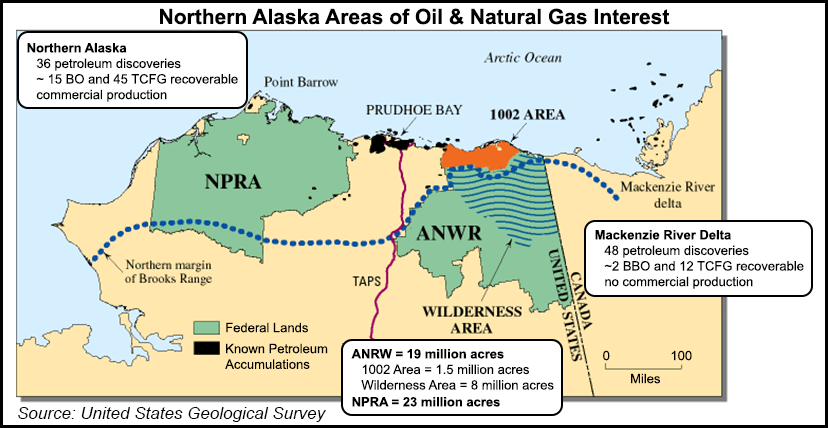 Zinke also reportedly said that DOI will soon begin the process of rewriting the 2017-2022 Outer Continental Shelf (OCS) leasing plan, and that oil and gas companies would be allowed to conduct seismic surveys along the coastal plain of the Arctic National Wildlife Refuge (ANWR).

Under the SO, which was signed on Wednesday, DOI staff will have three weeks to review and develop a revised plan for oil and gas activities in the NPR-A, with the stipulation that the plan “strikes an appropriate statutory balance of promoting development while protecting surface owners.” It also calls for an evaluation into ways to maximize the tracts offered at the next NPR-A lease sale.

DOI staff will also have three weeks to develop a joint plan for updating current assessments of undiscovered, technically recoverable oil and gas resources along Alaska’s North Slope. The assessment will focus on federal lands, including the NPR-A and the 1.5-million acre coastal plain of the ANWR, a region also known as the 1002 Area.

The SO requires both plans to be submitted to Zinke within 31 days. The latter plan also effectively scuttles a recommendation by the Obama administration in 2015 to designate about 12.3 million acres of the ANWR, including the coastal plain, as wilderness, banning oil and gas drilling there.

“The NPR-A serves a critical role in both our energy and national security,” Zinke said Wednesday. “This is land that was set up with the sole intention of oil and gas production, however years of politics over policy put roughly half of the NPR-A off-limits…

“DOI will identify areas in the NPR-A where responsible energy development makes the most sense and devise a plan to extract resources. We will do it in a way that both respects the environment and traditional uses of the land as well as maintains subsistence hunting and fishing access.”

According to a report by E&E News, Zinke told attendees at an Alaska Oil and Gas Association (AOGA) conference in Anchorage that DOI would begin the rewrite of the 2017-2022 OCS leasing plan within days. An executive order signed by President Trump in late April directs the DOI’s Bureau of Ocean Energy Management to rewrite the leasing plan and reconsider several regulations governing offshore activities.

After the AOGA conference, Zinke reportedly said he doesn’t “expect the U.S. government and the state to do all the seismic evaluation; I want to invite [the oil and gas] industry to take a look at it, too.”

“This SO is exactly the type of announcement that so many Alaskans have been asking for: a smart, timely step to restore access to our lands, throughput to our Trans-Alaska Pipeline, and growth to our economy under reasonable regulations that do not sacrifice environmental protections,” said Sen. Lisa Murkowski, who chairs the Senate Committee on Energy and Natural Resources.

Sen. Dan Sullivan said that under the SO, the Trump administration “will allow the country to finally deliver on the promised energy security and abundance we had in mind when Congress set these lands aside for future exploration and development.” Rep. Don Young added that the White House “understands the importance of responsible resource development in Alaska and the Arctic and is focused on addressing the many bureaucratic roadblocks that have stood in our way for far too long.”

Environmental groups were outraged. In a statement, Nicole Whittington-Evans, a spokesperson for The Wilderness Society, said DOI’s moves would impact Native American tribes in the region, including the Gwich’in community on the southern edge of the ANWR.

“The survival of the Gwich’in Nation is at stake,” said Whittington-Evans. “We need to continue to protect and preserve the ANWR, which has values far beyond whatever oil might lie beneath it. Some places are so special that they should simply be off limits, and the ANWR really is…too wild to drill.”

But not all Native Americans were opposed to the plans. After meeting with Zinke, North Slope Borough Mayor Harry Brower Jr. — an Inupiat whaling captain whose borough includes both the NPR-A and the ANWR — said his constituents “recognize the importance of oil and gas to our local economy and the ability of our borough and city governments to provide public services.

“We look forward to working with [Zinke] to continue to permit responsible development on the North Slope while, at the same time, protecting our wildlife and our subsistence way of life.”

According to the U.S. Geological Survey (USGS), the portions of the 1002 Area controlled by the federal government hold an estimated 7.7 billion bbl of technically recoverable oil. The USGS estimate climbs to 10.4 billion bbl with the inclusion of Native lands and adjacent state-controlled water areas within a three-mile offshore boundary.

The State of Alaska first announced plans to assess oil and gas resources within the 1002 Area in 2013, but the plans were rejected by the U.S. Fish and Wildlife Service (FWS). Alaska subsequently sued the FWS in 2014, arguing that it is authorized to explore the region under the Alaska National Interest Lands Conservation Act. A federal court disagreed and blocked the state from conducting 3-D seismic exploration and drilling of the area in July 2015.