Continued power outages in Mexico’s Yucatan Peninsula have exacerbated worries about the supply of natural gas to the region amid declining production and delays to crucial infrastructure projects. 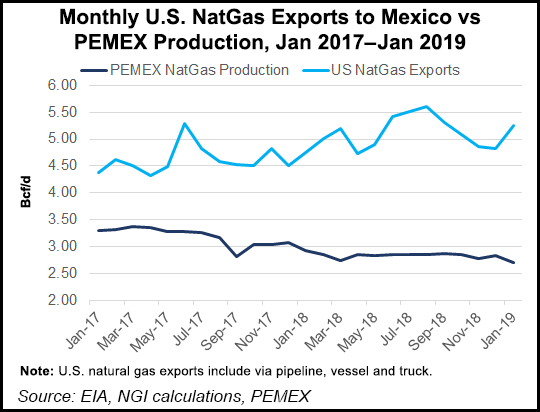 The peninsula suffered its third major power outage of the year on Monday, according to reports. Local energy experts and officials have been warning of the peninsula’s vulnerability to continued blackouts as summer approaches because of insufficient transmission infrastructure and the scarcity of natural gas in the region to generate power.

The outlook for gas supply to the peninsula appears unlikely to improve over the coming months, according to Nera Economic Consulting’s Veronica Irastorza, associate director.

In the meantime, “I don’t foresee any relevant change that will permit the arrival of more gas to the peninsula,” Irastorza told NGI’s Mexico GPI.

The peninsula “depends completely” on Petroleos Mexicanos (Pemex) production from the gas processing centers Cactus and Nuevo Pemex, “which has fallen by around 40% over the last 10 years.”

Users in the two states lost power for 11 minutes and 18 minutes, respectively, CFE said, adding that CFE and Cenace were investigating the causes.

CFE attributed the region’s previous two blackouts, which occurred on April 4 and March 8, to fires caused by the burning of sugarcane near transmission lines that supply power to the peninsula. The April 4 blackout affected about 1.6 million clients while the March 8 blackout, which lasted nearly an hour, affected 350,000, according to CFE.

Since the peninsula is not yet connected to the Sistrangas national pipeline network, it depends entirely on wet gas produced and processed in southeastern Mexico by Pemex.

During a press conference earlier this month, CFE general director Manuel Bartlett said the 100% state-owned company plans to invest 2 billion pesos (US$106 million) in additional transmission infrastructure to shore up power supply to the peninsula.

The works are expected to enter operation within two years and benefit about 1.9 million clients, Bartlett said.