Crews were still working Tuesday on a plan to cap a Utica Shale well that XTO Energy Inc. and its contractors lost control of last Thursday in Ohio’s Belmont County. 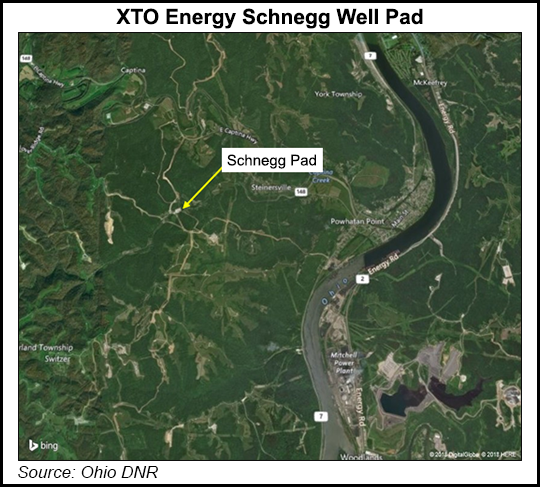 XTO spokesperson Karen Matusic said the company has been working since the incident to clear debris from the pad, and there is no timeline on when the well may be capped. She said it could take time to remove a large crane that was still on site. Texas-based Cudd Well Control was working to develop a plan to kill the well.

About 24 people were working at the Schnegg pad in York Township early Thursday when contractors lost control of the well as they were pulling plugs and finishing up completion operations, Matusic said. The well exploded and caught fire. It’s unclear what caused the incident, in which no one was hurt.

The well as of midday Tuesday was spewing gas and brine water. Local authorities estimated that about 100 people living within one mile of the well were evacuated after the incident. The evacuation zone had been reduced to a half-mile radius on Monday, but residents living in five homes were still waiting to return.

Three other producing wells on the affected pad were shut-in during the completion operations, but Matusic said it was too early to determine if they also were damaged.

ODNR spokesman Steve Irwin said XTO is working with state agencies to conduct air quality tests. Booms have also been placed in a nearby creek to collect runoff from the pad. Irwin added that crews are also working to restore power in the area after heavy rains caused flooding over the weekend.

The ExxonMobil Corp. subsidiary has more than 82,000 acres scattered across the Utica Shale strongholds of Monroe and Belmont counties. Operators have received more than 550 horizontal permits to drill in Belmont County alone, or about 20% of all the Utica permits issued in the state, according to ODNR records.