Adding a dash of new natural gas-fired generation to a mixing bowl filled mostly with renewable resources, Denver-based Xcel Energy Inc. on Wednesday submitted its energy plan to Colorado regulators, proposing 11 generation sources and a $2.5 billion outlay to cut carbon emissions by 60% in 2026. 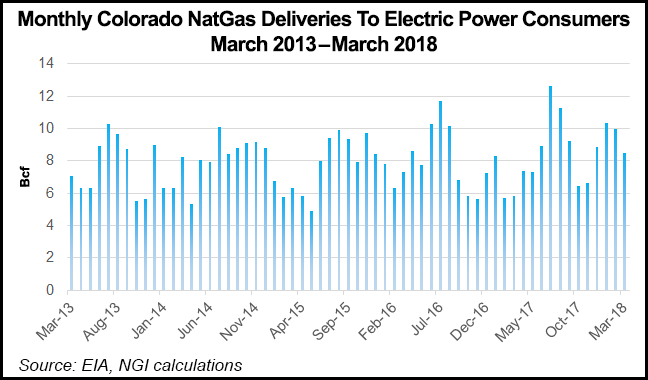 The utility plan is the outgrowth of what its executives called the “vision” of a broad coalition of stakeholders that supported an energy plan filed with the Colorado Public Utilities Commission (CPUC) in August 2017.

The plan calls for more than 1,700 MW, including 380 MW of natural gas-fired generation, nearly 1,100 MW of wind generation and 275 MW of large-scale battery storage, split between two existing power sites, while two coal-fired power plants in Pueblo would be shuddered.

“The plan would retire one-third of Xcel’s remaining coal-fired generation in the state,” said a Denver-based spokesperson.

“Last year, we introduced the Colorado Energy Plan to pursue a transformative step in response to our customers’ and communities’ requests for cleaner energy,” said Alice Jackson, president of the company’s Colorado operations.

The additional gas generation would include a small Boulder plant and another northeast of Denver in the Denver-Julesburg Basin. Renewable projects include four wind farms, two solar photovoltaic plants and three solar/storage projects.

In Pueblo, where coal-fired units are slated to be closed, Xcel has proposed locating some of the new renewables in and around the city.

“We are committed to making the transition to cleaner energy work for all stakeholders and look forward to building on Pueblo’s strong energy leadership,” Jackson said.