Wyoming Gov. Matt Mead and the Wyoming Pipeline Authority (WPA) have called on FERC to reject Trailblazer Pipeline Co. LLC’s proposed revisions to its natural gas quality standards, saying they would be not only harmful to the state but the rest of the nation as well. 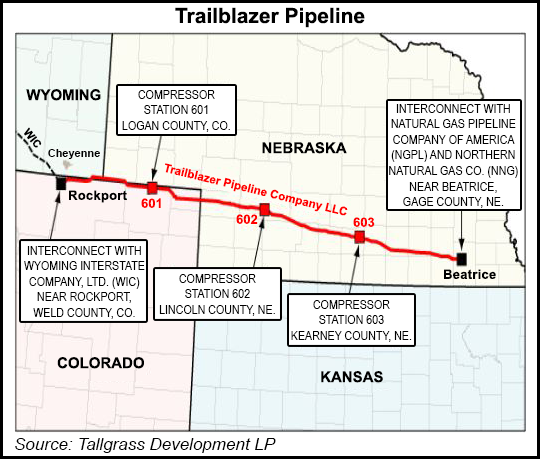 “I urge the Commission to reject Trailblazer’s proposed limitations on total inert gases and on cricondentherm hydrocarbon dewpoint [CHDP],” Mead wrote in a letter last Friday to outgoing Federal Energy Regulatory Commission (FERC) Chairman Jon Wellinghoff [RP13-1031]. The CHDP is the temperature at which any hydrocarbon-rich gas mixture, such as natural gas, will start to condense out of the gaseous phase. An inert is a gas that does not undergo chemical reactions under a set of given conditions.

The Commission addresses these and other gas quality specifications on a pipeline-by-pipeline basis.

The Wyoming Pipeline Authority (WPA), which was established to promote and defend the country’s access to natural gas produced in Wyoming, warned that Trailblazer’s proposed revisions to its gas quality specifications could result in more of the Powder River Basin gas flowing out of the Rockies on pipelines other than Trailblazer.

In asking FERC to reject Trailblazer’s request to the proposed revised gas quality specification, the WPA said the pipeline “has not satisfied the threshold criteria applied by the Commission for approving revisions to pipeline gas quality specifications. Thus, Trailblazer has failed to demonstrate either that there is a need to adopt a total inerts standard in order to address a current operational problem on the system, or that the proposal is justified to avoid creating operational problems in the future.”