Facing a $1 billion budget deficit in part linked to a decline in revenue from the energy sector, Wyoming Gov. Mark Gordon has ordered a 10% budget cut across the board. 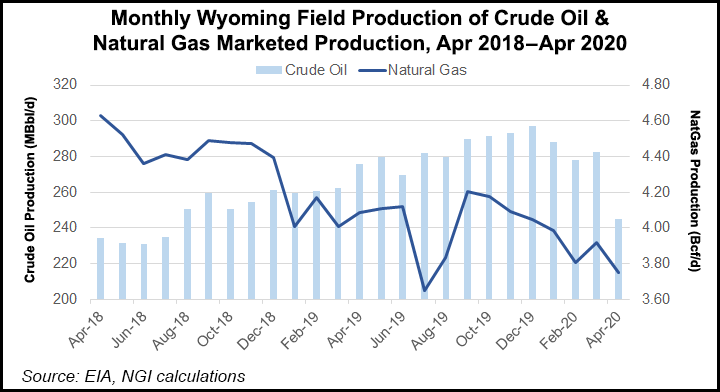 Given the budget challenges from the coronavirus and the economic slowdown, “the quicker we act, the greater ability the state will have to minimize the impact on people,” Gordon said. He has slashed $250 million from the statewide budget with another $500 million reduced for schools.

Gordon called the budget cuts a first step, noting that there is still a $600 million deficit. State agencies were directed to prepare preliminary proposals to cut an additional 10%. Gordon spokesperson Michael Pearlman told NGI’s Shale Daily that coal revenue was down 25% and oil revenues had dropped more than 50% in the past three months.

Based on the percentage of taxes supported by oil and gas, Petroleum Association of Wyoming President Pete Obermueller claimed the reduction in oil and gas activity was the primary driver of the budget shortfall.

“I don’t have exact numbers, but the state projects that severance tax revenues will decline by 44% and ad valorem by an additional 20% over the next two years,” Obermueller told NGI’s Shale Daily. “Given that oil and gas pays more than 40% of ad valorem and more than 65% of severance, the reduction in oil and gas is the primary driver.”

Data on idle wells has been significantly delayed, Obermueller noted. Nevertheless, Wyoming has not had quite the impact of shut-ins as expected.

“On the oil side, we went from 12,949 idle wells in March to 13,839 in April; lots of data is still missing from those, and there is too much data missing to even report on May numbers.”

Wyoming Oil and Gas Conservation Commission’s Mark Watson, the oil and gas supervisor, said the budget cuts won’t affect the commission, and operations should remain unchanged. In addition, he said “more wells are being returned to production with the increasing oil prices.”