With a goal of more precise exploration and production (E&P) in the Powder River Basin (PRB), University of Wyoming (UW) researchers and industry this month moved into the second phase of cooperative research on the basin’s geology. 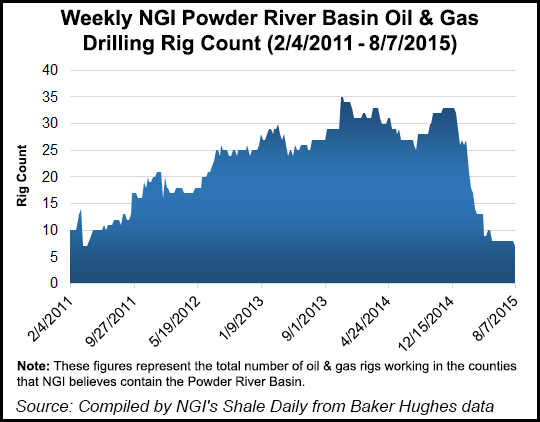 The focus is on the Frontier formation, where hydraulic fracturing (fracking) has revitalized E&P activity (see Shale Daily, Sept. 15, 2014).

New Orleans-based service company Helis Oil & Gas Co. and Oklahoma City-based Devon Energy Corp. are working with researchers at UW’s Department of Geology and Geophysics and the School of Energy Resources. The Cretaceous Tight Oil Consortium is seeking the best ways to tap unconventional oil reservoirs. PRB, one of the busiest oilfields, helped spark the first phase of the research in 2012.

Initial UW research focused on the stratigraphy of tight sandstone of the Frontier. Graduate student Rebekah Rhodes used core and outcrop analysis to provide “a clearer picture of the subsurface,” according to UW. The analysis is expected to help E&Ps “better model and more efficiently extract oil from deep reservoirs.”

In this second phase, researchers plan to analyze the interaction of hydraulic fracturing (fracking) fluids with the minerals of the formation.

“We’re looking at how the fluids react with the Frontier,” said UW’s associate professor John Kaszuba. “’This should provide companies with information about what treatments to use downhole to maximize production.”

Using core samples from the Frontier and the fracking chemicals used, researchers during the next two years plan to duplicate underground temperature and pressure levels in the laboratory to analyze the geochemical reactions to gain insights into which chemicals to use or avoid in frack jobs.

In some cases certain chemicals could create reactions that reduce oil/gas flows prematurely, said Kaszuba, noting that “if minerals behave badly, they can plug wells” and steep production declines could be mineral-related.

The combination of the earlier stratigraphic data with the geochemical research “could substantially improve well completions in the Frontier and other similar reservoirs,” said assistant professor and co-leader of the research Brandon McElroy.

“The PRB increase in oil production is largely attributable to production growth in the Turner, Parkman, and Niobrara-Codell formations, which collectively increased from 4,700 b/d in 2009 to 36,300 b/d in 1Q2014, increasing their share of total PRB oil production from 12% to 46%,” EIA stated in a report last September.

More energy production, more state revenue, more university support and an “increased general understanding of Wyoming geology” are all possible outcomes from this project, according to Erin Campbell-Stone, senior lecturer in the geology/geophysics department.