WPX Energy Inc. is swapping the rest of its neglected coalbed methane (CBM) property in the Powder River Basin (PRB) for a bigger slice of oily property in the San Juan Basin. 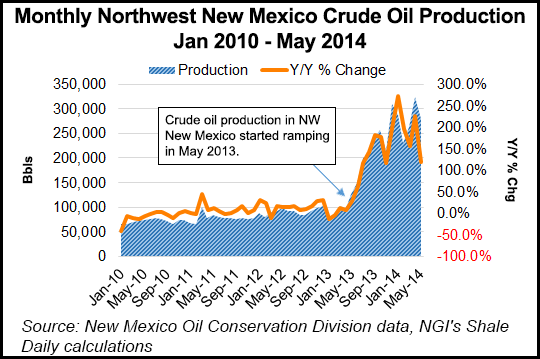 The Tulsa-based producer, which has been reducing its natural gas exposure to improve its margins, said on Monday the San Juan purchase would bolster its oil acreage in the basin by more than half.

Through “multiple transactions,” WPX now controls 74,000 net acres in San Juan Basin’s Gallup oil window, he said. The latest transactions give it another 26,000 acres in the Gallup acreage alone, including 800 boe/d. Most is held by production.

With the acquisition, WPX has an estimated 425 gross drillable locations for oil in the area, assuming 160-acre spacing. A third rig is being added this year, with possibly a fourth in 2015, Muncrief said.

Production in the Gallup play in 2Q2014 jumped 500% from a year ago. Sequentially, oil volumes in the play rose 76%. Well costs at the end of June were around $5.2 million/well.

The legacy PRB assets are being sold for $155 million to an undisclosed buyer. The agreement also releases WPX from firm transportation with $30 million in future demand obligations.

Last year, the PRB portfolio represented about 15% of WPX’s total output, but it generated only 5% of adjusted earnings, minus the unused transportation.

The dual transactions are a positive for WPX, according to Tudor, Pickering, Holt & Co. The CBM assets “finally exit the portfolio, netting $155 million plus relief of a $30 million firm transport contract.”

The price WPX fetched for the PRB portfolio for was “nothing to brag about,” which analysts estimated was for around $1,200/Mcfe per day, but WPX “should be rewarded” given its gassy operating expenses, which they estimated at about $2.00/Mcf.

The decision to add one and possibly two rigs to the San Juan Basin was “faster than we anticipated,” said analysts. Assuming the acreage is being purchased using the CBM proceeds, the scale/escalation could generate $1.00/share or so in proved, possible and probable net asset value.