To ensure its financial viability in uncertain times, WPX Energy Inc. is dropping rigs and crews in the Permian and Williston basins, as well as building a backlog of uncompleted wells to hold the line on costs until energy demand is higher. 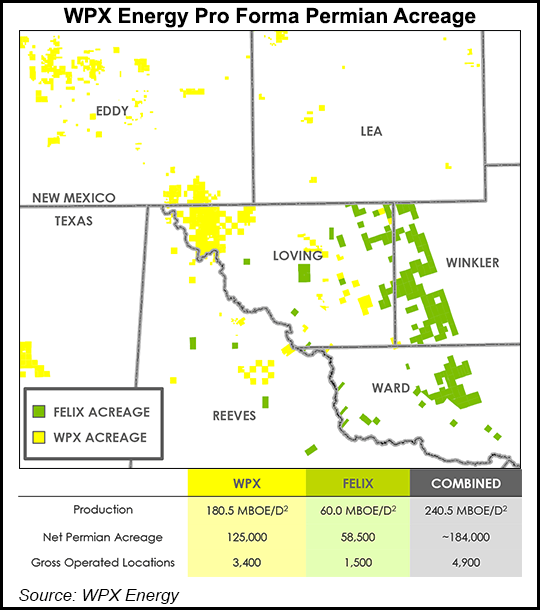 The Tulsa-based independent was producing more than 150,000 b/d net in oil at the end of March, boosted by the 60,000 it acquired in the recent takeover of Permian operator Felix Energy Inc. Since then, however, output has been curtailed, with plans to shut-in 30,000 b/d net in May, or about 45,000 b/d less in the market on a gross basis.

Similar curtailments are possible in June.

“In these unprecedented times, we’re acutely focused on keeping our employees healthy, protecting our cash flow and preserving our assets for future value creation,” said CEO Rick Muncrief. “Our financial position is solid as evidenced by banks and lenders who recently reaffirmed our credit facility, along with the ratings agencies who reaffirmed our credit ratings in the last few weeks…

“Nothing is easy right now, but rebalancing supply with demand will take place over the remainder of the year.”

In the Delaware, first quarter output averaged 117,500 boe/d, up 28% year/year. Twenty-five Delaware wells were completed in the quarter from legacy holdings, with no completions in the Felix assets.

Williston production averaged 79,500 boe/d, 26% higher than in 1Q2019. Seventeen wells were completed in the Williston, with 11 in the Three Forks and six in the Bakken Shale.

WPX in March reduced its 2020 capital spending plan by $400 million. It has since developed scenarios to slash another $150 million, which brings expenditures down by around 40% from 2019.

Fifteen rigs were in operation during the first quarter, but plans are to have only six running by year’s end, with five in the Delaware and one in the Williston. The four completion crews also have been released. Second quarter sales “will be limited to a few wells” completed before the crews were released.

Plans are to build an inventory by year’s end to have three-to-six months of drilled but uncompleted wells, aka DUCs.