After a brutal slashing, natural gas bulls licked their wounds and managed to churn out a respectable rebound along the natural gas futures curve to close out the week. The August Nymex futures contract settled Friday at $5.730/MMBtu, up 30.6 cents on the day. September futures climbed 32.0 cents to $5.712. 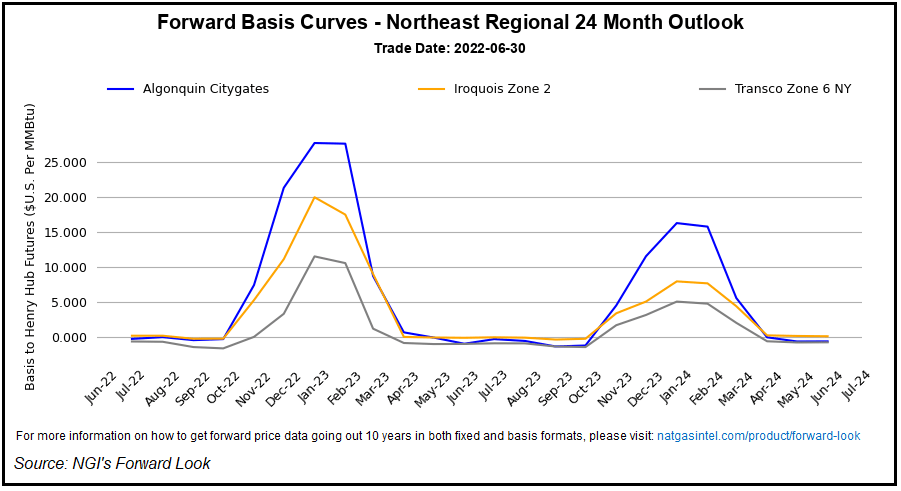 The fireworks show in futures trading was bright throughout Friday’s session, with the August contract coming within a nickel of the $6.00 mark early before bears trimmed some of those gains.

“We are now $4 off the highs, all thanks to what has happened at Freeport,” Bespoke Weather Services said.

That’s not to say bulls have nothing working for them.

To be sure, the first half of July is forecast to be a scorcher. NatGasWeather said the overnight data was hotter trending July 5-15, while the midday Global Forecast System (GFS) model trended even hotter July 5-8. In the latest run, the GFS showed an “impressively strong” upper dome of high pressure over most of the interior United States. It was cooler across the Northeast July 10-13 to give back a few cooling degree days, but on a national level, they should still average normal, according to the forecaster. That said, odds are the GFS trended a little too hot in recent runs and has the potential to give a few CDDs back.

With recent storage data indicating notably looser balances in the wake of the Freeport outage, “bulls need widespread heat to hold as long as possible to offset what’s proving to be notably greater supply,” NatGasWeather said.

Should We Still Worry About Supply?

The Energy Information Administration (EIA) said inventories for the week ending June 24 grew by a larger-than-expected 82 Bcf. This was the second storage report in a row in which the data surprised to the high side.

“Freeport is kicking back around 2 Bcf/d seven days a week,” Mizuho Securities USA LLC’s Robert Yawger, director of Energy Futures, told NGI. “Storage is closing the big deficit that had rallied natural gas futures to a 14-year high of $9.664 on June 8, the day that Freeport blew up.”

Meanwhile, the LNG export terminal’s return is being called into question after the Pipeline and Hazardous Materials Safety Administration (PHMSA) issued a proposed safety order in light of its preliminary findings into the cause of the explosion. Freeport said in mid-June it was aiming to return to partial service in three months and expected full service to resume by the end of the year.

“With the new timeline for when Freeport becomes operational extending into October, if not longer, weather patterns will eventually become less favorable since they can’t hold this much heat forever,” NatGasWeather said. “And when that happens, deficits are likely to improve.”

Until then, the market may have sold off too much too quickly, according to Bespoke. The last two EIA figures have been “solidly bearish,” enough so that if balances do not tighten back up soon, the market could easily still slide lower.

However, with the combination of lower prices, which should help power burns, and a weather pattern that still has some solid heat in it, now seems too soon for the market to have enough comfort to head much lower, according to Bespoke. If the market gets through the next few weeks with no retightening, and heat does not materialize as much, then it could see the market being more comfortable with the supply picture.

“As discussed previously, however, there have just been too many land mines in this market lately to have much confidence either way, especially heading into a long holiday weekend,” Bespoke said.

Spot gas prices continued to soften ahead of the holiday weekend, even with some pipeline maintenance restricting gas flows.

Despite the pipeline work, gas prices cratered across the Lower 48.