The World Bank raised its forecast for 2017 crude oil prices from $53/bbl to $55/bbl Thursday, citing a potential production limits agreed to by the Organization of the Petroleum Exporting Countries (OPEC). 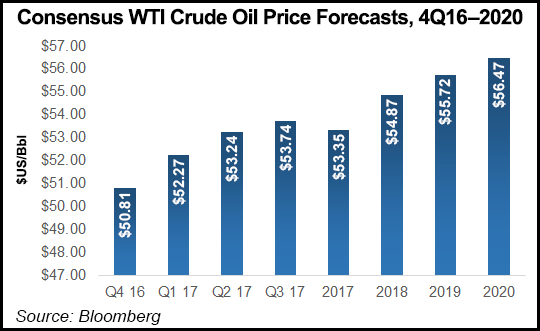 According to the World Bank’s quarterly Commodity Markets Outlook report, energy prices overall — including oil, natural gas and coal — are now expected to increase 25% in 2017, a bigger jump than what the bank had previously projected in July.

“We expect a solid rise in energy prices, led by oil, next year,” World Bank Senior Economist John Baffes said. “However, there is considerable uncertainty around the outlook as we await the details and the implementation of the OPEC agreement, which, if carried through, will undoubtedly impact oil markets.”

The 14-nation OPEC, which produces more than one-third of global crude oil output, reached a tentative agreement in late September to reduce output for the first time in eight years — to 32.5 million b/d from an August level of 33.24 million b/d (see Shale Daily, Sept. 28).

The World Bank said Thursday that “OPEC’s ability to affect oil prices is likely to be tested by the expansion of oil supply from unconventional sources, including shale producers.”

Oil prices are still expected to average $43/bbl for 2016, unchanged from the previous outlook report.

“The World Bank’s increased 2017 price forecast to $55/bbl is just a $2 increase from its previous estimate, but it’s significant in that it increases the buffer over the $50/bbl mark by 67%, from $3 to $5,” Patrick Rau, NGI’s director of strategy and research, said. “$50 seems to be the magic level for many U.S. producers to ramp up activity, a sentiment that Halliburton echoed on its 3Q16 earnings conference call on Wednesday.”

Meanwhile, the International Energy Agency said earlier this month that crude prices in the neighborhood of $60/bbl would trigger a big increase in U.S. drilling activity (see Shale Daily, Oct. 11).

The future of crude prices figures to be a major determining in factor in what happens to natural gas prices headed into 2017. In an LDC Gas Forum presentation in Chicago last month, Macquarie Capital’s Vikas Dwivedi said $50/bbl marks the point at which associated gas from oil-directed rigs in the U.S. onshore “will start going back into growth mode” (see Shale Daily, Sept. 16).

“More oil drilling, particularly in the Permian Basin, should lead to an increase in associated gas production,” Rau noted. “But strong oil prices also should enable producers to continue to strengthen their balance sheets, and sustained higher oil prices would give them more of an ability to outspend their cash flows. Some of that extra spend could be dedicated to gas drilling.”

Earlier this month, the Energy Information Administration said it expects Henry Hub to average $3.07/MMBtu in 2017, substantially higher than its previous 2017 price forecast.