Spot gas prices tumbled through the Aug. 1-5 trading week as stronger production figures countered sweltering heat across most of the country. With thunderstorms rolling through the Midwest, and cooler weather expected in some regions by the weekend, NGI’s Weekly Spot Gas National Avg. fell 63.5 cents to $8.020/MMBtu. 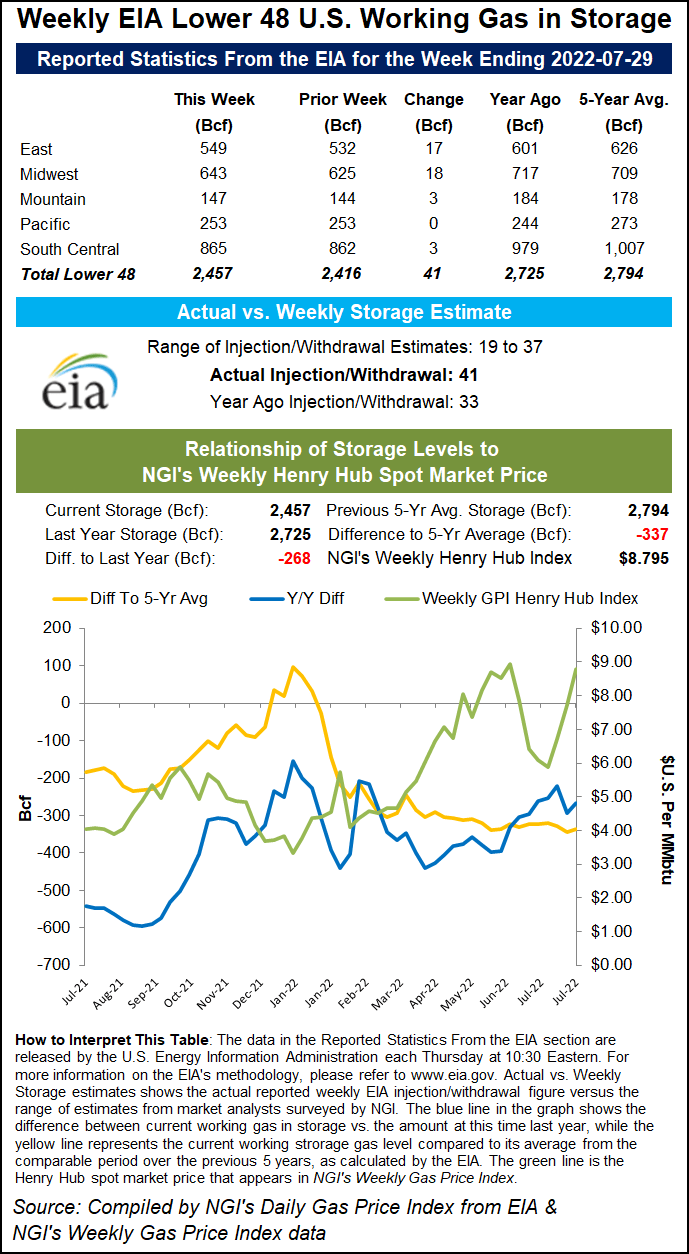 Nymex futures also ended the week lower even as bulls pounced on Freeport LNG’s announcement that it would return all three liquefaction trains to operation in October. After digesting the liquefied natural gas export facility’s return, and with loosening in the latest government inventory data, the September Nymex contract settled Friday at $8.064, off 21.9 cents from Monday’s close.

The steep losses recorded in cash markets in the first week of August were led by the Southeast, which continues to bake under scorching hot weather. But with gas prices in the double digits in some parts of the region, coal generation is seen shouldering some of the loads previously served by gas.

The stout $2-plus losses extended into Louisiana, but the majority of locations in the Bayou State saw prices fall between 50.0 cents and $1.00 week/week. Henry Hub fell 69.0 cents to $8.105.

Similar price declines extended across most of the country. In the Northeast, however, several locations ended the week higher after record-setting temperatures that soared into the 90s and approached the century mark.

Forecasts showed cooler weather, at least temporarily, this weekend as torrential downpours were set to wash over the region. The best chance of widespread downpours and gusty thunderstorms late Friday are from Washington, D.C., and Baltimore to Philadelphia, New York City and Boston, according to AccuWeather. The soggy pattern may linger into Saturday.

“It looks like a gradual return to sauna conditions for the Northeast in general from Sunday to Tuesday as high pressure builds over the nearby Atlantic,” AccuWeather senior meteorologist Joe Lundberg said. Northern New England temperatures may rebound the fastest on Sunday because of ongoing dryness.

Futures Down. Are More Losses Ahead?

In a summer dominated by record heat, Wednesday’s news that Freeport LNG’s “initial operations” would allow 2 Bcf/d of exports provided the market an unexpected jolt in the last half hour of trading.

The swift price response – a whopping 93-cent intraday climb – appeared warranted. After all, the market has struggled to rebuild storage inventories as intense heat in June and July has necessitated more gas for power generation. In Texas alone, the electric grid operator for 90% of the state – the Electric Reliability Council of Texas (ERCOT) – has seen its peak power loads set fresh records on 11 days this summer.

The grueling heat has been a setback amid a steep uphill battle in closing up the 300-plus Bcf storage gap that’s lingered since the winter.

Thursday’s Energy Information Administration (EIA) inventory report provided some optimism that balances may be beginning to loosen. The EIA said stocks for the week ending July 29 rose by a larger-than expected 41 Bcf. The figure surpassed both the previous year’s injection and the five-year average build.

Wood Mackenzie senior analyst Eric Fell said compared to degree days and normal seasonality, the reported 41 Bcf injection appears loose/bearish by about 1.9 Bcf/d versus the prior five-year average. This is notable since the above-average injection occurred during a period in which degree days also were above normal.

However, Fell said that while nuclear and renewable generation were close to unchanged week/week, there was a noticeable increase in coal generation – around 8 Average GWh – that drove gas burns lower versus the prior week.

Forecasts for weakening Texas wind, though, may support power burns in gas-heavy ERCOT, according to EBW. The firm noted that electricity loads should remain above normal, but demand is likely to stay well off recent records.

The trade-off between softening physical balances, particularly if a tropical threat develops later this month, set against an uncomfortably tight storage trajectory may be the defining market dynamic for natural gas heading into mid- to late August.

Indeed, Freeport LNG’s potential return in October would occur just before the official winter season gets underway. With a continued call on U.S. LNG to help Europe refill storage inventories in preparation for low Russian imports, and a growing appetite among Asian buyers to stock up before winter, U.S. feed gas deliveries could swell to more than 13 Bcf/d.

EBW’s most-likely end-of-October storage trajectory dropped to 3,325 Bcf with the Freeport news, nearly equivalent to its outlook calling for 3.3 Tcf when Freeport initially went offline in early June. On a seasonal basis, the market currently has less than three months remaining in the injection season to address widening storage deficits. This suggests the risk of more acute upward pressure for Nymex gas futures.

Lower Cash Ahead Of Weekend

Spot gas prices were overwhelmingly lower on Friday, with the typical lull in demand over the three-day delivery period dragging down cash across the country. However, there are bursts of cool air forecast in the Pacific Northwest that should soften demand and produce some precipitation for the region as well.

The National Weather Service (NWS) said a cold front was to slowly advance through the Pacific Northwest and into the Northern Plains over the next few days. The advancing cold front was expected to trigger thunderstorms across the Northern Plains before reaching into the Upper Midwest. Some of these storms may become more organized over portions of the Upper Midwest, with heavy rainfall possibly setting up in proximity to a developing wave of surface low pressure.

Meanwhile, monsoonal showers would continue to rule farther south over the Great Basin and the Four Corners region, according to NWS. It said the rains may shift eastward across the central and southern Rockies over the weekend.

According to PG&E’s maintenance schedule, capacity through the Redwood Path would briefly resume near max capacity on Gas Day 17 before being cut again by another 330 MMcf/d from Gas Days Aug.18-30.

Over in the Northeast, a forecast for heavy showers over the weekend failed to stop small increases at several locations. Iroquois Zone 2 cash was up 4.0 cents to $8.290. 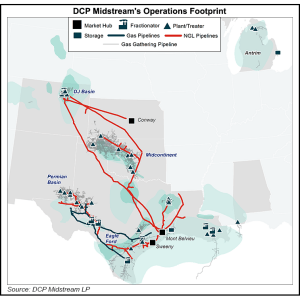