December natural gas futures strengthened Wednesday as the possibility of chillier weather in the medium range and persistently low storage inventories once again caused jitters for the market. The Nymex December futures contract rose 7.4 cents to $3.261, while January climbed 5.8 cents to $3.302. 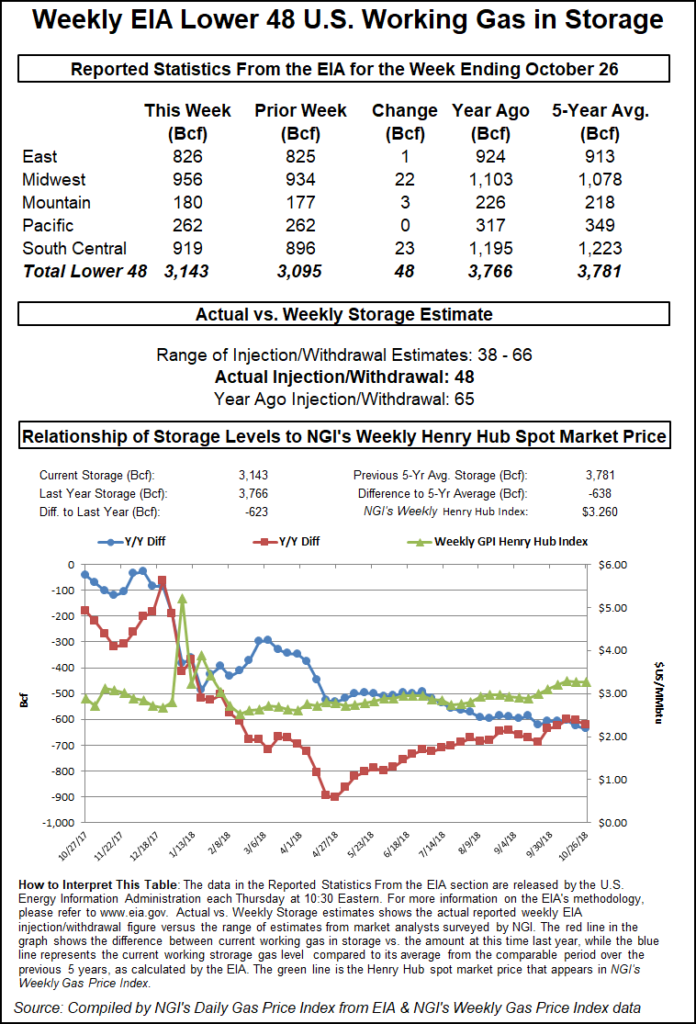 Spot gas prices were lower again Wednesday as rather comfortable temperatures were expected across the country before another cold weather system drops into the Midwest overnight. The NGI Spot Gas National Avg. slipped 3.5 cents to $2.985.

On the futures front, the Nymex December contract was a couple of cents higher right at the start of trading and rose to an intraday high of $3.287 before easing a bit into the settle. At the heart of the increases was the possibility of colder weather moving in mid-month, with the Global Forecasting System maintaining the cold in its latest runs, according to NatGasWeather.

The European model, however, showed a milder set-up for the Nov. 13-15 period, and even midday data runs failed to alleviate the discrepancies between the two models used most by the natural gas industry. By Wednesday afternoon, after the close of trading, the European model came more into convergence in showing the colder risks.

Despite Wednesday’s price gains in response to the increase in projected demand in the 11-15 day window, the real story in the medium term is weather during the 16-30 day window, EBW Analytics said. The ensemble models continue to show the potential for cooler-than-normal or “blow-torch hot” outcomes, the firm said.

On Wednesday morning, “the much warmer-than-normal scenario gained support. While it is much too early to determine which forecast will validate, the blow-torch warm scenario, if it materializes, would send prices down sharply,” EBW CEO Andy Weissman said.

But market observers were also looking ahead to Thursday’s Energy Information Administration (EIA) weekly storage report as hefty storage deficits remain only weeks ahead of the core winter season. Estimates clustered around a build in the low 50 Bcf range, which is well below the year-ago 65 Bcf injection and the five-year 62 Bcf build.

Last week, the EIA reported a 58 Bcf injection that lifted inventories to 3,095 Bcf.

Despite the bullish historical comparisons in storage data, Bespoke has pointed to looseness that recent EIA reports have reflected and additional looseness expected in the days ahead. “Cold is lingering more than expected, and with Canadian imports revised even lower, this is canceling out record production and making the front of the strip jumpy. We do note that weather-adjusted power burns have loosened to start the week, and once nuclear outages ease, they should loosen further and likely weaken physical prices,” chief meteorologist Jacob Meisel said.

Furthermore, the forecaster said once weather model guidance agrees more clearly on the pattern breakdown late Week 2 into Week 3, it believes prices at the front of the Nymex futures strip could break down toward $3.10, “but the signal is not yet clear, and with gas-weighted degree day adds, a bounce is possible first.”

Indeed, many market observers had been pinning their hopes on a mild start to winter and record production eating away at stubborn storage deficits to ease supply concerns for the winter. But with earnings season in full swing, there are signs that production growth could begin to slow as many exploration and production (E&P) companies have already exhausted their budgets for the year.

Take out the $300 million increase EQT Corp. plans to spend in 2018, and U.S. capital expenditures (capex) for the year are projected to be up by less than 1% versus budgets that were announced during 2Q2018, according to NGI’s preliminary analysis.

“U.S. E&P companies have pretty much left their E&P budgets for the rest of the year unchanged, which lends credence to the general message from oilfield service companies that activity could slow the rest of 2018 because of the exhaustion of capex budgets across much of the industry,” noted NGI’s Patrick Rau, director of Strategy and Research.

Seasonal holiday-related slow downs should also lead to lower activity, but that may be more on the completion side, as Rau noted that Nabor Industries is guiding the U.S. rig count will actually rise by another 10-15 rigs by the end of the year, based on its quarterly survey of its E&P customers.

“Operators simply do not want to lay down the top of the line super-spec rigs, so we’d expect any slowdown in activity to lead to more drilled but uncompleted wells exiting the year.”

Spot gas prices were lower across much of the United States as warm high pressure was expected to strengthen across the eastern and southern regions Wednesday to Thursday with high temperatures forecast in the 50s to 80s, and the hottest conditions expected over the Southeast, according to NatGasWeather. California and much of the West were expected to remain mild to warm.

Meanwhile, a weather system with heavy showers was forecast to push into the central United States and Midwest with rain, snow and slightly chilly conditions as overnight lows were expected to drop into the 20s to 40s. “This system will track into the East Friday-Saturday for a swing to stronger demand,” the forecaster said.

Northwest Sumas continued to plunge on word that Enbridge Inc. would be boosting gas flows into the Pacific Northwest. In a notice on its website, the company said Station 4B South capacity would allow up to 934,891 gigajoules (Gj) to flow on Thursday and Friday (Nov. 1-2). Capacity through its Huntingdon delivery area would increase to more than 1.928 Gj beginning Thursday until further notice.

Enbridge said changes in operating conditions may result in the capacity being recalled on any gas cycle, and further changes would be evaluated daily.

Transco prices could see some upside in the days ahead as Transcontinental Gas Pipe Line (Transco) is scheduled to begin maintenance on Friday on the Leidy Line that is to last until Nov. 14. During this event, production from the Tombs Run and Breon gathering systems in Lycoming County, PA, will likely be shut in. Production has averaged 730 MMcf/d and reached as high as 790 MMcf/d during the last two weeks, according to Genscape Inc.

“This is essentially the same event that was run on Sept. 24, with the only difference being the addition of the Breon meter to this event. During the last event, we saw reroutes onto Tennessee Gas Pipeline at the Dunkleberger Tioga meter,” Genscape natural gas analyst Josh Garcia said.

“This event should provide bullish pressure for the entire region as less supply will be available for Zones 5 and 6 demand,” Garcia said. Temperatures in the Northeast were forecast to be below the 30-year average for the first five days of the outage, then are expected to drop slightly below average for the duration of the event, according to Genscape.

Other parts of the country were less volatile as major hubs like the Chicago Citygate in the Midwest fell 7.5 cents to $3.105 and Houston Ship Channel in East Texas dropped 13 cents to $3.42.

During the previous two days deliveries to Sabine dipped below 2.5 Bcf/d with maintenance on Creole Trail Pipeline and Texas Eastern Transmission (Tetco). Tuesday evening, Creole Trail posted an update to its planned Gillis Compressor Station maintenance, which initially began on Monday and restricted the pipeline’s capacity to 1.2 Bcf/d.

The update stated that for gas day Wednesday (Oct. 31), the pipeline capacity would be further reduced to a maximum of 900,000 Dth/d, or roughly 878 MMcf/d. However, as of evening cycle nominations, receipts had actually rebounded from a previous localized low on Tuesday (Oct. 30) of 754 MMcf/d to 1.25 Bcf/d for gas day Wednesday, about 350 MMcfd over posted capacity restrictions, Genscape said.

When operating under normal conditions, Creole Trail provides 1.5 Bcf/d of North-to-South flows to Sabine Pass with receipts from Transco, Tetco and Trunkline. Creole Trail has also filed an extension and expansion project with FERC (CP13-553) to increase deliveries to Sabine Pass to up to 3.0 Bcf/d.

Meanwhile, Genscape’s LNG group issued a note to clients on Tuesday that its “proprietary cameras have detected notable operations that may suggest Sabine Train 5 is closer to startup than expected,” natural gas analyst Allison Hurley said.