*Part 3 of 3. Historically low storage inventories are doing battle with surging unconventional output — raising the stakes and uncertainty for bears and bulls heading into the winter. This series lays out a roadmap for what could influence natural gas markets during the upcoming Winter 2018/19 heating season. Part 1 looked at markets in the East and Midwest. Part 2 examined the South Central region. 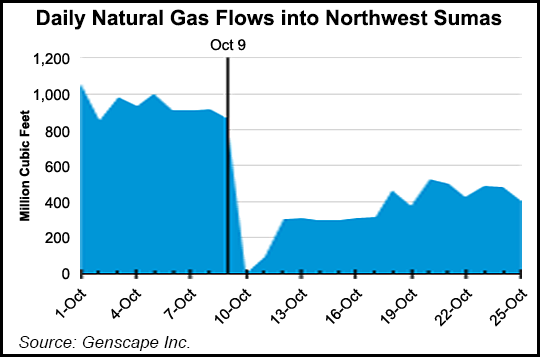 With strained natural gas import capacity, ongoing restrictions at a key regional storage facility and an unexpected cut in supplies from north of the U.S. border, the West Coast, Pacific Northwest and Rockies are banking on forecasts for mild weather to get them through what could be a tumultuous winter.

Winter weather outlooks showed the return later this fall of El Niño conditions, which typically bring wet and cool weather to the Southwest. Drought conditions were expected to improve in areas throughout Arizona and New Mexico, southern sections of Utah and Colorado, the coastal Pacific Northwest and the Central Plains, according to the National Ocean Atmospheric Administration’s (NOAA) winter outlook.

AccuWeather said the projected El Niño pattern was forecast to be a bit different this year as the interior Southwest is likely to end up drier, with more precipitation reaching central California, particularly midseason, according to AccuWeather.

“It will still be a bit of a down year as far as moisture goes. El Niño may not give them what they need, and they could go back into a drought next year,” AccuWeather expert long-range forecaster Paul Pastelok said.

For Southern California, this winter’s outlook looks similar to last winter’s actual weather, which was also exceptionally mild until mid-February, according to Genscape. “From mid-February through the second week in March, cold weather drove up demand and drew down storage inventories,” Genscape natural gas analyst Joe Bernardi said.

At 2,586 MMcf/d, Southern California winter demand was not only lower than forecast heading into the season, “it was 239 MMcf/d lower year/year and 179 MMcf/d lower than the previous three-year average,” Bernardi said.

“If the forecast is correct, California may be one of the biggest beneficiaries of the expected milder winter,” Morningstar Commodities Research analyst Matthew Hong said.

Import Limits Still in Place Until At Least Spring

For Southern California, the biggest risk if winter conditions turn unexpectedly chilly is that import capacity into the region has remained severely limited ever since an Oct. 1, 2017, explosion in the Mojave Desert damaged and took out of service two Southern California Gas Co. (SoCalGas) lines, reducing capacity into the Northern Zone by 1 Bcf/d.

Until last month, SoCalGas had provided little information regarding repair progress. In an Oct. 5 notice on its website, however, the pipeline stated that the best-case scenario would see L235-2 return to service in mid-April 2019, with remediation on L4000 beginning after that.

SoCalGas could not predict what pressure the restored lines could support, so it was unclear how much import capacity might be restored following each of these fixes, Bernardi said.

The lines are a key feeder into Southern California, bringing natural gas from the El Paso Natural Gas system into the state. The limited capacity on these lines has required SoCalGas to find alternative supplies, such as increasing supply from Otay Mesa on the California-Mexico border.

Meanwhile, SoCalGas also has reductions in place in its Southern Zone due to what the pipeline has said is a combination of “lack of local demand coupled with pipeline outages”, with the reduction amount varying depending on system conditions.

Expectations of continued pipeline constraints are likely a reason for higher storage inventories this injection season compared with a year ago, but concerns remain about meeting reliability, analysts said.

SoCalGas storage is currently at 80 Bcf, the maximum that Genscape expects to see given the current inventory cap at the Aliso Canyon facility is just under 85 Bcf. Using the average storage transactions by date over the past two years from this point forward would get inventories up to as high as 82 Bcf, according to Bernardi.

Over the last month or so, SoCalGas has been roughly 15-20 Bcf above the previous two years’ inventory, and this 82 Bcf or even 85 Bcf would be in line with that. “SoCal’s storage situation is in limbo right now. From a reliability standpoint, it’s helpful that there’s more gas in storage, but that helpfulness is reduced due to the ”asset of last resort’ status of Aliso Canyon,” Bernardi said.

Indeed, the Aliso Canyon Risk Assessment Technical Report supplement for this winter that was posted earlier this month by the California Energy Commission indicated that SoCalGas remains unable to meet its one-in-10-year peak cold day forecast gas demand of 4.965 Bcf and a conservation mindset will need to be applied for another heating season. While acknowledging that Aliso Canyon can help meet seasonal winter demand, the facility “is a resource of last resort and subject to the withdrawal protocol” established by the California Public Utility Commission, the outlook said.

SoCalGas plans to implement a few adjustments and mitigations to fulfill a system send-out of 4.0 Bcf/d, but that volume falls short of the 1-in-10-year peak cold day forecast demand, according to Morningstar. “Any unplanned outages or higher-than-expected demand could force the use of emergency inventories held at Aliso Canyon, leading to higher prices and the implementation of other emergency measures to maintain a reliable system,” Hong said.

Erratic price swings have been the norm at SoCal Citygate since the two SoCalGas lines went down last fall. “There certainly was some added volatility when Aliso Canyon started leaking, was plugged and then was completely restricted for a time, but the magnitude of price movements increased notably when these import lines went down last fall,” Bernardi said.

This past summer was a perfect example of the volatility the line outages could bring, when during an exceptionally hot July, SoCal Citygate spot gas prices jumped nearly $5 day/day to an average $8.28 for the July 5 gas day. By the July 19 gas day, spot gas had rocketed up to more than $13 and for gas day July 23, spot gas reached an all-time high of $39.24 as demand on the SoCalGas system reached 2.9 Bcf/d, a level just slightly above historical winter average demand levels.

While California has hobbled along with limited storage at Aliso Canyon and the major import restrictions for more than a year now, the summer’s heat-induced price swings are clearly weighing on the market’s mind as SoCal Citygate winter forward prices are tracking significantly higher than they were even a few months ago.

As of Oct. 29, fixed prices stood at $5.745 for November, at $8.10 for December and at $6.13 for the winter strip (November-March), according to NGI’s Forward Look. In the first week of July, before the first major heat wave hit the region, the SoCal Citygate winter strip stood at $4.11.

With no resolution to the infrastructure issues in sight, the Southern California market is likely to remain highly sensitive this winter, Hong said. “Knowing Southern California cannot cover a 1-in-10 peak temperature cold day with the slew of mitigations in place, the milder winter may be the one saving grace for the region. However, forecasts can and often do change.”

Although the system is capable of meeting demand on a one-off cold day, any sustained cold will result in a struggle to meet demand and restock in case of future weather anomalies, he said. If temperatures shift colder this winter and additional pipeline constraints materialize, “California may enter uncharted territory.”

The question of “if” additional pipeline constraints materialize is more of a certainty after the explosion on Enbridge Inc.’s Westcoast Transmission system early last month. The Oct. 9 rupture damaged a 36-inch line that halted exports of 1.1 Bcf/d to the United States, boosting cash and forwards markets alike for SoCal Citygate and other western markets, but especially for Northwest Sumas.

Spot market volatility has been less pronounced in other western markets, but the price increase is still visible in the days before and after the explosion. SoCal Citygate October cash prices had averaged $3.66 before the explosion, but then rose to an average above $4 in the days since.

At Malin, cash averaged $2.605 before the blast, and then above $3 since. Forward prices for the core winter months (excluding March) also retained a $3 handle.

“The pipeline explosion definitely makes things look volatile for the winter for Sumas,” Bernardi said. “I’d expect Malin to feel some upward pressure too, if Sumas is looking to draw in as much supply as it can, although the pressure on Malin is much less intense than that on Sumas.”

While Enbridge returned to service a smaller, undamaged 30-inch parallel line shortly after the blast, it has operated at a reduced 80% capacity since. The company has since indicated it would bring the 36-inch T-South line back to service by mid-November, but said it too would operate at the reduced level. In fact, Enbridge noted that capacity on its T-South system was expected to range between 0.9 and 1.3 Bcf/d throughout the winter as a result of these reduced operating pressures.

By comparison, average southbound flows last winter at Station 4B were roughly 1.8 Bcf/d, “so this would still represent a cut of 0.5-0.9 Bcf/d of flows year over year,” Bernardi said.

In an Oct. 24 update, Enbridge said it continued to prioritize work on the pipe segments with the highest capacity gain. Based on its current forecast plan, the engineering assessments and approvals for these high-priority segments are expected to be complete by Nov. 30. This would result in increasing the Huntingdon constraint capacity to 1.2-1.3 Bcf/d.

Last Thursday, Westcoast announced that it had completed repairs on the section of 36-inch diameter pipeline that exploded, and as a result expected that it would return some additional southbound flow capacity by the Nov. 3-4 weekend.

The increased flows would allow up to 900 MMcf/d through both the Station 4B South and the Huntingdon constraint groups, Genscape said. Previously, this maximum capacity was 800-850 MMcf/d. Going forward, Westcoast will be inspecting its T-South system at various points along the line to ensure operating integrity.

Bernardi said Northwest Pipeline doesn’t have much additional room for increased Rockies gas flows this winter, and “we’d expect them to continue to bring in as much as they can for Pacific Northwest demand with the Westcoast/Sumas flow cut. This event probably puts a bit more importance on Ruby flows, for getting Rockies gas west to get to Malin.”

Indeed, on Oct. 23, the 1.5 Bcf/d Ruby Pipeline, which transports Rockies natural gas to western demand markets, flowed 1.25 Bcf/d of natural gas to the California-Oregon border at Malin — the highest flows reported on Ruby since November 2015, according to the Energy Information Administration.

Meanwhile, the Westcoast constraints were having the opposite effect on prices in western Canada, where Westcoast Station 2 cash prices were trading in the C$2 range before the explosion but then have gone on to average below C50 cents in the days since, notching four days of negative prices, NGI data show.

NOVA/AECO October spot gas averaged C$2.29 before the line rupture but has fallen to a sub- C$1 average in the days since, also falling into negative territory on one day. On the forward curve, November stood Oct. 29 at $1.49, December stood at $1.81 and the winter strip stood at $1.725, according to Forward Look.

In addition to the Westcoast blast, NOVA/AECO has been plagued by other maintenance events on TransCanada’s NGTL line that have restricted exports and the ability to inject gas into storage. Aging systems, the lack of additional takeaway capacity and regulatory uncertainty in Canada have investors growing weary.

On a call to discuss quarterly earnings, Calfrac Well Services Corp. CEO Jose Fernando Aguilar said “the risk of investing in Canada remains elevated” and the uncertainty as to resolutions of its issues limit the attractiveness of the Western Canadian Sedimentary Basin as a place to invest growth capital. “We do not see the overall Canadian marketplace growing significantly in 2019 and expect clarity on programs to improve in the weeks ahead.”