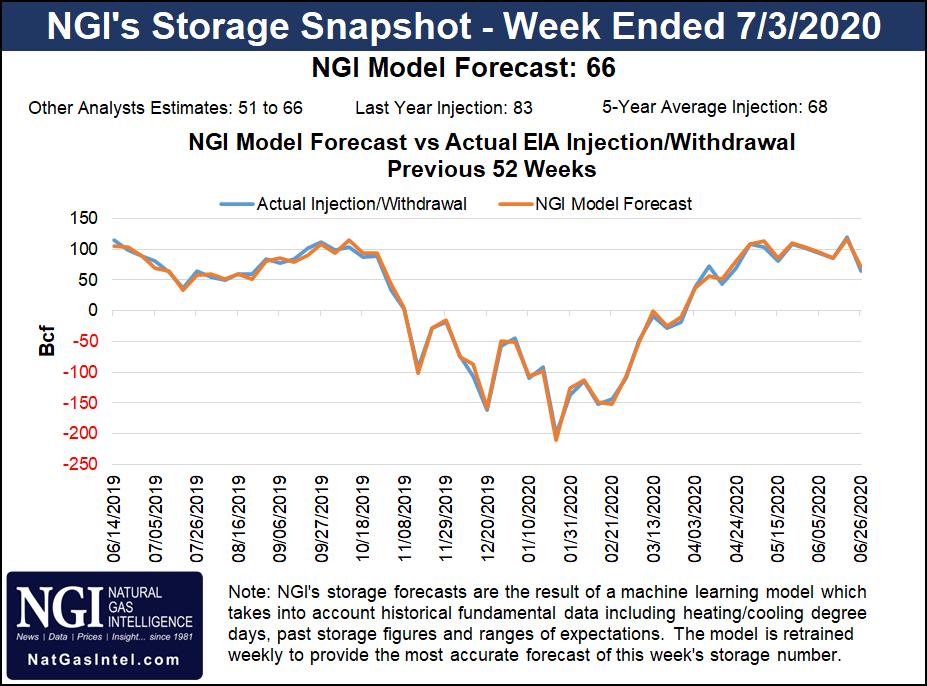 After swooning to a 25-year low in late June, gas prices had advanced 40 cents, including strong gains over each of the three trading days prior to Wednesday. Forecasts for scorching July heat fueled expectations for robust cooling demand.

But lingering LNG worries – amplified by continued spread of the coronavirus and uncertainty about economic activity driving energy demand this summer – overshadowed more forecasts for potentially record heat in July, at least for one trading session.

LNG volumes “have again moved lower, marking yet another new low for the year so far,” Bespoke Weather Services said, referring to slight declines in early Wednesday data and, moreover, July feed gas demand falling more than 1.2 Bcf/d from the June average and hovering below 3.0 Bcf/d to date in July.

The pandemic sapped European and Asian demand for U.S. LNG exports, and with a resurgence in virus cases in the United States and other countries across the globe in June and July, uncertainty reigns about the depth and duration of the public health crisis and its impact on both domestic and foreign economies.

“The low LNG volumes continue to be the main factor creating headwinds against rallies,” Bespoke said. “As long as LNG stays down at these levels, the market is likely to maintain some concern about storage levels, so the nearer term can remain choppy.”

After several days of robust gains, profit-taking likely factored into Wednesday’s decline as well, NatGasWeather said. However, continued expectations for lofty summer temperatures could prove a strong headwind for gas prices, the forecaster said, with daily national cooling degree days expected to be hotter than normal over the next 15 days.

“The pattern remains especially bullish July 16-23 as upper high pressure is forecast to dominate much of the United States, with widespread heat that will push temperatures into the 90s and 100s, and high humidity that will push the heat index into the dangerous 100-120 range,” NatGasWeather said. “We continue to expect this widespread very warm to hot U.S. pattern will last through the end of July.”

Tudor, Pickering, Holt & Co. analysts said “record heat has descended on most of the country and is expected to last for the bulk of July. This likely results in power burn for July coming in 2 Bcf/d higher than last year.”

Analysts said Thursday’s Energy Information Administration (EIA) storage report for the week ending July 3 could shed light on how much weather is motivating power burns and, by extension, gas demand.

For the July 3 week, a Bloomberg survey found injection estimates ranging from 55 Bcf to 62 Bcf, with a median of 59 Bcf. The average of a Wall Street Journal poll was 57 Bcf, with a low estimate of 51 Bcf and a high of 63 Bcf. A Reuters poll found estimates ranging from 51 Bcf to 65 Bcf and an average of 58 Bcf. NGI estimated an injection of 66 Bcf.

Energy Aspects estimated an injection of 54 Bcf for the July 3 week and said the focus is on power burns. The firm estimated a 15% increase in population-weighted cooling degree days, enough to boost gas burns by 1.5 Bcf/d week/week.

With the heat wave intensifying, spot prices advanced across most of the Lower 48, though there were exceptions in the Midwest and parts of Texas.

Maxar’s Weather Desk said forecasts for the next six to 10 days continue to look favorable for gas prices. “Above-normal temperatures are widespread in coverage, as a strong ridge established over the Southwest early in the period expands north and eastward with time,” the firm said.

In the coming days, forecasters will also assess the potential impact of Tropical Storm Cristina. The storm has formed in the eastern Pacific, well off the coast of Mexico, but the U.S. National Hurricane Center said this week that it could become that region’s first hurricane of the season.

On the pipeline front, Columbia Gas Transmission declared a force majeure late Monday that has restricted flows on the MXP Line south of the Mount Olive Compressor Station. The work is expected to last at least through July 13, Genscape Inc. said. Additionally, the firm said that planned maintenance on the Nexus Gas Transmission system is expected to last through Thursday.

“These two events have cut production significantly in the Northeast,” Genscape said. “However, production has rebounded” from Tuesday “as some flows have rerouted.”

Meanwhile, Kinder Morgan Louisiana Pipeline (KMLA) has planned a one-day pipeline maintenance event Thursday on a portion of its system. As a result, transport services are to be unavailable to Sabine Pass liquefaction facilities from KMLA, impacting up to 350 MMcf/d of feed gas deliveries that day, Genscape said.