The United States added nine rigs to grow its count to 1,080 for the week ended Friday (Dec. 21), helped by an uptick in oil-directed drilling including gains in the Williston Basin, according to data from Baker Hughes, a GE Company. 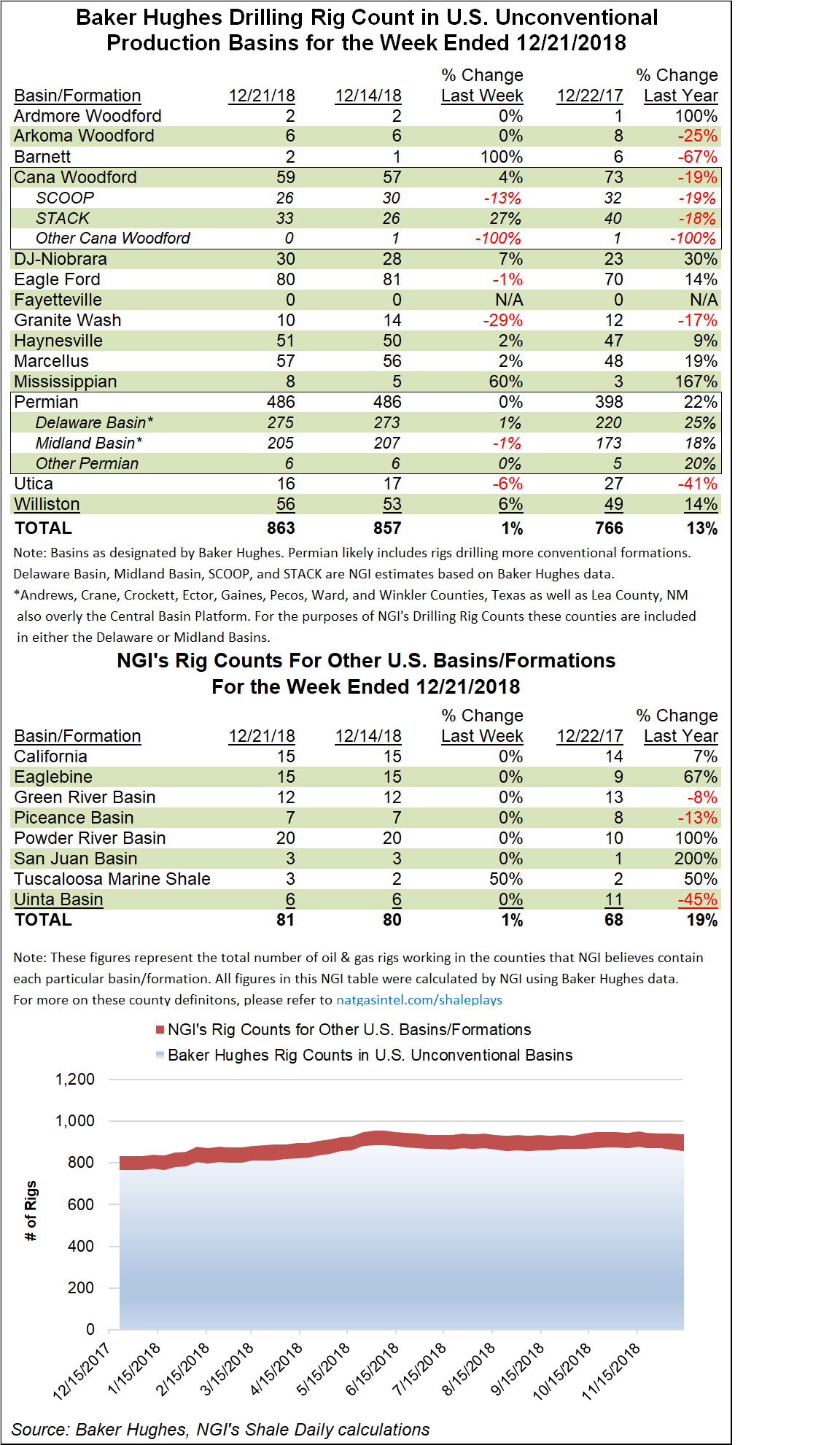 The week/week (w/w) change to the U.S. count included the addition of 10 oil rigs, offsetting the loss of one natural gas-directed unit, putting the domestic count 149 units ahead of its year-ago tally of 931.

The gains included eight units on land, with the Gulf of Mexico adding one rig to finish the week at 24, versus 19 in the year-ago period. Two directional units and two vertical units left the patch, offset by the addition of 13 horizontal units.

Meanwhile, Canada saw its drilling count plummet heading into the Christmas holiday, with 37 oil-directed rigs and six gas-directed rigs packing up shop. That left the combined Canadian count at 131 for the week, down from 210 rigs running at this time last year, according to BHGE.

Among plays, the biggest w/w gains came in the Williston — home to the Bakken Shale — and the Mississippian Lime, which each added three rigs to their respective tallies. The Cana Woodford and Denver Julesburg-Niobrara each picked up two rigs for the week, while the Barnett, Haynesville and Marcellus shales each added one.

On the other side of the ledger, four rigs departed the Granite Wash for the week to leave the play at 10 rigs, down from 12 rigs running a year ago. The Eagle Ford and Utica shales each dropped one rig w/w.

Among states, North Dakota posted a w/w gain of three rigs, in line with the increase in the Williston. Louisiana saw two rigs return to action in the state, while Colorado, New Mexico, Oklahoma and Pennsylvania each picked up one rig from a week earlier. Alaska, Ohio and Texas each saw one rig pack up shop for the week.

The rise in oil-directed drilling activity for the week came as New York Mercantile Exchange West Texas Intermediate crude oil futures had stumbled to around $46/bbl as of Friday, down sharply from prices above $75/bbl just a few months ago.

During the week, West Texas explorer Parsley Energy Inc. joined a growing chorus of Permian Basin operators in announcing it will reduce development activity in 2019 because of a “less favorable commodity price environment.”

The Austin, TX-based independent said it plans to deploy on average 12-14 rigs and three-four fracture spreads in 2019, down from a recent run rate of 16 rigs and five spreads.

“The proposed development program is consistent with our strategic framework oriented to discipline, foresight and stability,” President Matt Gallagher said. “Despite a less favorable commodity price environment, we still intend to take a significant step toward free cash flow generation in 2019. In fact, we are committed to a material reduction in operational outspend no matter the commodity price environment.”

Permian pure-play Ring Energy Inc. is planning to run only one rig during 2019, as it works to turn cash flow neutral/positive in the second half of the year, while still growing production an estimated 20% year/year.

The Midland, TX-based independent reported earlier in the week that completion and clean-up delays had decreased expectations about how many horizontal wells would be drilled in the fourth quarter — and its forecast for production.

Diamondback Energy Inc. has dropped three rigs, reduced completion crews and plans conservative spending in 2019 because of the “dramatic decline” in oil prices.

The Midland, TX-based independent issued 2019 capital and production guidance during the week, indicating it plans to operate 18-22 rigs versus 24 currently; three rigs have been dropped. Eight completion crews are planned for 2019 after releasing two crews this month.