Williams Partners LP is delaying the target in-service date for its Atlantic Sunrise expansion project to mid-2018, with partial service on the project starting in late 2017, it said Friday. 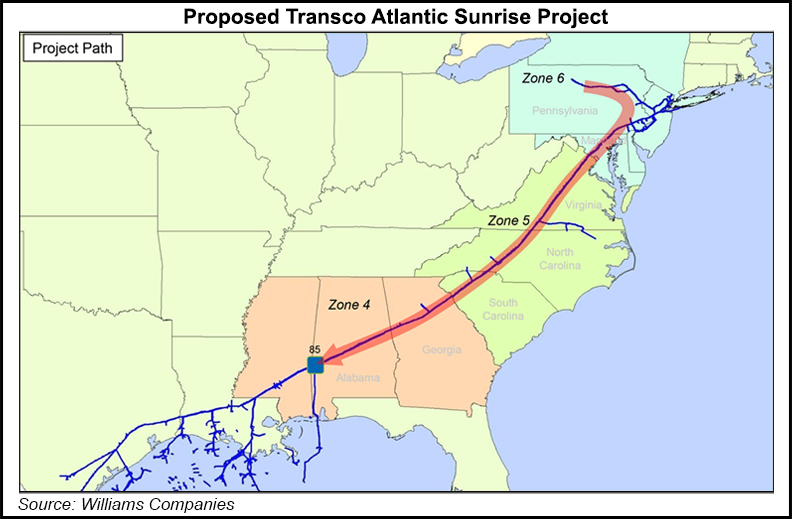 The Tulsa, OK-based company pointed to the revised environmental review schedule FERC released last week for the project as the reason for the delay. In an Oct. 20 filing on the Atlantic Sunrise docket [CP15-138], staff for the Federal Energy Regulatory Commission pushed back the release of the final environmental impact statement (EIS) to Dec. 30, with a final decision arriving as late as March 30, 2017 (see Shale Daily, Oct. 20).

Williams said Friday it expects to begin work on expanding the Transco mainline in mid-2017 to open up capacity running from the northern portion of system to Southeast market areas in time for the winter 2017-2018 heating season.

“Unlike other Marcellus takeaway projects, a leading advantage of Atlantic Sunrise is that through modifications to the existing Transco mainline, the project will be able to deliver a highly effective, environmentally-responsible solution to connect Pennsylvania natural gas production with markets hundreds of miles away,” Williams’ Rory Miller, senior vice president of the Atlantic-Gulf operating area, said.

The roughly $3 billion Atlantic Sunrise project aims to open up a path for constrained Marcellus Shale gas to reach markets in the Southeast through the Transco system running along the Atlantic seaboard. According to the project’s draft EIS, the expansion would include about 197.7 miles of pipeline composed of about 184 miles of new 30- and 42-inch diameter pipeline for the greenfield CPL North and CPL South segments in Pennsylvania; about 12 miles of new 36- and 42-inch diameter pipeline looping known as Chapman and Unity Loops in Pennsylvania; about three miles of 30-inch diameter replacements in Virginia; and associated compressor stations, equipment and facilities.

Earlier this month, FERC requested additional information on a pair of minor route alternatives for Atlantic Sunrise’s greenfield segments in Pennsylvania, which caused some heartburn for Williams and anchor shipper Cabot Oil & Gas Corp., whose stocks took a hit when news of the filing spread and the market began to speculate on the possibility of a delay (see Shale Daily, Oct. 14).

Cabot, which held a conference call Friday to announce its 3Q2016 results, signed up for 850 MMcf/d on Atlantic Sunrise (see related story).

FERC issued a favorable draft EIS for Atlantic Sunrise in May (see Daily GPI, May 6).