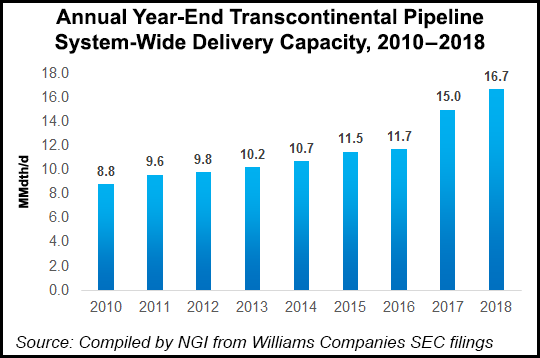 The news came one day after management for the midstream giant lowered its capital expenditures (capex) for 2019 while raising profits guidance.

The Federal Energy Regulatory Commission’s certificate of public convenience and necessity authorizes the Tulsa-based operator to construct NESE, which would provide 400,000 Dth/d to National Grid, the largest gas distributor in the Northeast.

Williams expects to begin construction this fall on the fully subscribed project, which received its environmental impact statement in January. But the New York Department of Environmental Conservation has yet to grant Transco’s application for a water quality certification (WQC), which could complicate that timeline. State regulators are expected to make a decision about the WQC application by May 15.

Meanwhile, the company has revised its consolidated growth capex guidance to a new midpoint of $2.4 billion, down from $2.8 billion provided in the final quarter of the year. Full-year net income guidance was increased to $1.1-1.4 billion from $1.05-1.35 billion, while earnings/share is now 83 cents-$1.07/share, up from 77 cents-$1.01.

“This is the result of the crisp execution of our portfolio optimization transactions and continued tight discipline around capital deployment,” Williams CEO Alan Armstrong said during a conference call to discuss first quarter earnings.

Williams reported net income of $194 million for the quarter (16 cents/share), a 28% gain from 1Q2018 earnings of $152 million (18 cents), largely led by the Atlantic-Gulf and Northeast gathering and processing (G&P) segments.

The company brought online the final portion of its massive Atlantic Sunrise pipeline project in October, which added a whopping 1.7 Bcf/d of transportation capacity along the Eastern Seaboard. Subsidiary Transcontinental Gas Pipe Line Co. (Transco) previously added interim service associated with the completion of brownfield portions of Atlantic Sunrise, including an incremental 400,000 Dth/d that came online in August 2017 and another 150,000 Dth/d that went online last May.

The midstreamer has another 20-plus Transco projects in development, including the Regional Energy Access Project, which is in the middle of a binding open season that was extended to Wednesday (May 8) from April 8 to give shippers additional time to get approvals they needed for indication of interest and binding commitments. Williams is targeting a final investment decision in the third quarter with pre-filing to follow.

While gas takeaway capacity in the Permian Basin is expected to remain insufficient for at least the next year and a half, Williams management remains “cautious in ensuring that any project that we would proceed with is one that has really solid fundamentals in economics.” While the company continues to build upon Transco’s connectivity both on the supply and on the demand side, if it were to move forward on any project, it would be with partners.

“We are not looking to make an investment of that scale out of the basin on our own,” Armstrong said.

Meanwhile, the company chief took time to tout the level of detail in President Trump’s executive orders related to energy infrastructure and said Williams was “appreciative of the administration’s efforts..” That said, management is well aware that any major shifts in policy coming out of the executive orders will likely be challenged and praised its project teams for navigating challenges that have come up during various permitting processes.

On the gathering side, volume increases were led by the Susquehanna Supply Hub area, which grew about 25%, as well as double-digit growth rates in the Marcellus South and Utica and high single-digit growth in the Bradford and Ohio Valley Midstream areas. “Overall, a very nice start to the year for the Northeast G&P,” Armstrong said.

The company’s West segment realized lower natural gas liquids margins because of a temporary surge in natural gas prices and the effects of severe winter weather affecting one of its key customers in the Wamsutter field in Wyoming. “Importantly, our operations team in the area was able to keep our facilities ready and available, but upstream production freezing off was the culprit in the area,” Armstrong said.

The company chief noted that he expected demand growth to ultimately drive producer volumes over the long term, despite the recent decline in commodity prices. “Demand from converted power generation, LNG exports and new industrial loads are continuing to grow after several years of heavy capital investment and construction. And now we are seeing a second wave as the Permian gas supplies will further convince the world that the U.S. has suitable low gas supplies for decades to come.”

As a result, Williams management doesn’t believe the current downturn in pricing is sustainable given the “continuous growth in natural gas demand, coupled with the discipline we have seen from the producer community.”

And while Permian supplies are a needed resource to help build the demand, “we still have two-thirds of our gas applies here in the U.S. being generated by gas-only directed drilling that will have to have price signals” to incentivize investment. “It has become evident that we simply can’t get the infrastructure build fast enough out of the Permian to keep up with the demand it continues to grow,” Armstrong said.