Even as it revealed plans for a new natural gas liquids (NGL) expansion aimed at tapping supply from the Rockies and Denver Julesburg-Niobrara, The Williams Companies Inc. this week touted its focus on transporting low-cost natural gas to premium markets as the driver of “solid and predictable growth” in 2018 and beyond. 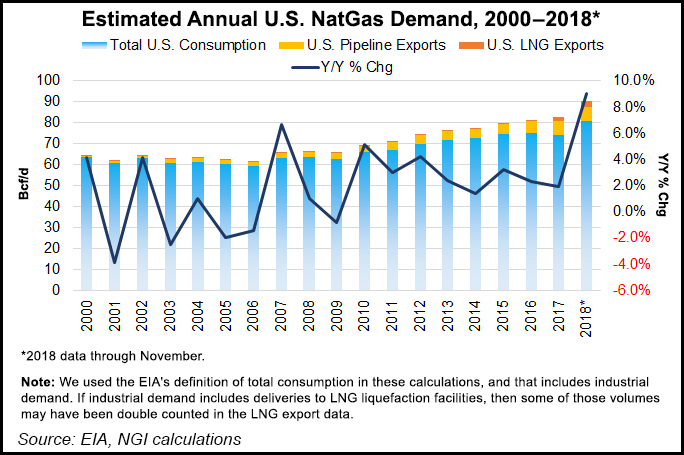 “What has happened is what we expected to happen, which is not just the U.S., but all of the world is really starting to take advantage of the U.S.’s ability to get gas out of the ground at such a low cost,” Armstrong said. “So, just to think about that 11% increase that we had this year, I think it’s helpful to put that in perspective…that 11% increase was greater than all of the dry gas production from the Permian Basin in 2018. So, just here in one year, we’ve had an increase that’s greater than all of the dry gas production coming out of the Permian today.”

This natural gas demand growth has shown up on the company’s pipelines, including a new delivery record this winter on the Tulsa-based midstreamer’s flagship Transcontinental Gas Pipe Line (aka, Transco).

“Late in the year, we saw the beginnings of accelerated Northeast G&P growth,” Armstrong said. “We expect this to continue for many years to come” as the “cloud” of takeaway constraints “finally has begun to lift for this basin.”

Management projects a 15% compound annual growth rate for gathered volumes in the Northeast G&P segment through 2021.

Asked about a recent shift among producers to focus more on cash flow over output growth and the impact that might have on Williams’ Northeast volumes, Armstrong said management is “very confident” in its projection, with “quite a bit of room” between the 15% figure and what producers have been forecasting.

“First of all, I think not all producers out there are created equal and certainly not all acreage is created equal,” he said. “For instance, if you look at Cabot [Oil & Gas Corp.], which is one of the primary drivers of our growth, they continue to show a very strong growth profile because they’ve got markets established upwards towards 4 Bcf/d. They’ve done a great job of getting the markets out in front of them, and we’re working furiously to keep our gathering system expanded to keep up with them.”

Meanwhile, following in the footsteps of the Permian-focused joint venture (JV) with Brazos Midstream announced late last year, Williams announced this week that it plans to team up with Targa Resources Corp. to link the Conway, KS, and Mont Belvieu, TX, NGL markets.

This includes plans for the 188-mile Bluestem Pipeline, a proposed NGL line that would run from the Tulsa pipeline giant’s fractionator in Conway and the southern terminus of the Overland Pass Pipeline to an interconnect with Targa’s Grand Prix NGL Pipeline in Kingfisher County, OK.

Targa would construct a 110-mile extension of the Grand Prix pipeline from southern Oklahoma into the STACK (aka, the Sooner Trend of the Anadarko Basin, mostly in Canadian and Kingfisher counties) region to connect with the Bluestem line.

“Expanding our NGL pipeline business to interconnect with Targa’s strategically-positioned Grand Prix Pipeline will provide Williams and our customers with access to Mont Belvieu while opening up additional markets for Conway,” Armstrong said of the JV.

“Additionally, this delivers a long-term infrastructure solution for NGLs from our Opal, Echo Springs, Willow Creek and Rocky Mountain Midstream processing complexes while also creating a platform for growth — offering us the opportunity to gain incremental downstream revenues as we expand our G&P business.”

As part of the project, Williams said it has committed “significant volumes” to Targa for transport on Grand Prix and for fractionation at Targa’s facilities at Mont Belvieu. Williams will have an initial option to purchase 20% equity in one of the recently announced Targa fractionation trains 7 or 8 at Mont Belvieu.

Targa’s Grand Prix expansion is expected to have an initial capacity of roughly 120,000 b/d. The companies are targeting an in-service date in the first quarter of 2021.

Williams reported a net loss of $572 million (minus 47 cents/share) for the fourth quarter, versus a net income of $1.687 billion ($2.03/share) in 4Q2017. Management attributed the loss to a $1.849 billion impairment for gathering assets in the Barnett Shale, offset by gains of $833 million from the sale of its Four Corners Area business, from the sale of certain Gulf Coast pipeline systems and from the “deconsolidation” of former Permian assets related to the joint venture with Brazos Midstream.