Legendary oilman Clayton Williams Jr., 88, who built an oil and gas empire in West Texas and made one unsuccessful bid to become the state’s governor, died Friday. 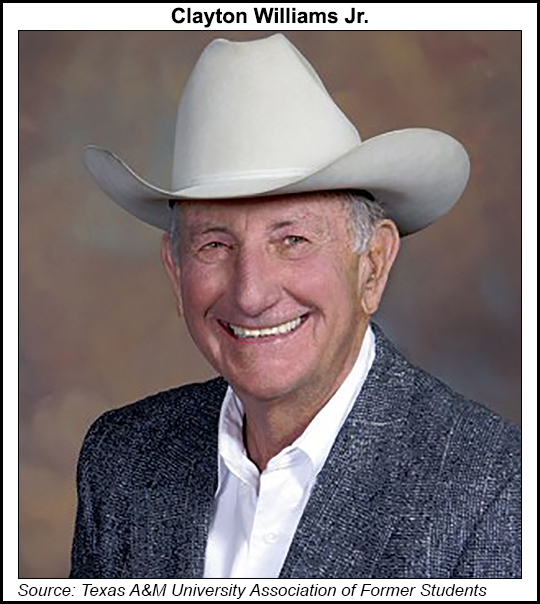 Claytie, as he was known to colleagues, was the son of Clayton and Chicora Lee Graham. He graduated from Texas A&M University in 1954 with a degree in animal husbandry and like his father, served in the U.S. Army.

In 1957, Williams then followed his father into the oilfields of West Texas, first as a leasebroker. He eventually founded more than two dozen companies, the most famous of which was Clayton Williams Energy Inc., which owned 3,000 wells in the Permian Basin, Alabama, Louisiana, Oklahoma and Utah.

The Midland, TX-based producer began trading on the New York Stock Exchange in 1993. In early 2017, the company was bought by Noble Energy Inc. for $2.7 billion.

Williams was involved in other endeavors beyond oil and gas. In 1984, he founded the first all-digital long distance company in Texas, ClayDesta Communications, named for himself and wife Modesta. He starred in his own commercials to save money.

He also had farming and ranching operations, and he taught for six years in the Texas A&M College of Business Administration.

In Texas and beyond, Williams was well known in Republican circles.

After defeating several GOP candidates who were vying to replace Texas Gov. Bill Clements in 1990, Williams secured the Republican nomination. He led in the polls for most of the campaign against Democrat Ann Richards, but eventually lost.

Texas Gov. Greg Abbott said, “Claytie Williams was a giant among Texans and will be remembered for his incredible business acumen and philanthropic acts. His impact on the Permian Basin will be lasting and his legacy will live on as a man who helped drive the American oil and gas boom — leading to our nation’s energy independence…”

Texas A&M’s Association of Former Students highlighted Williams’ contributions to the university, including a 1985 donation that led to naming the Alumni Center in his honor.

Williams is survived by his wife of 55 years, children and grandchildren.