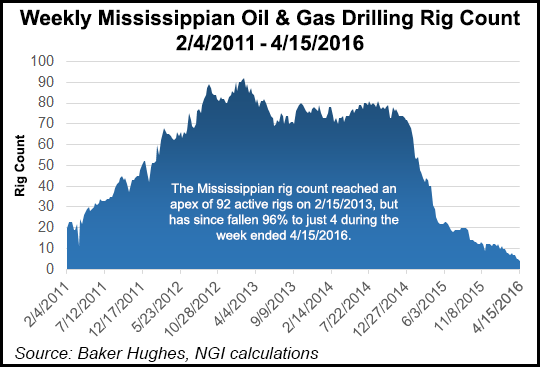 Net production from the central-northern Oklahoma assets averaged 12,800 boe/d in the first quarter, 70% weighted to natural gas and liquids, 30% to oil. Field-level cash flow, excluding overhead costs, was $8 million. At the end of 2015, proved reserves associated with the sale, set to be completed by the end of June, amounted to 11 million boe.

“This is another important step in executing on our plan to divest $2 billion to $3 billion of noncore assets across our portfolio during 2016,” Devon CEO Dave Hager said. “Proceeds will be used to further strengthen our investment-grade balance sheet. Additionally, this timely transaction accelerates Devon’s efforts to focus exclusively on its best-in-class resource plays in onshore North America.”

The Mississippian package is one of several that Devon had marketed for sale (see Shale Daily, Feb. 17). To cope with the prolonged slump, Devon had announced it would sell a bundle of onshore properties, as well as a half-stake in the Access Pipeline in Canada, which alone could fetch up to $800 million (see Shale Daily, Dec. 7, 2015).

Up to 80,000 boe/d of production has been identified for sale, which also includes the Carthage assets in a gassy area of East Texas, property in the Granite Wash and “select” Permian Basin assets in the Midland sub-basin.

The property being sold in Oklahoma covers close to 210,000 largely contiguous net acres which immediately offset White Star’s acreage and primarily are in Payne, Lincoln, Logan and Garfield counties. Most of the position from 555 horizontal wells, which are in Mississippian Lime and Woodford Shale reservoirs, are held by production.

The Mississippian Lime, still considered an emerging play with few prospectors, was drawing a lot of interest before oil prices plummeted in 2014. According to data compiled by NGI’s Shale Daily, the rig count in the play reached 92 active rigs by mid-February 2013, but earlier this month only four rigs were in operation.

The divestiture process for Devon’s remaining assets is ongoing. The Access Pipeline sale is expected soon, while efforts to monetize remaining U.S. upstream assets is progressing. Data rooms for upstream assets have been open since early March and bids are expected in the second quarter, with all of the sales expected to be completed by year’s end.

“With the acquisition of Devon’s Mississippi Lime and Woodford Shale assets, White Star has doubled its production and acreage footprint in Central Northern Oklahoma,” CEO Elliot Chambers said. “This acquisition will be significantly accretive to production, liquidity, reserves and leverage metrics, and will allow White Star to continue to leverage our core competency in low-cost Mississippian and Woodford resource development.

“Furthermore, upon signing, we executed hedges covering a substantial portion of acquired PDP [proved developed producing] production, providing stability to our cash flows while preserving upside. We are very appreciative of the continued support that our equity sponsors have shown for the business, and look forward to delivering on our disciplined operating plan and creating long-term value for all of our stakeholders.”

American Energy-Woodford was one of the affiliates formed by McClendon after he left Chesapeake Energy Corp. in 2013 (see Shale Daily, Jan. 29, 2014). The name change to White Star in late March was planned as it transitions to a standalone company, said financial sponsor The Energy and Minerals Group (EMG). White Star is expected to complete its transition by the end of June.

“This separation has been a strategic objective of our business since the company was founded in 2013, and we look forward to bringing it to fruition as quickly as possible during the second quarter,” Chambers said. “We appreciate the support and guidance that we have received from EMG, and the assistance the AELP platform has provided since our formation.”