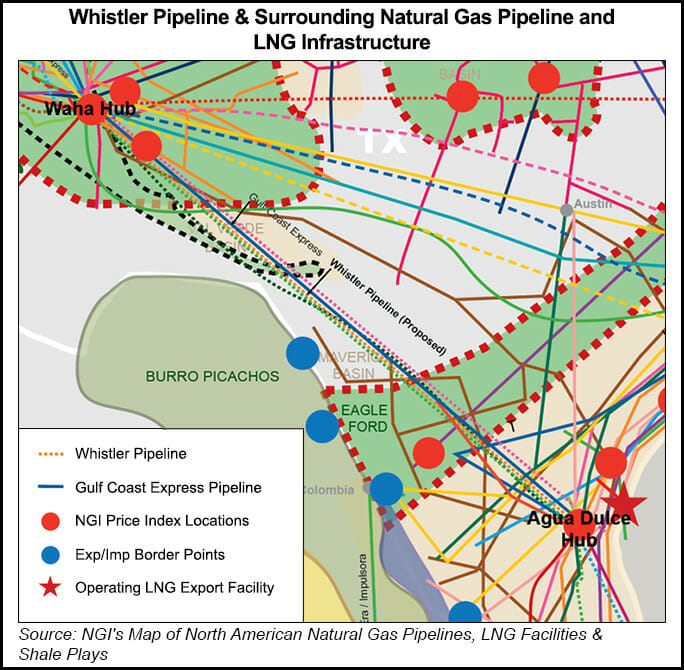 The Martin County Lateral, announced Thursday (Jan. 27), would lengthen the existing 36-inch diameter Midland lateral by about 35 miles and connect to multiple processing sites in the county. The extension is scheduled to be in service by the end of this year.

Whistler, owned by a consortium including MPLX LP, WhiteWater Midstream LLC and a joint venture between Stonepeak Partners and West Texas Gas Inc., began full commercial operations in July. The pipeline runs 450 miles from the Waha Hub in West Texas to Agua Dulce in the southern part of the state. From there, a 30-inch diameter pipeline runs 170 miles south to a termination point in Wharton County, southwest of Houston.

The Midland expansion comes as Permian natural gas production soared to record highs last month. In the Energy Information Administration’s (EIA) Drilling Productivity Report earlier this month, output is expected to soar to about 20 Bcf/d in February, up 122 MMcf/d from January.

The new lateral is set to go online during the peak winter season, improving connectivity to liquefied natural gas (LNG) export facilities on the Gulf Coast. U.S. LNG facilities have been running near capacity for much of the winter amid strong buying from Asia and Europe. New production units are expected to achieve substantial completion in the coming months, including Cheniere Energy Inc.’s sixth train at the Sabine Pass LNG export terminal.

The LNG developer also is eyeing a final investment decision this year on an expansion of the Corpus Christi facility. The project would add seven midscale liquefaction trains with maximum production capacity of 11.45 million metric tons/year (mmty). The Federal Energy Regulatory Commission also approved the construction of a 21-mile, 42-inch diameter pipeline for the facility and an LNG storage tank. Three liquefaction trains with a 15 mmty capacity are currently operating at the terminal.

Cheniere is seeking more time in bringing on the expansion, however, citing the impacts of Covid-19. It said it needs until mid-2027 to bring the project online.