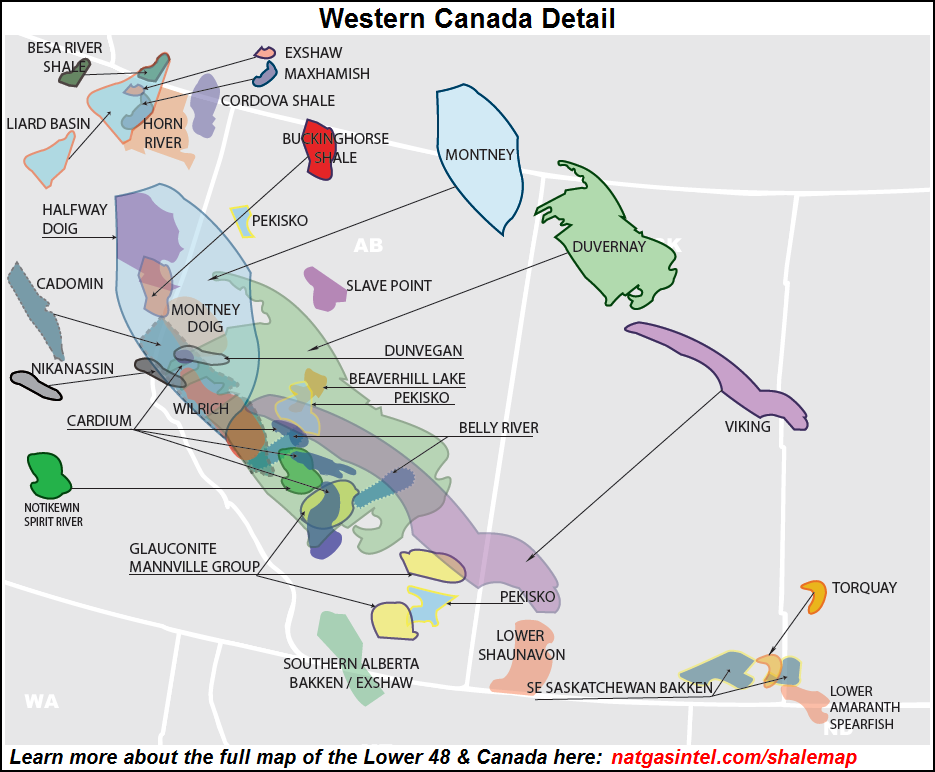 Seven Generations Energy Ltd. scored growth of 117% in oil production, 172% in gas liquids, 129% in gas and 20% in revenue. Painted Pony Petroleum Ltd. posted output gains of 41% in gas and 9% in liquids, plus its first oil production.

Both reported losses on their net income, but only because they are young development-stage firms engaged in high initial expenditures on wells and facilities. Both continue to invest in growth, with support from followings on the stock exchanges.

Both companies focus on a geological formation known as the Montney. The structure carpets a 130,000-square-kilometer (52,000-square-mile) region that straddles the border between northern Alberta and British Columbia. Seven Generations works in Alberta. Painted Pony is active in BC.

Although a remote frontier by standards of the urban population in Canada and the Lower 48 United States, the area is the most accessible shale or tight gas, liquids and oil zone on the northwestern fringe of the industry.

The region is within vigorous one-day drives on paved roads from the Alberta capital of Edmonton. Lying at varying depths, the thickness of the resource-soaked geological carpet is 100-300 meters (328-984 feet).

The formation spans a region where conventional vertical drilling, pipelines and processing plants have been well established since the 1950s. The territory includes Canada’s latest homestead farming frontier and three northern service and industrial centers: Grande Prairie in Alberta, and Dawson Creek and Fort St. John in BC. The Alaska Highway starts at Dawson Creek

The emerging growth employs Canadian adaptations of horizontal drilling and hydraulic fracturing. Thanks to the advanced technology, Painted Pony’s investor material calls the Montney “one of North America’s premier natural gas resource plays, larger in scope and with similar future potential as the Marcellus play of the northeastern U.S.” The firm adds that the new methods spell access to raw deposits that its experience indicates average 2 Bcf of hydrocarbons per square mile.

Processing and pipeline firms are building plants and laying conduits, reducing shortages of facilities that have fallen short of field capacity and at times limited producer sales and profits.

Denver-based Meritage Midstream Services is partnered with Canadian International Oil Corp., a Calgary-based firm owned by an array of private capital investment houses, on a pipeline system near Grande Prairie designed eventually to carry up to 225 MMcf/d of gas and 10,000 b/d of liquids.

The Canadian industry is voting with its drilling rigs in favor of continuing development. During the first 40 weeks of 2015, a scorecard kept by TD Securities Inc. showed nearly 500 horizontal well licenses made the Montney the most popular drilling target. Despite an industry-wide drop of 54%, the Montney total was off by only 5% compared to the same period of 2014.

The activity is making a start on developing astronomical potential documented in a 2013 federal-provincial resource appraisal by the B.C. Oil and Gas Commission, B.C. Ministry of Natural Gas Development, Alberta Energy Regulator and National Energy Board.

In the report’s conservative scenario for most likely “recoverable” or “marketable” reserves, the Montney was rated as holding 449 Tcf of natural gas, 14.9 billion bbl of liquid byproducts and 1.1 billion bbl of oil.

The figures are liable to grow as experience is gained in the deposit, added the appraisal by earth sciences arms of the government agencies. A high-case forecast pegs Montney supplies at 645 Tcf of gas, 21 billion bbl of NGLs and 2.4 billion bbl of oil.

Experience with horizontal drilling and fracking is sharply cutting costs. TransCanada’s Nova, in a facilities construction application to the NEB that draws on confidential industry information, says the full “supply cost” of putting Montney production into the market dropped by nearly 60% to C$2.69 (US$2.07) per MMBtu from C$6.45 (US$4.97)/MMBtu between 2006 and 2013.

Efficiency continues to improve. So far this year alone, Seven Generations reported an 8% reduction in well costs, with average drilling time down to 48-50 days from 60 and fracking operations pared to three to four days from a week.

The Montney is the first supply source earmarked for liquefied natural gas (LNG) export terminals proposed on the Pacific Coast of BC. The deposit’s most active developers include the Pacific Northwest LNG project led by Malaysian state energy conglomerate Petronas and its Progress Energy subsidiary in Calgary.

But high-priced overseas destinations are not the only places where Montney gas is forecast to fare well. The NEB’s current Canadian “deliverability” projection, released in June, rates the new northern BC and Alberta output as some of the lowest-cost gas in North America and becoming competitive with Marcellus Shale production.