Three natural gas pipeline projects that combined would carry up to 3.7 Bcf/d to Western Canada are racing toward regulatory approval, but if all three pass muster, it could be the worst possible outcome for shippers, an analysis indicates. 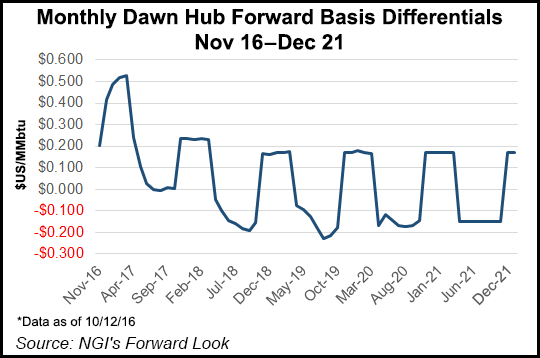 Sanford C. Bernstein & Co. LLC analysts Jean Ann Salisbury and Bob Brackett in an overview Wednesday highlighted the issues for Canada that face the three projects, two from Appalachia and one by TransCanada Corp., which seek to carry a total 3.7 Bcf/d of take-or-pay gas:

TransCanada on Thursday launched an open season to refill the Mainline, offering to cut tolls by as much as 47% (see Daily GPI, Oct. 13). Deliveries on the 57-year-old route from Alberta to Ontario, Quebec and border crossings into the United States lately have run at less than half of capacity.

Rover and Nexus alone “would supply 2 Bcf/d into Dawn/Ontario on a full-year take-or-pay basis, more than enough supply except for winter months,” Salisbury and Brackett said. “This would push most Canadian gas westward, over supplying the Midwest as the Pacific Northwest route is currently nearly full.”

However, all three projects have catalysts over the next two months, “and all three are incentivized to move forward.”

The Bernstein analysts said there is a “game theory element to the battle over Eastern Canada that could result in 3.7 Bcf/d of take-or-pay capacity to a 3 Bcf/d market the end of next year, with the likely effect of bringing down Dawn price $1.00 below Henry Hub, a losing scenario for all committed shippers.”

In game theory, popularized by the movie A Beautiful Mind, which traced economist John Nash’s groundbreaking research, strategists analyze competitive situations, where the outcome of a participant’s choice of action depends upon the actions of other participants.

Using game theory, Salisbury and Brackett said there are good reasons why each project should move forward.

Rover would succeed, they said, because Energy Transfer already has spent $1.6 billion of $4 billion earmarked. Its separate Revolution project is integrated with Rover but will not happen if Rover is canceled.

In theory, Nexus also could press forward. Even though it only has about two-thirds of its capacity committed, $250 million already has been spent by Spectra, and “shippers are utilities rather than E&Ps, with lower credit risk.”

TransCanada also may greenlight its project because existing take-or-pay contracts roll off by 2020. Gas then would shift to an interruptible basis “if they allow Rover/Nexus to take over the Eastern Canada market, likely leading to competitor projects for Montney exit.

“Montney producers will be limited in gas outlets without making TransCanada a viable takeaway route (which it is not at the current high interruptible rate).”

If all the regulatory approvals were to be received, the three projects would be in a race for space.

“We believe that each project thinks that by aggressively moving forward, it can ‘scare’ other projects off,” said the analysts. “But this might just result in all three happening, the worst outcome for shippers.”

If all three pipes were built take-or-pay, Bernstein estimates that pricing could move to the variable cost of moving southwestern Marcellus gas to the Montney.

“At current prices, this would be $1.40 wellhead cost, plus and estimated 25-cent fuel and interruptible transport to Dawn, or $1.65 (assuming that gathering and transport are sunk). This would be true for the majority of the year, with the potential to move to fully loaded pricing (close to Henry Hub) during a few winter months.” It would be all the more difficult “because this bad price would be on top of a firm transport fee on the respective pipelines, assumed at 7 cents/Mcf to $1.00/Mcf.”

Pick any two projects and it “should be manageable for basis — it is the third, in our view, which causes significant gas oversupply to the Ontario area.”

But the Bernstein analysts said the most likely scenario is a trio of projects under way. “This in our view would result in a Dawn price $1.00 below Henry Hub, a negative outcome for all shippers who paid 7 cents/Mcf and above to reach Dawn.”

So, what might happen? Energy Transfer COO Matthew S. Ramsey hinted during the 2Q2016 conference call that a partnership with Nexus is a possibility.

Energy Transfer has “been in discussions, certainly confidentially with Nexus, to determine whether or not it may make sense to do something together,” Ramsey said. “Right now, though, I think both partnerships believe theirs are going to be built. I think you’re seeing that happen on our side. And we’ll continue to be open-minded and look for opportunities to team up where it makes sense. But in the meantime…we’re on track. We haven’t changed anything on our timing. And we’re excited about bringing that project in service mid-2017.”

Energy Transfer’s Marshall S. McCrea, who is chief operating and commercial officer, said he wouldn’t characterize the discussions with Nexus principals as “negotiations,” but “I would say that we’ve been more in discussion that just make sense with two pipelines that cover kind of the same supply areas and also the same market, it just makes sense.” He told analysts during the conference call to “handicap ours at 100% that we’ll have this pipeline built.”

Spectra CEO Greg Ebel also was asked about Nexus during his company’s 2Q2016 conference call and whether the potential existed for the three pipe projects to flood the market.

“I don’t think we’ll flood that market; I mean it’s a massive market,” Ebel said. Some of the gas “could flow right through the Dawn Hub, and up the Dawn-Parkway system…We’re building a chunk there, and even further east.

“There’s nothing new about TransCanada’s offer” and “I think it will be interesting whether they get up any take on that…There is always some gas that’s going to come from Western Canada. So, I don’t see that as a big issue…I guess I would just remind folks of the interconnect, right?…A bunch of the gas will get dropped off along the way.”

Theoretically, Ebel said, if all of the interconnects were used, “there would be no gas from Nexus showing up at Dawn. I don’t expect that to be the case. So, I feel good that we’ve sized our pipe correctly. We’ve got the drop-offs along the way that are going to be utilized.

“Whether TransCanada is not as successful on that front, I don’t think that’s a heat issue from our perspective. We continue to be full steam ahead on that. I don’t know, maybe some others have some larger pipes that they’d rationalized, but from our perspective, I think we’ve sized this right.”

Ebel also was asked about whether FERC had or could recommend combining Rover with Nexus, but he said regulatory officials were looking at the two projects as standalones.

“I know a lot people look at Dawn, but remember our project is going arguably just a little bit west and then straight north; the competitive projects are out there going to Defiance and serving quite different markets.”