The co-tenancy legislation that passed during this year’s regular session in West Virginia is generally expected to aid natural gas development, but exactly how significant its impact will be remains unclear. 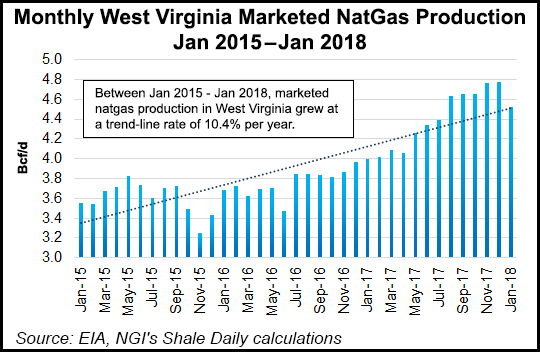 A long-awaited compromise aimed at helping shale gas producers develop more of their assets and, in particular, block-up more acreage for longer laterals, the co-tenancy bill was a top priority for West Virginia’s leading oil and gas trade groups. In West Virginia, mineral rights are severed from the surface. After more than 100 years of oil and gas development in the state, it’s not uncommon for producers to encounter mineral interests on a single property divided among dozens of family members, some of whom can be hard to track down or unwilling to allow development to occur.

In cases where there are more than seven mineral rights owners on a single tract of land, the new law would require a producer to obtain consent from 75% instead of the 100% as was previously required. Before the bill was signed by the governor in early March, West Virginia was the only oil and gas producing state that allowed a single minority interest owner to prevent others from allowing drilling. The bill takes effect in June.

Groups including the West Virginia Oil and Natural Gas Association had long maintained that the outdated mineral laws were putting the state at a competitive disadvantage. With co-tenancy on the books, industry representatives think it may attract additional investment, spur more job growth and provide more opportunities for mineral and surface owners.

“Our companies, the big companies that are drilling here, they said to us, ”get us co-tenancy, get us the ability to amass individual tracts of land with a super majority, not 100%, and we moved forward from there,” said executive director Charlie Burd of the West Virginia Independent Oil and Gas Association. “Co-tenancy absolutely moves the needle. It moves the needle in favor of producers’ need to accumulate more individual tracts to be able to get larger drilling units, not just larger units, but longer drilling units.

The industry failed for years to pass a more comprehensive pooling law for shallower formations in the state such as the Marcellus Shale over lawmakers’ concerns for property rights. It also dropped a controversial joint development proposal last year that would have allowed unconventional drilling to occur on land with older leases without modifying them.

Similar measures exist in nearby Ohio and Pennsylvania. Without them, it remains unclear exactly how much of an impact co-tenancy alone might have in the state. There are no reliable estimates for how much land the law would open up.

EQT Corp., for example, has said joint development or something similar is also needed in the state to modernize mineral laws. EQT plans to drill 168 wells in Pennsylvania and Ohio this year, but only 28 wells in West Virginia.

“The industry-related legislation that was recently passed in West Virginia does not support ongoing development of natural gas and is unlikely to help move the state forward in becoming an energy leader once again,” spokeswoman Natalie Cox told NGI’s Shale Daily of the co-tenancy bill. “In fact, West Virginia’s new natural gas legislation encourages EQT to plan its future investments elsewhere.”

West Virginia Royalty Owners Association President Tom Huber, whose group supported co-tenancy, is also skeptical about how significant the bill’s impact will be, but he agreed it would likely result in longer laterals and more production.

“I think we’ll see a pick up in drilling activity this year, but do we attribute that to passing co-tenancy or do we attribute that to rising prices? It’s hard to say, but I think it will be helpful,” he said. “I do think it will probably facilitate longer laterals, which is probably just as, if not more important than more wells. The longer the lateral, the less surface impact you have and the better rate of return you have on wells.”

If anything, the bill is at least likely to make development less cumbersome for producers and landowners alike. The legislation enjoyed widespread support in part because all co-tenants would be compensated for their proportionate share of the mineral interest they own, including minority unleased owners, holdouts and majority leased owners. Burd said it was “extremely common” for producers to encounter split estates where there can “literally be hundreds of mineral owners” for a single tract of land.

“I think the lion’s share of the work will be to negotiate or renegotiate existing leases now that you have a provision that allows for a super majority of 75% of landowners within a tract to speak for it,” he said. “This will open up additional tracts and allow producers to go back and pursue land or to pursue it anew.”

CNX Resources Corp. has a different view than EQT, and said the legislation helped keep the state on its “game board” in the next couple of years. CNX plans to drill 293 wells in Ohio, West Virginia and Pennsylvania between 2018 and 2020. Thirty wells are planned for the Marcellus in West Virginia, with five scheduled in 2018, 10 in 2019 and 15 in 2020.

Huber said producers also now have more options for resolving disputes among landowners. That could also mean that development occurs more quickly. Prior to the legislation, the legal recourse available in the state most often resulted in a lengthy partition action and public sale that favored producers, which have the means to buy property, Huber said.

“One company said they had over 200 partition acts filed last year, that kind of gives you an idea of the scale of the problem,” he added. “We’re hoping to see less of those and more use of co-tenancy to develop these units.”