Federal regulators have slapped ExxonMobil Corp. subsidiary XTO Energy Inc. with a $2.3 million fine for violations of the Clean Water Act that occurred at eight sites in West Virginia beginning in 2011. 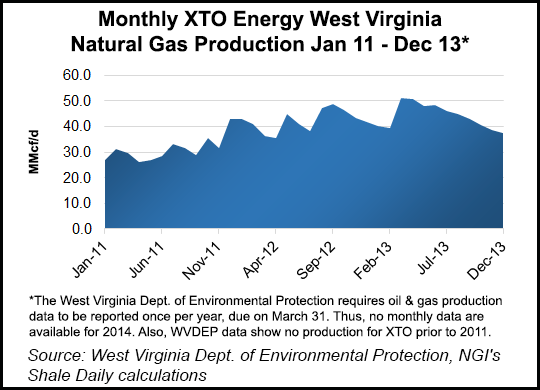 The U.S. Environmental Protection Agency (EPA) and the U.S. Department of Justice estimated that XTO would likely spend $3 million to restore those sites, where the company was drilling for natural gas in Harrison, Marion and Upshur counties. Along with the penalty and restoration costs, the settlement will also require XTO to implement a plan to comply with federal and state water protection laws at the company’s unconventional sites in West Virginia.

“American communities expect EPA and our state partners to make sure energy development is done responsibly,” said Cynthia Giles, assistant administrator of EPA’s Office of Enforcement and Compliance Assurance. “This case will help protect clean water in West Virginia and support a level playing field for energy developers that play by the rules.”

The federal government and the West Virginia Department of Environmental Protection (WVDEP) claim that the company harmed streams and discharged sand, dirt, rocks and other fill material into streams and wetlands without a federal permit in order to construct well pads, road crossings, impoundments and other facilities at each of the eight sites. WVDEP said the violations impacted more than 5,300 linear feet of stream and nearly four acres of wetlands.

The settlement will require XTO to fully restore those wetlands and streams wherever possible. The company will also be required to monitor progress at the restored sites.

“We have been and are continuing to work expeditiously on the restoration of impacted areas,” said company spokeswoman Suann Guthrie. “XTO voluntarily worked with the U.S. Department of Justice, U.S. Environmental Protection Agency and West Virginia Department of Environmental Protection in a cooperative and constructive manner concerning eight of its sites in West Virginia. Our priority is, and will remain, to protect the environment and wildlife in areas in which we operate.”

EPA said it discovered the violations through information provided by the state and through joint inspections with the Army Corps of Engineers. The agency also said XTO voluntarily disclosed violations at five of the eight sites in question after an internal audit. EPA issued compliance orders at all of the sites as early as 2011.

XTO is one of the nation’s largest holders of natural gas reserves. It operates in 16 states and has 11 million acres under leasehold across the country. In the Appalachian Basin, the company holds 800,000 acres, including 170,000 in West Virginia.

The EPA settlement is the second for the company in less than two years. In July 2013, it agreed with the EPA to pay $100,000 and spend roughly $20 million on a plan to improve wastewater management practices to resolve Clean Water Act violations in Pennsylvania (see Shale Daily, July 22, 2013).