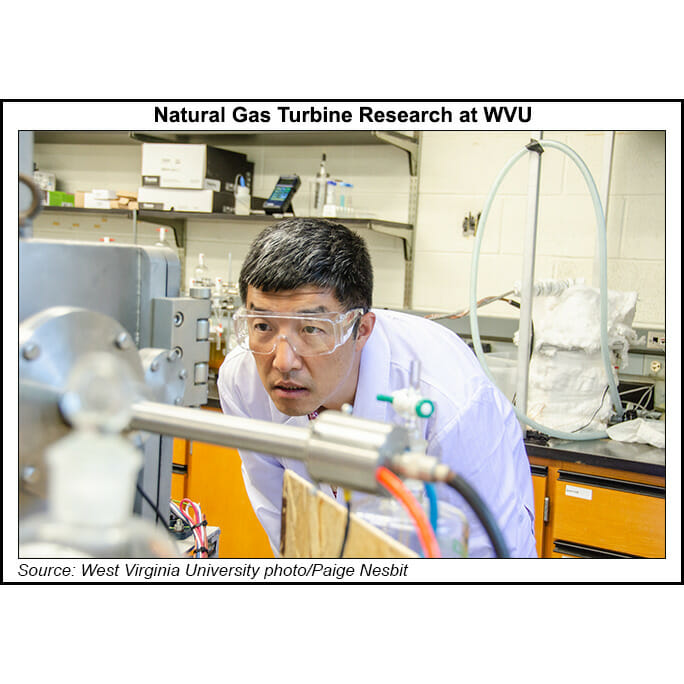 “In West Virginia, we have access to natural gas,” said WVU’s Xingbo Liu, mechanical and aerospace engineering professor. “We are sitting in one of three major gas fields, the Marcellus Shale area. Today, we simply burn that gas. But 95% or more of hydrogen today is made out of natural gas.”

Liu and his colleagues aim to develop coatings for turbine blades that would “withstand the extreme heat and corrosion of hydrogen combustion but work with the principles and technologies of existing natural gas turbines, primarily in power plants,” according to WVU.

A turbine that runs on hydrogen operates on the same principle as one powered by natural gas, but combustion characteristics differ between the two fuels, said Liu.

“Hydrogen combustion has two unique characteristics,” he said. “One is that the reaction produced is pure steam, which can be very corrosive. The other is the temperature. Combustion is really hot and combustion temperatures are sometimes even higher than the melting power of the metal component.”

The envisioned coatings would keep a turbine’s blades from corroding, oxidizing, or melting when hydrogen fuel is added to natural gas, researchers said.

Liu stressed that the process of blending hydrogen into natural gas for combustion is “still at the research and development stage. Although there have been demonstrations of hydrogen-fueled turbines, no one has run a turbine with hydrogen commercially.”

He added that several approaches exist to turn a turbine and generate power but that the most popular need heat.

“Today, in about two-thirds of turbines, we burn coal or we burn natural gas to turn a turbine, with coal contributing about 20% and natural gas about 40% of the total power we generate in the U.S.,” he said. “Less often, we use a nuclear reactor to heat water and generate steam.”

The institution said the achievement would enable “an energy revolution that’s more like an evolution, where clean power builds on existing resources – in this case, the state’s power generating plants and natural gas reserves.”

A $2 million grant from the U.S. Department of Energy, whose National Energy Technology Laboratory is participating in the research, is funding the bulk of the project, WVU said. Also collaborating is Praxair Surface Technologies Inc., a unit of the global industrial gases company Linde plc.