Republican leaders in the West Virginia legislature have formed an interim committee to explore more ways the state can attract and increase shale gas development. 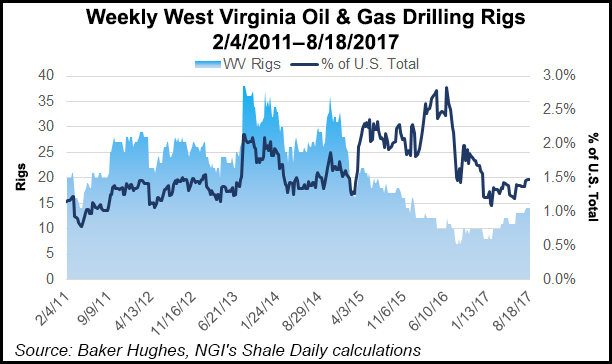 The Joint Committee on Natural Gas Development is scheduled to meet for the first time on Tuesday to better understand issues facing the industry and discuss ways to help solve them. A leading topic is likely to be efforts by shale drillers to get some kind of pooling law on the books that would make it easier to gather landowners into large tracts to better block-up acreage positions for horizontal drilling.

The oil and gas industry has tried for years to enact forced pooling with no success, as lawmakers have rejected legislation over property rights concerns. Last year, the industry opted instead to try for co-tenancy and joint development.

The 2016 legislation would have required a producer to obtain a simple majority agreement from mineral rights owners within a proposed tract rather than the current 100%. But the proposal would have prevented operators from forcing a co-tenant into a tract if the landowner owned at least 25% of the mineral rights. Under joint development, operators would be able to integrate older leases executed before the shale era into large tracts.

“It’s time to stop letting the minority hold back the will of the majority,” said West Virginia Oil and Natural Gas Association Executive Director Anne Blankenship. She welcomed the formation of the committee and said its goals provide an opportunity to advance the state’s economy.

The state Senate passed the co-tenancy/joint development bill earlier this year, but there wasn’t enough time before the regular session ended in April for the House to act on it.

Senate President Mitch Carmichael (R-Jackson County) and House Speaker Tim Armstead (R-Kanawha County) formed the committee to hear more from the industry about best practices, opportunities for economic expansion and more ways to compete for investment capital with Pennsylvania, Ohio and other producing basins across the country.

Mineral efficiency legislation in the state has been a top priority for years. West Virginia is one of only three producing states without a comprehensive pooling law.

“That would be a big improvement for West Virginia lateral lengths,” CEO Steven Schlotterbeck told financial analysts during the company’s second quarter earnings call last month. “The economics will make West Virginia more competitive in certain areas with our Pennsylvania opportunity.” EQT has been focused on consolidating acreage across Appalachia to increase lateral lengths and gain more efficiencies.

Eighteen House and Senate lawmakers are on the committee. The legislature meets in interim sessions before the regular session begins in January.