The latest version of a bill that would allow West Virginia’s natural gas producers to gather mineral owners into a large tract of land to better block-up acreage positions for horizontal drilling has been sent to the state Senate floor for consideration. 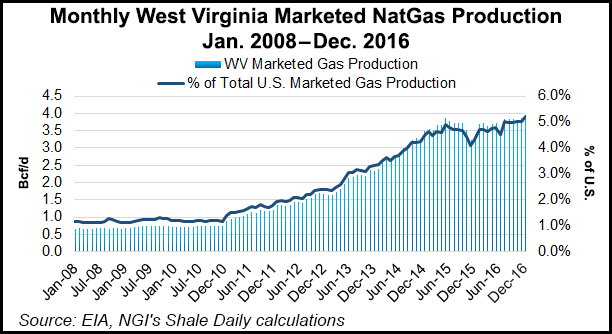 The Senate Judiciary Committee approved SB 576 after a late-night session on Thursday. The bill was again amended and reaches the full Senate after lawmakers worked through other versions and considered a different bill.

The industry-backed SB 244 was introduced in February. That bill would have required a producer to obtain a simple majority agreement from mineral rights owners within a proposed tract rather than the current 100%. The same would go for the latest version of SB 576, but operators couldn’t force a co-tenant into a tract if the landowner owns a fourth of the minerals or more. The bill keeps the joint development measure, which would allow gas from nearby properties where mineral rights owners have already agreed to drilling to be accessed.

In an effort to appease more stakeholders, Republican Judiciary Chairman Charles Trump introduced SB 576 earlier this month. It would also require drillers to obtain surface-use agreements from integrated landowners. Despite efforts to bring everyone to the table, the West Virginia Royalty Owners Association and the West Virginia Farm Bureau still oppose the bill.

The oil and gas industry remains supportive. Hundreds from the industry gathered at the Capitol in Charleston on Tuesday to support co-tenancy and joint development. Democratic Gov. Jim Justice again pledged his support for the measures at that event.

The West Virginia Oil and Natural Gas Association worked closely with lawmakers to craft the initial proposal. Under current law, forced pooling is allowed in the state for deep wells below the Marcellus, such as those targeting the Utica Shale, as well as shallow secondary oil recovery and coalbed methane wells, but not those targeting shallow formations, such as the Marcellus.

The industry was growing anxious over its latest attempt to get legislation on the books. While the legislature’s 60-day regular session adjourns on April 8, bills must leave committee by Monday to get three readings by March 29 before they leave the chamber of origin.

The bill’s path could still be rocky. Just hours before the 2015 regular session ended, the House of Delegates rejected a forced pooling bill after they failed to agree on several amendments added to the bill by state Senators. The changes resulted in a stalemate 49-49 vote, which defeated the legislation.