Rover Pipeline LLC has agreed to pay a $430,030 civil penalty for numerous sediment and erosion control violations during construction in West Virginia, according to a consent order released by the state’s Department of Environmental Protection (WVDEP). 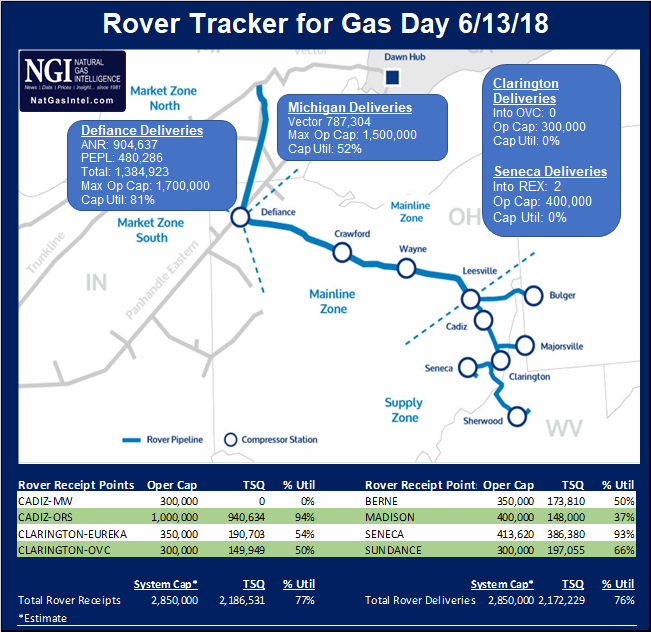 The order, dated May 15 and signed by a Rover official on June 1, details a series of water pollution violations found during inspections dating back to April 2017 and as recently as April of this year. The alleged violations generally relate to improper controls to prevent runoff during construction in Doddridge, Tyler and Wetzel counties, where the project’s Sherwood and CGT laterals are routed.

The Rover project’s water pollution violations prompted WVDEP to issue cease and desist orders last July and in March that temporarily halted construction in the state, adding to a list of regulatory run-ins for the massive greenfield Appalachian expansion.

Rover, a 713-mile, 3.25 Bcf/d natural gas pipeline designed to transport supply gathered from West Virginia, Ohio and Pennsylvania to markets in the Midwest, Gulf Coast and Canada, increased its daily throughput this month after receiving FERC authorization to place into service several remaining sections of its second and final phase of construction.

But FERC has yet to approve four supply laterals, including the completed Burgettstown and Majorsville lines, potentially limiting supply into the now fully operational mainline.

“Construction on the Rover Pipeline is essentially complete, and the line has received approval from FERC to transport the full 3.25 Bcf/d,” Rover spokeswoman Alexis Daniel told Shale Daily via email. “We anticipate bringing on the four remaining lateral pipelines shortly, and we remain focused on restoring the entire right-of-way, which has always been our commitment to the landowners. We continue to work with the WVDEP on the terms of the consent order.”

Genscape Inc. analyst Colette Breshears said in a note to clients last month that construction on Rover’s CGT and Sherwood laterals appeared to be largely complete but that landslides may have caused delays.

“Continued earth movement/slips along” the remaining laterals could impact Federal Energy Regulatory Commission approval of those lines, “which will impact the addition of supply paths to Rover,” Breshears said at the time.

NGI’s daily Rover Tracker on Wednesday showed the pipeline flowing about 2.1 Bcf/d through its Mainline Zone, including about 1.4 Bcf/d delivered into the ANR and Panhandle Eastern pipelines at Defiance, OH, and just under 800 MMcf/d delivered into Michigan to the Vector Pipeline.