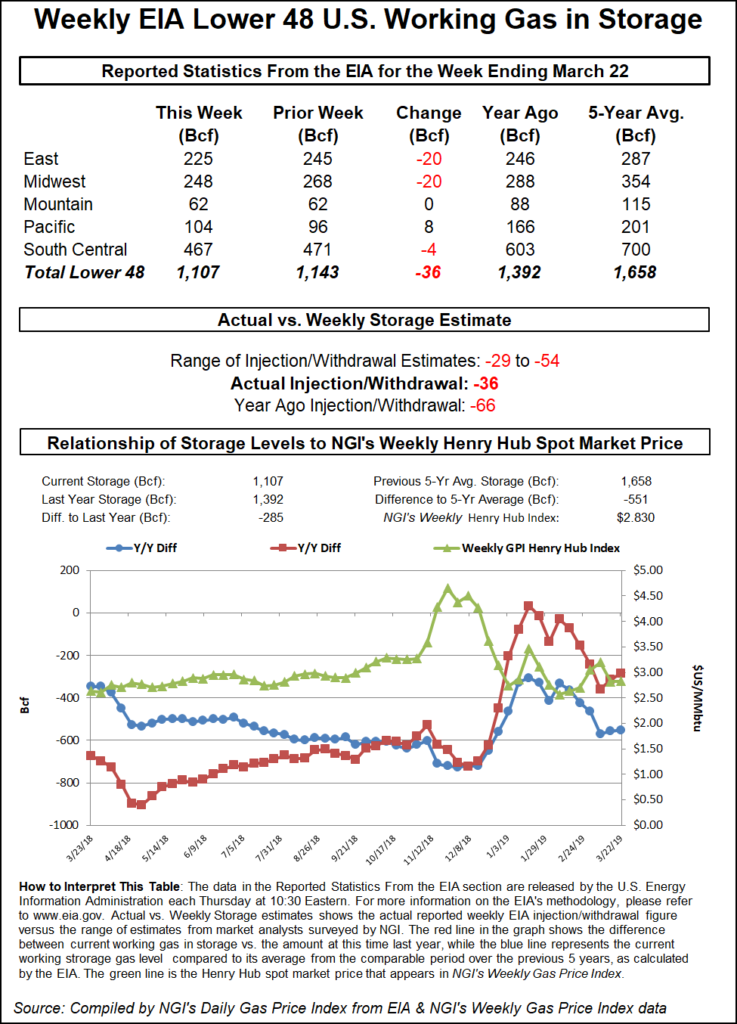 The Energy Information Administration’s (EIA) weekly storage report showed a 36 Bcf withdrawal from U.S. stocks that was in line with estimates, producing a muted response from futures.

The 36 Bcf figure for the week ended March 22 compares to a five-year average withdrawal of 41 Bcf and a 66 Bcf pull recorded in the year-ago period. With temperatures rapidly warming and forecasts showing minimal lingering cold shots heading into April, estimates suggest this week’s report could also mark the end of the withdrawal season.

Prior to the report, a Bloomberg survey showed estimates ranging from a withdrawal of 29 Bcf to a 54 Bcf pull. Intercontinental Exchange futures had pointed to a 32 Bcf withdrawal. NGI’s storage model had predicted a withdrawal of 40 Bcf.

Bespoke Weather Services had called for a 34 Bcf withdrawal and viewed Thursday’s report as “neutral overall.”

“It was quite loose compared to last week and the five-year average,” but prices prior to the report were already lower week/week to “reflect that loosening,” Bespoke said. “…Modestly supportive overnight weather may prevent prices from really bleeding off, but cash back under $2.65, loose daily balances, and expectations of a warming April should keep prices under pressure even after this neutral EIA print.”

By region, the East and Midwest both saw net withdrawals of 20 Bcf for the week. The Pacific region injected 8 Bcf overall, while Mountain region stocks finished flat week/week.

Chat participants on energy-focused social media platform Enelyst had been expecting the unexpected from the South Central region this week, but changes to stocks there offered few surprises based on comments following Thursday’s report. EIA recorded a net 4 Bcf withdrawal in the South Central, with a 7 Bcf withdrawal from nonsalt offsetting a 2 Bcf injection into salt.

Looking at the latest supply picture, following revisions to pipeline data, Genscape Inc. Lower 48 production estimates for both Sunday and Tuesday have climbed above the 88 Bcf/d mark, the firm told clients Thursday. That marks the first time production has topped 88 Bcf/d since Dec. 22.

“Production this week is averaging more than 1.2 Bcf/d above the month-to-date average,” Genscape senior natural gas analyst Rick Margolin said. “In addition to the previously mentioned growth out of the Permian, increases are fed by more than 0.4 Bcf/d of growth from the rest of Texas excluding the Permian, the restoration from freeze-offs in the Denver-Julesburg and Bakken, and conclusion of maintenance offshore Gulf of Mexico.”

Genscape is still forecasting more than 6.7 Bcf/d of summer-on-summer production growth in 2019.

Booming production has left the market flush with supply and flattened out the shape of the traditional seasonal price curves. But growth in power burns has helped demand keep pace, and 2019 is shaping up to be another record-breaking year for gas demand in the electric sector, according to analyst Dan Grunwald of Morningstar Commodities Research.

“With over 7,000 MW of generation capacity added in 2018 and another 6,500 MW of summer capacity being added this year before summer, we are set for another record-breaking demand season,” Grunwald said. “The added gas capacity and loss of coal in the supply stack should see 2019 demand surpass 2018. If the total added plant capacity ran at 100% this summer, it would add just over 1 Bcf/d. Realistically that will add 0.5-0.75 Bcf/d outside of a very temperate summer.”

Recent Nymex futures prices show the 2019 summer months trading at a slight discount compared to the same months in 2018 and 2017, according to the analyst.

“That leaves slight upside potential in a strong demand summer with greater sector reliance on natural gas given coal retirements,” Grunwald said. “Looking at the winter months, last year saw some volatility with tight storage levels, but after a strong start to winter things settled back down. This year the winter curve has flattened again.

“…Storage levels should be bolstered again this spring, but like last year strong summer power demand could see us entering winter again at some of the lowest levels in years.”

The historically low natural gas spot prices in West Texas this week dropped even further Thursday. At this point, calling the pricing dynamics in West Texas unprecedented in the North American natural gas market might qualify as an understatement.

Amid a glut of associated gas supply and a cap on takeaway capacity, the crude-driven economics in the Permian Basin — the most active U.S. onshore play by an order of magnitude — have flipped the region’s natural gas market on its head.

At more than one location, “sellers” in the region paid as much as $2.500/MMBtu to offload their gas Thursday. Waha averaged negative $1.945 on the day. Transwestern averaged negative $2.125. The region-wide average finished the day at negative $1.625, more than a dollar deeper in the hole than the previous record established just a day earlier.

Heading into Thursday’s trading, analysts didn’t appear to be betting on Permian prices finding a bottom.

Recent pipeline maintenance, including ongoing events restricting flows on El Paso Natural Gas, has played a role in the negative pricing in West Texas this week, but it’s not the “sole driving force.” The combination of production growth and pipeline takeaway capacity that has “hit the wall” create a dynamic that could drive prices “much lower” compared to even Wednesday’s record-setting depths, RBN Energy LLC analyst Jason Ferguson wrote in a note to clients early Thursday.

“Our latest numbers from the weekly NATGAS Permian report indicate that gas production reached a new high of more than 9.9 Bcf/d in the last several days, a level that represents an increase of more than 2 Bcf/d versus March 2018 average production,” Ferguson wrote. “What’s more, production has achieved these new highs despite recent reductions in capital spending by Permian producers, with current levels up 0.5 Bcf/d from the December 2018 average.

“The clincher is that even as gas volumes have continued to increase, pipeline takeaway capacity in the basin has hit the wall; the last brownfield pipeline expansion is now in-service and already running full, and new capacity, in the form of Kinder Morgan’s 2 Bcf/d Gulf Coast Express, isn’t due online for about another six months,” the analyst said. “Adding insult to injury is the fact that gas pipeline capacity just across the Texas-Mexico border — an ideal delivery market for Permian producers — continues to sit underutilized as Mexico’s downstream pipeline build-out faces ongoing delays.”

Spot gas prices have collapsed before for producing areas in the Marcellus Shale and the Rockies, hitting near-zero in the not-so-distant past. But the liquids-rich Permian “does not follow the economic relationships displayed” in dry-gas basins, Ferguson noted.

“When prices fell below cash variable costs in those basins, producers usually shut in gas until new takeaway arrived,” he said. “The Permian is a different animal entirely, with most of the region driven by crude oil economics, a reality that suggests negatively priced gas is merely an added cost that is deducted from a well’s overall profitability. For most Permian oil wells, gas prices would have to fall much further than we have already seen to cause producers to shut in the well.”

This is the key reason why “we think it likely that the worst pricing may still be ahead and wouldn’t be surprised if Waha trades even further into negative territory than it did this week.”

“In our Forward Look data, which go back to October 2012, Waha gas has never been priced this low,” said NGI markets analyst Nate Harrison, “and prompt month pricing there has been in a steady state of decline for more than six years now.”

Elsewhere in the Lower 48, spot prices — reflecting deals traded Thursday for delivery through the end of the month — were mixed. Most of the Gulf Coast and Midwest saw only small adjustments, with a number of regional averages finishing within a nickel of even.

Short-range forecasts Thursday called for warmer-than-normal temperatures along both the West and East coasts heading into the weekend.

“Along the East Coast, a broad area of high pressure will maintain relatively tranquil weather through Friday,” the National Weather Service said. “On Saturday, the low pressure system in the middle of the country will begin to shift east, and precipitation chances should begin to increase toward the East Coast.

“Temperatures will gradually warm up on Friday and Saturday, with highs by Saturday 10-15 degrees above average in the Interstate-95 Northeast corridor,” the forecaster said. “The West Coast will likewise see increasing broad high pressure, with moderating temperatures into the weekend.”