Though spot natural gas prices started to fall from record highs at the end of last week, losses continued in the final week of February as much milder weather emerged. NGI’s Weekly Spot Gas National Avg., which covered the trading period from Feb. 22-25, plummeted $30.940 week/week to $2.740. 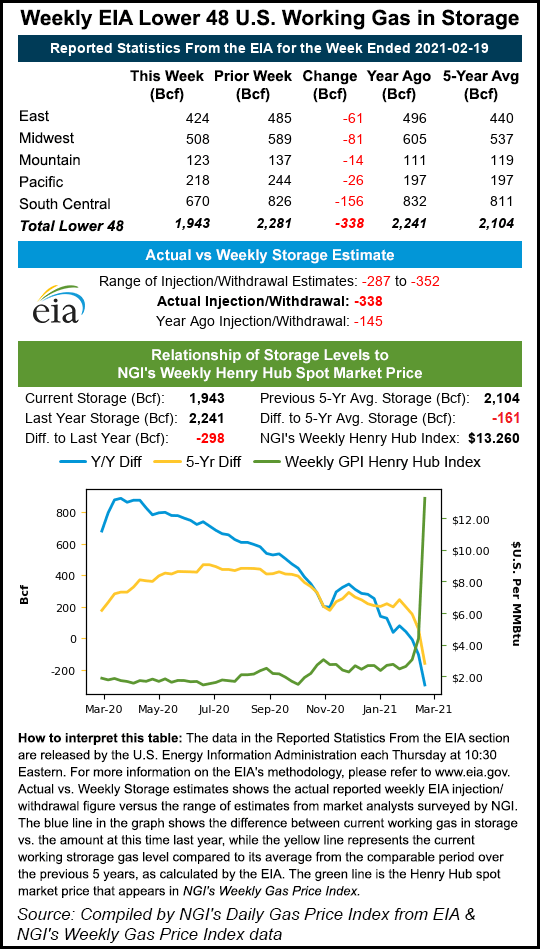 Days after temperatures plunged into the single digits as far south as the Gulf Coast, daytime temperatures this week soared to near 80 and likely led some to flip the heat to A/C to stay cool. Elsewhere, cool conditions blanketed the northern and central United States late in the week, though high pressure was forecast to build across the central, southern, and eastern parts of the country this weekend for a return to light national demand.

The quick return to a more seasonal weather pattern led to dramatic decreases in the Midcontinent, where prices spiked as high as $1,250.000 during the prolonged Arctic freeze. The highest prices recorded in the region during the Feb. 22-25 period was $2.800 at Northern Natural Ventura, which dropped $51.765 on the week to average $2.610. OGT, which surged into the thousands last week, plunged $536.165 to average $2.520.

Pricing hubs across the country also continued to retreat, though losses were more tempered. In the Northeast, Transco Zone 6 NY was down $7.790 week/week to average $2.565.

The March contract rolled off the board Wednesday at a mere $2.854. It settled the previous Wednesday at $3.219. The new April prompt month, meanwhile, closed the week at $2.771.

With weather models pointing to a mostly mild pattern for March, and production recovering much quicker than most market observers had expected, there’s been little for bulls to hang their hat on this week. While liquefied natural gas (LNG) demand has returned, feed gas volumes have yet to reach their pre-storm highs, throwing a wet blanket on what little demand there is.

It’s a safe bet that most analysts were looking to the latest government storage data to make some waves along the Nymex curve this week, but even a 300-plus Bcf withdrawal failed to garner much attention. The Energy Information Administration (EIA) 338 Bcf draw was on the higher side of expectations, but it came in short of the record 359 Bcf withdrawal recorded in January 2018.

“Those who grew up in the early 1990s wearing ‘No Fear’ clothing will know ‘second place is the first loser,’ said Tudor, Pickering, Holt & Co. (TPH) analysts. That adage appeared to apply on Thursday as the second largest draw in history was greeted with apathy by the natural gas market.

The 338 Bcf draw became the “second member of the 300 club” and dropped storage from a 5% surplus to a 6% deficit versus the 5-year average, according to TPH. Nevertheless, the price needle barely moved after the EIA report was released.

Participating in The Desk’s online energy chat Enelyst, commodity analyst Stephen Schork said, “Can someone please remind traders on the Nymex that the EIA report came out?”

Despite the lack of excitement following the EIA report, TPH noted that “interesting” regional dynamics are starting to emerge. Analysts said a massive South Central draw of 138 Bcf puts balances at 17% below the five-year average. For comparison, East levels are only 2% lower, and the Pacific region is at a 13% surplus.

“With U.S. Gulf Coast LNG demand expected to be strong this summer, it bodes well for Henry Hub, but we do see basis risk rising in both the Pacific and Northeast markets,” said the TPH team. “We remain firmly in the bullish camp on summer gas pricing, but we don’t expect the next storage inflection point until the middle of 2Q2021, when a lack of supply growth coupled with rising cooling demand starts to drive an expanding deficit versus the five-year.”

For the next two months or so, TPH analysts said it’s possible that a lack of catalysts allow prices to drift lower and, if so, they would use the opportunity to add long exposure into the summer and an undersupplied winter, which could see the return of $4.00 gas.”

Spot gas, which traded Friday for gas delivery on Monday, was higher as a cold front was forecast to push toward the Midwest, Great Lakes, Ohio Valley and Northeast after a mild weekend. The chilly conditions were expected to linger through Tuesday, with temperatures forecast to fall below zero in some areas for a quick bump in demand.

As the cold blast was expected to be quick moving, price gains did not pack nearly the same punch as they did during the prolonged Arctic event last month. Chicago Citygate spot gas climbed only 5.5 cents to $2.585 for gas delivery on Monday. Similar increases were seen in the Midcontinent and throughout Louisiana.