It was a rough week for the bulls as NGI‘s National Spot Gas Average fell a hefty 17 cents from the previous week to $3.45. All regions of the country were down by double digits and only a handful of individual points in the Northeast managed to make it to the positive side of the trading ledger. 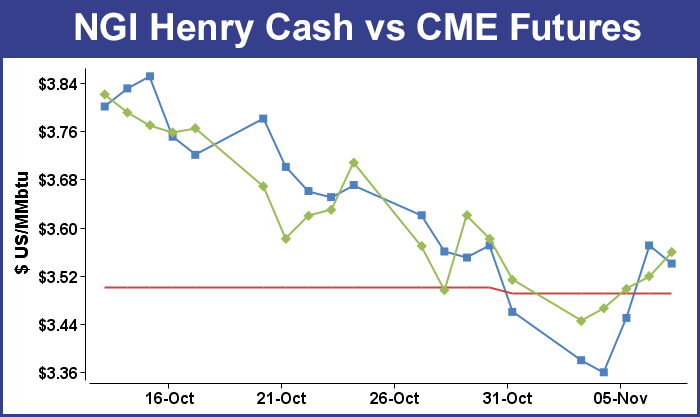 Regionally the Northeast at $3.33, down 20 cents, now sits as the lowest cost producer, undercutting the historically isolated Midcontinent and Rocky Mountain basins.

Of the actively traded market points, the Northeast was also home to the locations with the week’s greatest gains and losses. Tennessee Zone 4 Marcellus jumped 57 cents to average $2.70 and Tennessee Zone 5 200 L plunged 68 cents to $3.51.

Both the Rocky Mountains and Midcontinent were down by 19 cents to $3.43 and California shed 18 cents to average $3.67.

South Texas was lower by 14 cents to $3.38 and South Louisiana was the most resilient region dropping 13 cents to $3.42.

In Friday’s trading weekend and Monday deliveries of physical gas skidded 8 cents on average nationally with East and Northeast points the hardest hit and only a handful of points in positive territory. Most locations were off by a nickel to a dime. Futures put the finishing touches on four straight gains, and at the close of trading December was up 4.0 cents to $3.559 and January had gained 4.1 cents to $3.616.

Futures traders saw fairly quiet trading and were anticipating the arrival of cold air. “I know it’s supposed to be cold here [this] week with highs of 45 and 46, but I don’t know if it is sustainable,” said a New York floor trader. “I’m looking for a trading range between $3.50 and $3.70, but there are a lot of traders sitting on the sidelines waiting for sustained cold weather. I’m not sure that’s going to happen.”

Analysts see the weather dynamic as somewhat fluid. “Our interpretation of various forecasts is that weather trends across the eastern half of the U.S. will be cooler than previously expected next week but could be followed by another warming trend beyond mid-month,” said Jim Ritterbusch of Ritterbusch and Associates in a morning note to clients. “In other words, one week’s cool-down could easily be offset by above-normal temps the following week, with the month of November still shaping up to be significantly milder than usual. As a result, some further contraction in the year over year supply deficit could be seen with the shortfall approaching negligible levels by early next month when serious cold weather sets in. But while weather will continue to be the primary driver of price, we still see a record production factor as slowing storage withdrawals through much of the heavy usage cycle.”

Tim Evans of Citi Futures Perspective calculates a year-on-five-year surplus of 49 Bcf as of Nov. 22 and said, “While clearly not a bullish scenario, this certainly looks far more constructive than how things looked a week ago, or even on Tuesday. There’s some ongoing risk that the temperature outlook shifts again onto a more bearish track, but we see the current projection as strong enough to support a further test of the upside.”

The Energy Information Administration reported an increase in gas storage of 35 Bcf on Thursday for the week ending Nov. 1, about what the market was expecting. Following the release, some traders were anticipating that next week would show the first withdrawals, but others anticipated further builds. “I think it should be next week. Last year was the first one [withdrawal],” said a New York floor trader. The trader characterized some estimates of as much as two more weeks of builds as bearish.

“This is the time we start withdrawals, and if we have two more weeks of builds, that’s bearish,” he said.

In its weekly industry summary of storage estimates John Sodergreen, editor of Energy Metro Desk, said “We’re anticipating three more builds [including this week] this season before the switch moves to the draw side.”

Midwest buyers Friday were still in the process of topping off storage. “We are still working on our storage. We had shut it down for a few weeks to complete our LNG offload system, and we started injecting again about a week ago,” said a Midwest utility buyer. “We’ve got to start thinking about winter, and it looks like there is cold forecast for next week.

“We’ll probably be buying on the spot market because we don’t want to be pulling on our storage just yet. It’s a little early in the season to start overruns and things like that. We’ll take our allowable out of storage and pick up extra if we have to. Our loads are a little greater than the number of degree days would indicate, but we’ll get by.”

At Northeast points, prices for weekend and Monday deliveries plunged as forecasters called for load-killing rain and overcast conditions. The National Weather Service in southeast Massachusetts said showers would linger into the evening hours [Friday] as high pressure was expected to build in from the west into Saturday. Low pressure was expected to move over northern New England later in the weekend. Another cold front may bring a round of showers to the area early next week.

Rockies points were also soft. Gas on CIG skidded 4 cents to $3.31, and at the Cheyenne Hub packages came in at $3.37, down 8 cents. On Northwest Pipeline Wyoming, weekend and Monday gas slipped 9 cents to $3.34. Deliveries to Opal were seen 6 cents lower at $3.38.

Forecasters were calling for a hefty surge of cold into the Midwest. Commodity Weather Group in its Friday morning six- to 10-day outlook showed below-normal temperatures running in a northeast-southwest direction and bordered by northern Michigan, northern Illinois, and North Texas. “This week’s six-10 day cold sneak attack surprise story is now starting to progress forward into the end of the one- to five-day range, and this is leading to some moderation of the six-10 composite map, especially for the Midwest and Plains,” said Matt Rogers, president of the firm Friday.

“The brunt of the Midwest cold push is around days five-six (Tuesday-Wednesday) with highs only in the 30s for Chicago and lows in the low 20s. Highs for New York City by the middle of next week are only in the 40s. Texas is not spared either, with lows in the 30s in Dallas next Wednesday and Thursday now. Return warming is then faster late next week for the Midwest and then East, but the guidance is mostly favoring a more variable pattern situation in the 11-15 day rather than a sustained, bigger warm one as thought earlier this week. Changes in high-latitude patterns are giving mixed signals for late November.”

Storage inventories now stand at 3,814 Bcf and are 112 Bcf less than last year’s record-setting build and 57 Bcf above the 5-year average. In the East Region 10 Bcf was injected and in the West Region 3 Bcf was added. Inventories in the Producing Region increased by 22 Bcf.