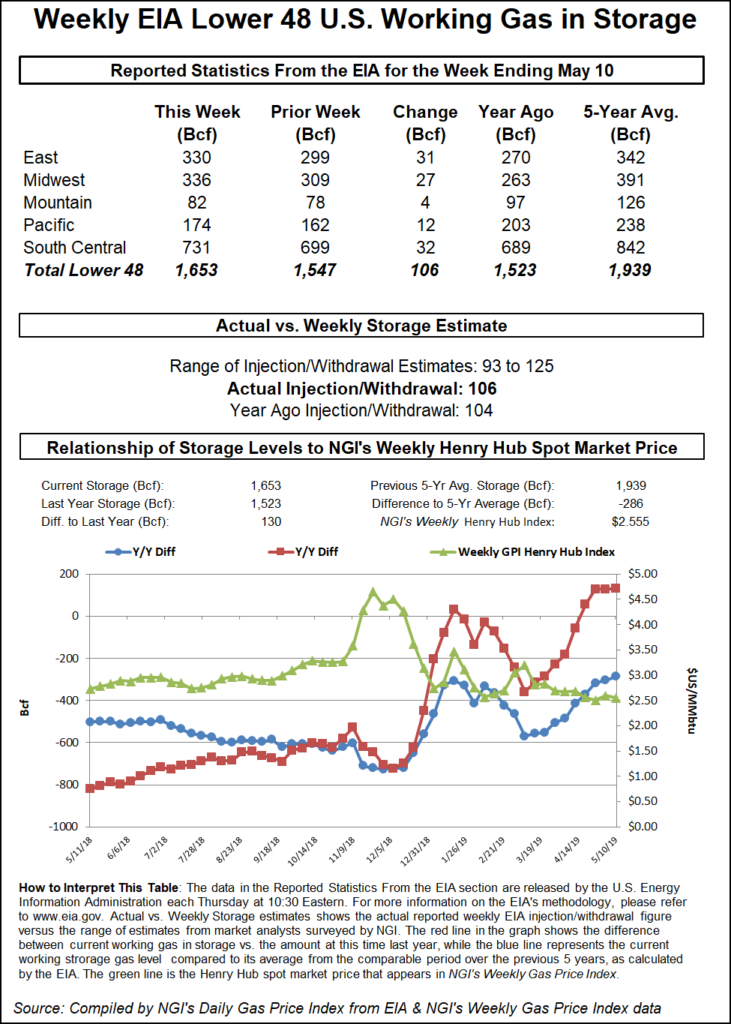 A possible precursor to stronger heat expected from Texas to the Mid-Atlantic during the week ahead, some warm-to-hot conditions supported higher prices in the Southeast during the week. Transco Zone 4 added 7.0 cents to $2.555.

West Texas and southeastern New Mexico prices had their day-to-day ups and downs during the week, including the return of negative pricing at several locations. While wide negative basis differentials continued to point to constraints in the region, weekly prices strengthened for most locations. Waha picked up 22.5 cents to average 44.0 cents.

Chilly and stormy conditions in the West during the week couldn’t provide an impetus for higher prices in the Rockies. Kern River eased 4.0 cents to $2.010. In California, meanwhile, prices were mixed. PG&E Citygate and SoCal Citygate held steady, while SoCal Border Avg. slid 11.5 cents to $1.995.

The natural gas futures market spun its wheels Friday, with traders stuck mulling the prospect of summer demand growth on the one hand and recent bearish storage builds on the other. The June Nymex futures contract eased 0.8 cents to $2.631 after going as high as $2.660 and as low as $2.616. Week/week the front month contract picked up 1.2 cents after settling at $2.619 the previous Friday.

Prices were up and down during the week, with the market stuck between bullish weather trends and bearish fundamentals, according to Bespoke Weather Services.

The weather picture has turned “increasingly bullish,” showing “a lot more heat in the back half of May than what we were looking at in the forecasts a week ago,” Bespoke said. However, a “bearish fundamental picture” has weighed on prices. Thursday’s Energy Information Administration (EIA) storage report “did confirm some tightening of balances, but they still remain too loose to allow for prices to continue moving up and taking out the $2.65-2.66 resistance level.”

The upcoming week could provide a “very important measure of the fundamentals side given the heat that is on the way,” the firm added. “We do suspect that the burns will show improvement as the heat arrives,” but sentiment remained neutral as of Friday “because the market has been showing that it wants to see confirmation in the data before putting together a rally from these levels.”

The Energy Information Administration (EIA) reported an on-target 106 Bcf inection for the week ended May 10, versus a 104 Bcf build recorded in the year-ago period and a five-year average 89 Bcf injection.

Estimates prior to the report had EIA unveiling a low-triple-digit build in line with the actual number. Major surveys had pointed to a 104 Bcf build, with predictions ranging from 93 Bcf to 125 Bcf. Intercontinental Exchange EIA Financial Weekly Index futures settled Wednesday at 105 Bcf, while NGI’s model predicted a 102 Bcf injection.

By region, the South Central posted the largest weekly injection at 32 Bcf, including 25 Bcf into nonsalt and 6 Bcf into salt stocks. The East injected 31 Bcf, while the Midwest injected 27 Bcf. In the Pacific, EIA recorded a 12 Bcf build, while 4 Bcf was refilled in the Mountain region for the week.

“On a weather-adjusted basis, the market is currently around 2 Bcf/d oversupplied, down from a 3 Bcf/d oversupply last week,” according to analysts with Tudor, Pickering, Holt & Co. (TPH). They attributed the tighter balances to liquefied natural gas (LNG) and Mexico export volumes that “continue to ramp up; current flows show combined exports at 10.6 Bcf/d, up from a trailing 30-day average of 9.4 Bcf/d.

“We expect the market to move toward balance over the summer as LNG projects ramp up, and Mexican exports are expected to get a lift in late June from the Sur de Texas pipeline,” the TPH team said. “LNG demand will be key to watch over the next couple weeks, as flow data shows Cameron LNG began shipping its first gas this week, beginning a ramp to around 0.6 Bcf/d of feed gas demand.”

Meanwhile, the spring nuclear outage season is “winding down rapidly,” including 1.95 GW of capacity restored over the past week, according to Genscape Inc. senior natural gas analyst Rick Margolin.

“Outages peaked in early April. Current levels on outage are now down to their lowest point since the end of February, with additional reductions slated to occur in the next several days,” Margolin said. “The volume of capacity on outage this spring peaked on April 1 at 22.45 GW. By the start of May there was 16.48 GW on outage. Current capacity on outage stands at 10.3 GW.”

Coinciding with calls for the mercury to rise in the Lower 48’s southeastern quadrant, prices gained modestly across much of East and South Texas, Louisiana and Southeast Friday. Transco Zone 4 picked up 4.5 cents to $2.590.

On Friday NatGasWeather was looking for the southern Great Lakes, Ohio Valley and Northeast regions to see “mostly comfortable” temperatures in the high 60s to low 80s over the next several days, resulting in light demand.

“However, temperatures will be very warm to hot from Texas to the Mid-Atlantic coast as high pressure dominates, with highs of upper 80s to lower 90s,” the forecaster said. “The West and Plains will see numerous weather systems track through with heavy showers and thunderstorms but with mixed results as the Southwest cools into the comfortable 70s and 80s.”

Maintenance events could have implications for flows on the ANR Pipeline during the upcoming week, according to Genscape.

Elsewhere on the ANR system, the pipeline has “further restricted flow through Jena Southbound by up to 253 MMcf/d through gas day May 24, increasing the duration” of an unplanned maintenance event that began earlier this month, according to Ferrara.

“Due to continued unplanned maintenance at Jena and planned maintenance at the Delhi compressor stations, ANR is continuing to restrict capacity through Jena Southbound to 1,105 MMcf/d through Sunday” and is expected to further restrict capacity to 960 MMcf/d from Monday through Friday, the analyst said. “Over the past 14 days, flows through Jena Southbound have averaged 1,162 MMcf/d and maxed at 1,213 MMcf/d.”

With buyers unphased by calls for some chilly temperatures in the western United States in the coming days, prices declined throughout the Rockies and California heading into the weekend, with California locations posting the heaviest losses.

“A series of cold and energetic upper-level troughs will continue to bring active weather from the northeastern Pacific into the western U.S.,” the National Weather Service said Friday. “This will allow unsettled weather and very chilly temperatures to continue for much of the West into the northern Plains. In fact, the higher elevations of the Intermountain West will be cold enough to see accumulating snow, while valley locations will see a chilly rain.

“High temperatures in some locations will be as much as 20-30 degrees below normal for Friday and Saturday, and this very cool and unsettled pattern should last generally through the weekend across the West.”

Expecting temperatures in its territory in the low 60s, Southern California Gas was calling for system demand to drop over the weekend. SoCal Citygate tumbled 36.5 cents to $2.450. SoCal Border Avg. slipped 34.5 cents to $1.500.

Further upstream, West Texas prices came under significant pressure Friday, with several locations dropping into the negatives. Waha slid 35 cents to average minus 12 cents, including trades as cheap as minus 50.0 cents on the day.

NGI has recorded negative spot price trades in West Texas on only a handful of occasions over the past 30 days. Prior to Friday, the last negative transaction occurred May 6, when a deal was struck at minus 25.0 cents, Daily GPI historical data show.