Hotter weather couldn’t prevent an ultimate fall in spot gas prices for the June 1-5 period, with markets across the Lower 48 falling week/week. Losses were fairly small, however, and NGI’s Weekly Spot Gas National Avg. was down only 5.0 cents to $1.610. 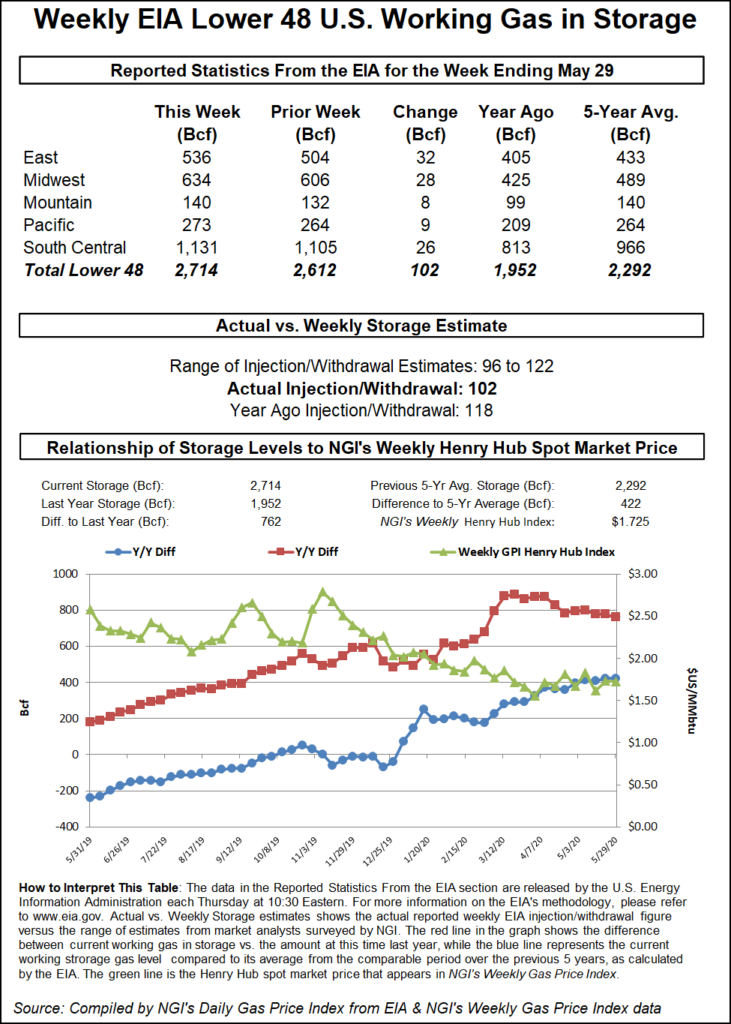 Temperatures out West remained well above-average throughout the week, and heat extended across Texas, the South and Southeast as well. Even northern states finally started seeing warmer weather, with highs in Washington, DC, soaring into the low 90s.

Although power burns were strong and initially lifted cash markets early in the week, those gains failed to hold and by Friday, it was a sea of red across the country.

Markets throughout the Southeast posted similar declines of up to 11.5 cents, while much smaller losses were seen in Appalachia.

The Northeast posted the only gains, although most were very modest at only a few pennies week/week.

After six weeks of large swings, natural gas futures had a steadier foot during the first week of June even as liquefied natural gas (LNG) demand sank to fresh lows. Whether it was because much of the expected LNG demand loss had already been priced into the market, or because natural gas production is projected to bottom out this month, traders appeared content with the recent trading range.

The July Nymex gas futures contract swung in a narrow band of only 12 cents throughout the June 1-5 week, with the last four sessions resulting in day/day changes of less than a nickel. The prompt month capped the week at $1.782, up just eight-tenths of a cent from Monday’s close.

“The market wants to see how the balance shakes out after this decline in LNG, as we need more from the demand side to make up for that decline,” said Bespoke Weather Services. “In the end, we have stated that the question regarding containment will likely not be settled for awhile yet, keeping us inside the same $1.60s to $1.90s prompt-month trading range. If LNG can bounce back, that would be bullish, but that could be difficult given the low price environment globally.”

Talk of potential U.S. cancellations had been brewing since last year as new capacity and a mild winter left the global market awash in supply, but the domestic market managed to stay afloat even when Covid-19 first emerged. That changed over the past week, however, as feed gas deliveries to U.S. terminals plunged to 3.88 Bcf/d in a sign of the more than 30 U.S. LNG cancellations that have been reported for June. Although volumes were back at around 5.0 Bcf/d on Friday, more downside risk looms as cancellations are seen continuing through October.

Elevated European storage inventory levels continue to pressure National Balancing Point and Title Transfer Facility prices, and the Japan Korea Marker benchmark is only marginally higher than Henry Hub at the front of the curve. This dynamic could be a headwind for several more months with stronger cooling demand in both downstream markets providing some potential relief, according to Mobius Risk Group.

“Coal-to-gas switching across Europe could also begin to reduce the downward pressure, but in reality, it will likely be winter heating demand in Europe and Asia that ultimately leads to a more opportune environment for upside in the domestic natural gas market,” the Houston-based firm said.

Meanwhile, the decline in exports means even more gas could wind up in Lower 48 storage. On Thursday, the Energy Information Administration (EIA) reported that inventories rose by 102 Bcf, lifting stocks to 2,714 Bcf, 762 Bcf above year-ago levels and 422 Bcf above the five-year average.

The EIA figure was the fourth triple-digit build in the last five weeks and came in lighter than consensus, though most analysts said more tightening was needed to prevent a blowing out of storage by October.

The EIA’s next report should shed a digit as record seasonal heat through several regions of the United States resulted in daily power burn pushing 36 Bcf during the week, levels not typically seen until July, according to Tudor, Pickering, Holt & Co. (TPH). However, it’s also possible the market hasn’t seen the last of the 100-plus Bcf prints as the following report could flirt with 100 Bcf if cool forecasts hold and LNG drops back to the low 4.0s Bcf/d, the TPH team said.

Indeed, just as heat was starting to build in areas outside of the western United States, weather models are showing an upper-level trough passing through the Midwest and East in the next couple of weeks that may keep a lid on temperatures in the higher demand regions of the East. Although Bespoke does not expect the cooler weather to hold given signs of a move toward more of a La Niña base state, “the ends of the model runs are not yet indicating the return of heat just yet, something we expect to see as we head into the final third of June.”

Until then, the market also is closely monitoring Cristobal, which on Friday regained Tropical Storm strength as it headed toward a projected landfall Sunday in Louisiana. Bespoke said the storm “is essentially just a big rainmaker for parts of the South” that would lead to lower demand risks in this region into early next week, but LNG terminals all along the coast indicated they were ready to implement their storm procedures if needed.

Spot gas prices were lower across the Lower 48 despite continued heat in Texas, the South and the Southeast, as well as on the West Coast. Even the eastern United States was forecast to see a continuation of the warm conditions that moved over the region in recent days.

However, cooler weather was forecast to emerge in the Northwest over the weekend, and all eyes were on Cristobal, which was seen lowering demand due to the heavy winds and rain it would likely bring to the Gulf Coast.

Spot gas prices across the Southeast fell up to 10.0 cents on Friday, while several markets in Appalachia posted slightly bigger losses. Tenn Zone 4 200L tumbled 12.0 cents to $1.440 for the three-day delivery.

In the Northeast, Tenn Zone 6 200L plunged a more substantial 29.5 cents to $1.445, while prices around New York were only about a dime lower day/day.