A springtime cocktail of cooling demand and heating demand led to a mix of natural gas spot price moves during the week ended May 10; the NGI Weekly Spot Gas National Avg. added 1.5 cents to $2.180/MMBtu. 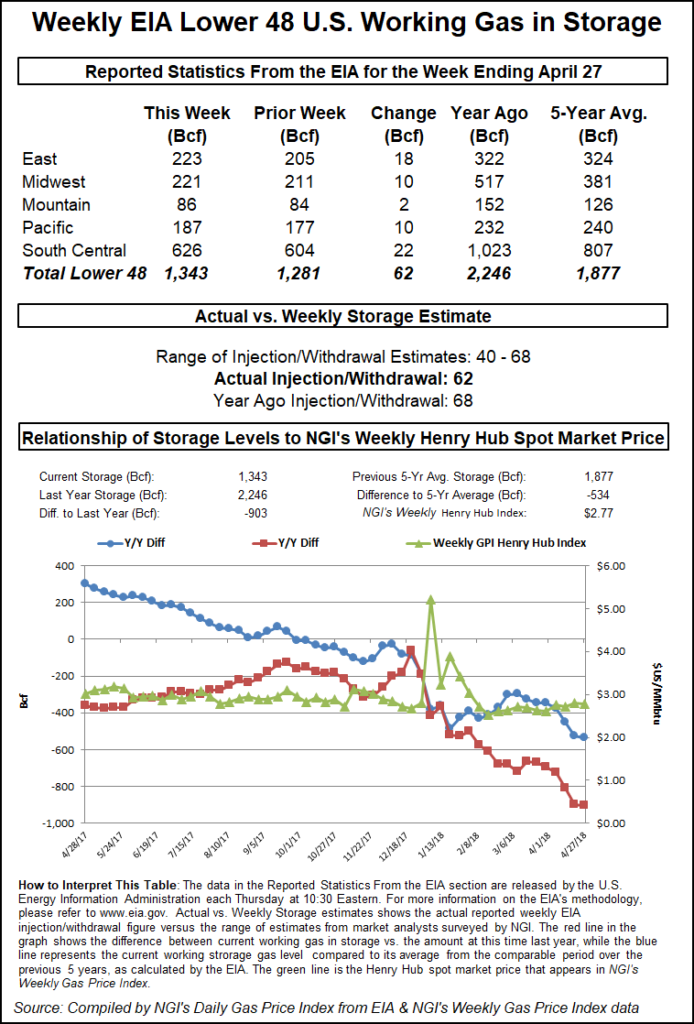 Forecasts during the week showed a stormy pattern and chilly temperatures for the northern and central United States, including snow in some of the coldest areas. The chilly weather appeared to support higher prices in the Rockies for the week. Cheyenne Hub added 7.5 cents to $2.030.

On the flip side, forecasts also showed temperatures climbing well into cooling degree day territory in some areas, particularly in the Southeast. But that wasn’t enough to stir significant increases for weekly spot prices in the region. Transco Zone 4 slid 4.5 cents to $2.485, while Florida Gas Zone 3 gave up 3.0 cents to $2.540.

In the futures market, the latest forecasts showed sustained summer heat could still be weeks away, but that didn’t discourage natural gas bulls from driving front month prices higher Friday. The June Nymex futures contract finished the week on a high note, rallying 2.4 cents to settle at $2.619 after trading as high as $2.647 and as low as $2.574. Week/week the front month contract gained 5.2 cents after settling at $2.567 the previous Friday.

From a fundamentals standpoint, Bespoke Weather Services viewed Friday’s rally as “a little peculiar.” The firm highlighted “daily balance data that is as loose as it has been since early April, with weak weather-adjusted burns being the main culprit.”

“On the bullish side, potentially, there is the risk for above normal heat in the eastern half of the nation in week two, and we do still think that legitimate heat will tighten up balances, but we have more than a week to go before any heat arrives on the scene to either confirm or reject this hypothesis,” Bespoke said Friday.

“The second part of that heat equation is that we do not feel any heat will be sustained or ”lock in’ like what we saw a year ago, so we may see the ends of models show a tame pattern setting up for what is right now week three.”

As of Friday, the firm said it saw greater risks for a reversal of Friday’s gains early in the upcoming week than for prices to continue higher.

On Thursday the EIA reported an above-average 85 Bcf weekly injection into U.S. natural gas stocks that confirmed the market’s expectations, resulting in a fairly muted response from futures prices.

The 85 Bcf injection for the week ended May 3 matches the 85 Bcf build recorded for the year-ago period but is larger than the 72 Bcf five-year average.

By region, the South Central saw the largest build for the week at 33 Bcf, including 24 Bcf into nonsalt and 10 Bcf into salt stocks. The East injected 20 Bcf, while the Midwest injected 19 Bcf on the week. Further west, the Mountain region posted a net 3 Bcf weekly injection, while the Pacific injected 10 Bcf, according to EIA.

Analysts with Tudor, Pickering, Holt & Co. said the market was about 3 Bcf/d oversupplied on a weather-adjusted basis, tighter compared to a 5 Bcf/d oversupply for much of April, which corresponds with maintenance-related reductions in liquefied natural gas (LNG) feed gas demand.

“Right now it seems like the gas market can’t catch a break, just as LNG volumes have returned (currently 5.7 Bcf/d), weather has become uncooperative,” the TPH analysts said. Preliminary data for the upcoming week’s EIA report showed “a roughly 4 Bcf/d decrease in residential/commercial demand, but with no corresponding increase in power generation we’re forecasting a return to triple-digit builds versus norms of 90 Bcf.”

Deals for weekend and Monday delivery saw discounts throughout California and the Rockies Friday.

Southern California Gas (SoCalGas) was anticipating the typical weekend dropoff in demand on its system, expected to go from a little over 2.1 million Dth/d on Friday to around 1.9 million Dth/d over the weekend. Composite weighted average temperatures in the SoCalGas territory were expected to hover in the mid- to upper-60s through Sunday.

A five-day maintenance event on the Westcoast Energy Inc. system was set to kick off over the weekend, potentially cutting or forcing the reroute of around 500 MMcf/d of flows interconnecting with TC Alberta, according to Genscape analyst Joe Bernardi.

“Most of the gas can be rerouted via another interconnect between the two pipes,” Bernardi said. “Westcoast is performing a station outage affecting its Sunset compressor, which will be limited to zero operating capacity through Wednesday (May 15). In the past 30 days, this interconnect has delivered an average of 509 MMcf/d from Westcoast to TC Alberta.”

Similar maintenance events in the past have put downward pressure on Westcoast Station 2 spot prices as volumes backed up in British Columbia, according to Bernardi.

“However, cut flows at Sunset are usually accommodated by increased deliveries from Westcoast to Alberta at their separate interconnect at Gordondale,” the analyst said. “For example, during a maintenance event in September 2018, which limited Sunset delivery capacity to zero (versus a previous 30-day average of 350 MMcf/d), deliveries at Gordondale increased by over 250 MMcf/d versus their 30-day baseline.”

Meanwhile, NatGasWeather was calling for “numerous weather systems” to deliver heavy showers and thunderstorms over the weekend for much of the country. The forecaster was expecting lows in the 30s and 40s over the central and northern United States, with warmer temperatures further south, including highs in the 80s to lower 90s in Florida and the Southeast.

The National Weather Service (NWS) on Friday called for heavy rain and thunderstorms across the Mississippi, Tennessee and Ohio valleys, as well as the Southeast and Mid-Atlantic, through Sunday evening.

“Another, faster, low pressure system” was expected to “move into the Northern Plains from Saskatchewan” Friday night, “bringing rain and thunderstorms to the region as well as to the Upper Mississippi Valley through Sunday morning,” the NWS said.

The recent stormy spring weather has had an impact on natural gas production coming out of the Haynesville Shale, according to Genscape.

“Haynesville production has taken a dive in the past few days due to severe weather and power outages near the Texas border, after a long period of maintenance that initially cut production,” Genscape analyst Nicole McMurrer said Friday. “Production scrapes in the area have fallen around 400 MMcf/d since the storms began moving through the area.”

Tetco declared a force majeure Thursday due to an unplanned outage at its Danville Compressor Station (CS) in Danville, KY.

“Southbound capacity on its 30-inch diameter line was restricted from its Owingsville CS to its Tompkinsville CS, causing flows to be restricted by as much as 345 MMcf/d compared to the 14-day max,” according to Genscape analyst Josh Garcia. “Flows had been trending upwards as Gulf Coast demand ramps up. This outage will add pressure for M2-to-Gulf Coast spreads to widen and for M2 production to shut in.”

As of Friday, Tetco had not provided an estimated date for a return to service.

“While efforts to repair the station to full capacity are underway, the estimated time of restoration is unclear at this time,” the operator told shippers.