Customary volatility in the Northeast – punctuated by steep drops on a Tuesday defined by a lull in weather-driven demand – pushed weekly cash prices lower despite an active storm period. 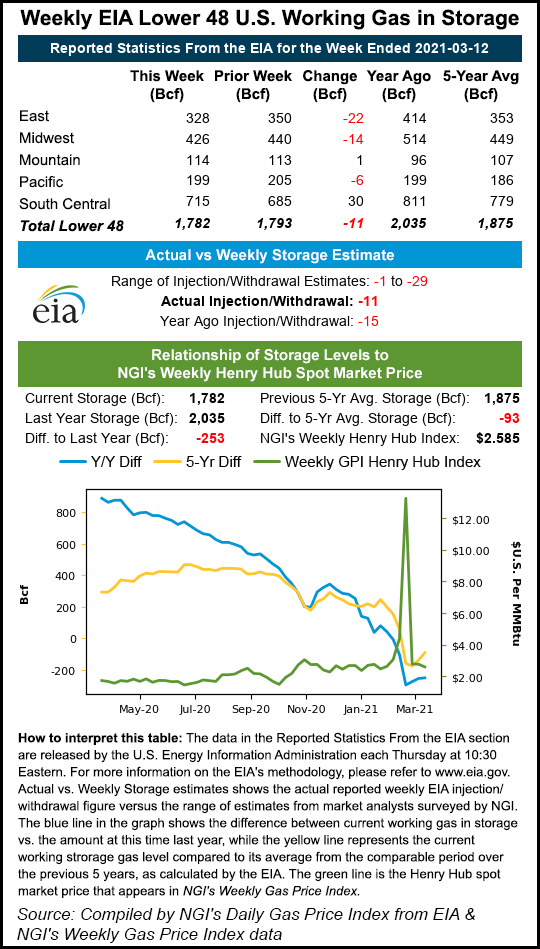 A heavy dose of winter dropped several inches of snow across the Rocky Mountain region and the northern Plains to start the week, and as that system pushed east on Monday, prices in the Northeast climbed to start the trading week. But as the storm conditions faded and temperatures climbed, demand declined and prices plummeted in the region.

Next-day prices at several key Northeast hubs sunk nearly $2.000 on Tuesday, dragging down the national average for the day by 14.5 cents. Combined with national declines on three of the other four trading days, as well as further drops in the Northeast on Friday, it was more than enough to drive weekly prices into the red.

Nationally, bouts of rain over swaths of the nation’s midsection at midweek followed the blasts of snow earlier in the week. However, even where precipitation was heavy, temperatures were mostly comfortable, with highs ranging from the 30s to 50s in northern regions and higher in the South, minimizing demand.

Temperatures are expected to quickly warm in the week ahead. Highs are forecast to range from the 50s and 60s in the Upper Midwest and Northeast to 70s and 80s in the South. Forecasters said heating needs would further dissipate, leaving catalysts for cash prices lacking.

LNG feed gas volumes were healthy throughout the week, hanging near or above 11 Bcf/d – near record levels amid continued Asian demand for U.S. exports and increasing need for American gas in the European Union (EU).

EU inventories began rapidly drawing down in recent weeks, a development that could propel U.S. exporters well into the summer cooling season. As of mid-March, there was 361 TWh of natural gas in storage in the EU, representing only a third of the region’s capacity, according to NGI data. That is nearly 270 TWh below the year-earlier level.

“While gas supply is likely to see a boost from associated gas production because of strong oil prices, it is also likely to be offset by increased demand, particularly from LNG,” said Connor McLean, an energy analyst at BTU Analytics. “Forward spreads to Europe and Asia continue to remain wide enough to support high utilization of U.S. facilities throughout the summer.”

Futures faltered on Wednesday ahead of the latest U.S. Energy Information Administration (EIA) inventory report. Markets tumbled again on Thursday after the government data was released.

EIA reported a withdrawal of 11 Bcf from storage for the week ended March 12 – short of market expectations for a pull in the range of 16-22 Bcf and well off the five-year average withdrawal of 59 Bcf for the comparable week.

It was the third-consecutive EIA print to come in shy of analysts’ median estimates. The government reported a withdrawal of 52 Bcf for the week ended March 5, missing projections for a pull in the 70s Bcf. That followed a 98 Bcf withdrawal for the week ended Feb. 26 that compared with estimates for a draw in the 130s-140s Bcf.

On Friday, however, the market shifted its focus back to LNG momentum.

The April Nymex contract settled at $2.535/MMBtu to close the week’s trading on Friday, up 5.4 cents day/day but still off 2.5% from the prior week’s finish.

Spot gas prices fell on Friday for weekend and Monday gas delivery as comfortable temperatures spread across much of the country and heating needs dwindled. NGI’s Spot Gas National Avg. fell 16.0 cents on the day to $2.270.

A majority of hubs in every region posted declines, led lower by steep drops in the Northeast.

Weather-driven demand may do little for cash prices in coming days, given the expectations for continued mild weather.

Meanwhile, even though the Atlantic hurricane season is months away, the World Meteorological Organization’s (WMO) hurricane committee said it decided at a recent meeting that the Greek alphabet would not be used in the future because “it creates a distraction” from storm warnings and “is potentially confusing.”

The change followed a record 2020 hurricane season that was so active the WMO’s 21-name rotating list was exhausted and the Greek alphabet was used for only the second time (the first was in 2005). Officials said since the Greek names are so rarely needed, when they are used people in many countries find their use confusing.

“Impacts from a single storm can affect multiple countries, so it is critical we have a plan, coordinate our efforts” – and make changes as needed, said Ken Graham, who chairs the WMO hurricane committee and is also U.S. National Hurricane Center Director.

The hurricane committee agreed to a new supplemental list of Atlantic tropical cyclone names in lieu of using the Greek Alphabet.

The WMO also said it retired Dorian (2019), Laura, Eta and Iota (2020) from the rotating lists of Atlantic tropical cyclone names because of the death and destruction they caused. In total, WMO said, 93 names have now been retired from the Atlantic basin list since 1953, when storms began to be named under the current system.