Though demand remains at a seasonal lull, weekly natural gas prices got a jolt from Hurricane Delta, which prompted a big chunk of supply to be shut-in ahead of its Friday landfall. Driven by solid gains along the Gulf Coast, NGI’s Weekly Spot Gas National Avg. jumped 20.5 cents to $1.515. 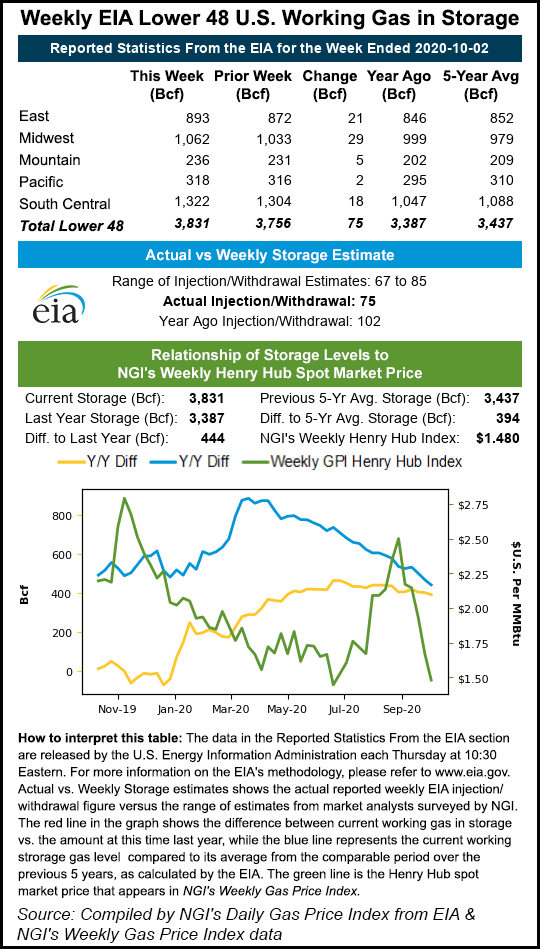 Benchmark Henry Hub prices languished for much of the week, but then experienced more than its fair share of volatility during Friday’s trading session. Deals were transacted in a wide 44.0-cent range before averaging $2.265, up a massive 78.5 cents from Thursday.

With some cool weather penetrating the Midwest, Chicago Citygate prices were up 14.5 cents on the week for a $1.405 average. Algonquin Citygate climbed 21.0 cents to average $1.185.

Over in the Rockies, some maintenance on Canada’s Westcoast Transmission, which wrapped up Thursday, caused some volatility downstream at Northwest Sumas. Prices jumped $1.160 week/week to average $3.170.

The November Nymex gas contract opened Monday’s session at $2.455 and reached a $2.727 intraday high that day, a level that held throughout most of the week. On Friday, however, the prompt month surged to $2.821 before finishing the session several cents below that level at $2.741.

Friday’s rally at the front of the curve occurred despite quite a few mixed signals playing out in the market. At the forefront was Delta, a Category 2 storm that at presstime was nearing landfall near Lake Charles, LA.

Delta is the second storm to hit the area in two months. Hurricane Laura crashed ashore on Aug. 27, causing widespread power outages that included a month-long outage at Cameron LNG. Although Cameron did not sustain significant damage from Laura, the terminal had to wait a month for local utility Entergy Corp. to restore power. Much of the transmission infrastructure throughout the region had to be rebuilt.

Like it did during Laura, Sempra Energy opted to shut down Cameron’s operations ahead of Delta, though it kept a “ride-out” team in place at the terminal this time around. Cheniere Energy Inc. also had a ride-out team at its Sabine Pass facility, but it planned to continue operations.

By Friday, NGI data showed feed gas deliveries to U.S. export terminals tumbling back down to 6.5 Bcf, off nearly 1 Bcf day/day and not from where they started the week.

“This year’s hurricane season has come at a critical time for the natural gas market,” said EBW Analytics Group.

Excess supply that began building late last year, coupled with the unprecedented demand loss caused by the Covid-19 pandemic, has resulted in a far more rapid rebuilding of storage inventories. Hefty surpluses versus historical levels have raised fears of a storage availability squeeze this fall, according to EBW.

“If Hurricane Laura had not struck the Gulf Coast, this surplus would have started eroding in September,” said the firm. Since Laura made landfall, however, “the disruption caused by the storm has required cancellation or deferral of at least 100-125 Bcf of LNG exports and shut-in considerable industrial demand along the Gulf Coast.”

Without this lost demand, concerns regarding storage would not have been as intense, according to EBW. Furthermore, Henry Hub cash prices would not have sunk to the lowest level in years, dragging the forward curve down with it.

As Bespoke Weather Services pointed out, even temporary decreases “can still make things very dicey,” particularly in the South Central region, where storage space “is simply running out.”

On Thursday, the Energy Information Administration (EIA) said that South Central stocks climbed by 18 Bcf to 1,322 Bcf. This included an 8 Bcf injection into salt facilities, which rose to 366 Bcf. Salt capacity is estimated to be around 400 Bcf.

The Schork Group said this summer’s injections in the South Central have been 51% higher than last summer’s and the market has replaced 149% of the gas that was delivered last winter. Over the last five weeks alone, utilities in the northern latitudes have “repaid 35 Bcf of the 41 Bcf of gas” that they “borrowed through the dog days.”

Looking ahead to the next EIA, The Schork Group expects the injection to come in lower than historical levels, “likely residue from a sharp rebound in LNG exports following delays related to tropical weather events.” The following EIA also should come in low, although analysts said it’s important to keep in mind that “extant production shut-ins related to Hurricane Delta will skew the next two reports.”

EBW said if the damage caused by Delta is limited, the total amount injected into storage in November could fall to less than 150 Bcf. This would cause the storage surplus to plummet and gas prices to soar. “If operations at Cameron continue to be disrupted, though, the forward curve could remain under pressure until full operation is restored.”

Meanwhile, nearly all of the production in the Gulf of Mexico (GOM) was shut-in ahead of the storm. On Friday, the Bureau of Safety and Environmental Enforcement said as of 11:30 a.m. CT around 62.17% of the natural gas and 91.55% of the oil produced in the GOM was shut-in. Based on data from offshore operator reports, personnel were evacuated about 43% of the manned platforms. Personnel also had been evacuated from seven nondynamically positioned rigs, and 14 dynamically positioned rigs were moved off location out of the hurricane’s projected path as a precaution.

Some Gulf Coast pipelines also had restricted gas flows, leading to further cuts to supply that’s already been hampered by the oil downturn and Covid-19 pandemic. However, much of the curtailed production is expected to ramp back up once the storm passes.

Regardless, volatility is expected to remain robust heading into the winter season, analysts said. The storage glut may take some time to get worked through, and the front of the curve could continue to face some weakness. However, the fundamentals are supportive for the heart of the winter. The Schork Group noted that during the first three days of the week, the market’s average daily statistical volatility — the likely daily price movement — in winter’s premium to next summer jumped by 28% to 5.9 cents.

“Nymex natural gas is stuck in a severe pocket of turbulence. You should expect volatility to remain high as we transition to the heating season.”

Spot gas prices moved in both directions on Friday, with some large increases seen across Texas, Louisiana and the Southeast amid Delta’s supply impacts. However, some big losses were seen in West Texas and on the East Coast on lackluster demand.

NatGasWeather said “a glancing cool shot” was impacting the Upper Great Lakes and New England on Friday, though most of the central, southern and eastern United States were expected to remain comfortable through early in the week. Showers and cooling were forecast to arrive across the Northwest over the weekend into the Midwest shortly thereafter. In the middle of the country, colder Canadian air was set to drop lows into the 20s and 30s for locally strong heating demand.

The chillier weather in New England boosted prices in the region. Algonquin Citygate gas for delivery through Monday averaged 10.5 cents higher at 92.5 cents. Most other Northeast prices were lower day/day.

Those losses extended through Appalachia as well. Dominion South fell 12.5 cents to average only 52.0 cents.

With Delta cutting slashing supply and prompting several pipelines along the Gulf Coast to restrict gas flows ahead of the storm, prices in Louisiana and across the Southeast gained ground. Henry Hub jumped 78.5 cents to average $2.265 for gas delivery for the three-day period.

Gains of 50.0 cents or more were common across much of Texas, with Houston Ship Channel rocketing some 61.5 cents higher day/day to $2.365. In West Texas, though, Waha tumbled 43.0 cents to average only 42.5 cents.

Despite the current weakness at Waha, prices could soon rebound.

The level not only represented a 230 MMcf/d boost from the already robust volume seen in September, it explained the surge in West Texas exports to Mexico to more than 1.1 Bcf/d.

The surge was a historical maximum, according to Genscape analyst Ricardo Falcon, and is driven primarily by Wahalajara’s receipts from the Ojinaga-El Encino duct that connects with the U.S. TransPecos Pipeline.

“Looking forward, we expect a potentially stronger demand pull downstream of Wahalajara by the now operational VAG and interconnecting infrastructure,” Falcon said. “If continued, the current uptrend would push West Texas border flows to Mexico closer to our projected average of nearly 1.5 Bcf/d for 4Q2020, up by almost 590 MMcf/d from 3Q2020, largely due to gas-to-gas competition against South Texas exports.”

The main driver, according to Falcon, is the gas burn for power generation by assets operated by or delivering energy to the Comisión Federal de Electricidad.